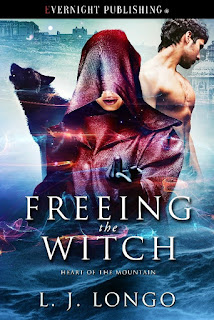 I’ve written the entire Heart of the Mountain series to prove to my partner and roommate that I can write more than super dark m/m fantasies. So, if they’ve had to listen to me complain for six months about shy people in love, it’s their fault. The challenge was to take an Enemies to Lovers and explore it with genuinely sweet people. Watching this witch and wolf learn to love not just each other but themselves has made this one of my favorite stories (and probably my best to date).

1)      Do you believe in the paranormal? If so, have you ever had a paranormal experience?


a.       I worked as a ghost tour guide for ten years, so it’s hard for me not to believe in the paranormal. Normally during the day, I’ll be all skeptical and science about it; but you put me in a dark place and night and I believe!


a.       The world started out when I asked myself how would our world and history be different if witches were real. I decided they would almost certainly be the ones in charge and I don’t mean running thing behind the scenes; I mean covens would dictate the laws of the land.


b.      Emaula’s main problem is that her mother is ambitious and wants to gain more power. Mom can either do that by having a daughter who is a full coven witch… or by eating Emaula’s potential magic. Emaula has no desire to be in a position of power and authority (she doesn’t even like looking at people with magic against their wishes); so Emaula’s gotta get away from Mom.


3)      What makes your world/character different from other books in the same genre?


a.       My wolves are a bit different than most horror werewolves and romance shifters. Instead of being cursed by a bite or having a kind of hidden clan in our world, I went back to older mythology about shape-changers. I really liked the ideas from the tribes of America about humans putting on the skin of an animal and adopting their shape. I decided since I wanted the shifters to be deeply tied to the witches it would work the other way around.


b.      All my shape-shifters are created by witches who combine the body of an animal that has a human soul placed inside it. They craft the human body to their liking and for their own purposes. However, the shifter is still his own person with his own desires, so there’s a lot of in-world conflict about them. Some communities harbor shifters who have fled their creators, but in others shifters are not-allowed to be hold jobs or handle money without their witch’s permission.


a.       Since Freeing the Witch is set in India, a lot of my early research was about their witches and their communal attitudes about oppression before they met Europeans. Their witches tended to be more gentle than their Northern sisters, so shifters in this part of the world are more normal; considered the literal children of the witches (with all the baggage that entails). Since trade is just opening to the East and North, I did a bit of research into how those ports first got built and what kind of people it took to make the first leap. I also did a lot of research on food for this novel, since Emaula and Porter are both chefs.


b.      That being said, whatever tickles my imagination goes into the book before I let historical truths limit things. So, I have cargo freighters in the story about a hundred years before they would have gotten that far south, because I liked the idea of the protagonists from the previous book Hiring the Tiger going at it in the cargo hold while their friends are kind of awkwardly aware and too embarrassed to interrupt.


5)      Is this book part of a series? Are you planning on writing more in the paranormal world?


a.       There are four books planned in the series and two are written.


b.      Hiring the Tiger, the much kinkier of the two, is about Jasprite a merchant from the East and Navarro a tiger-shifter. It’s a real love/hate relationship since they are both very much alpha-asshole personalities who take delight in humiliating each other and fighting. But when Jasprite has to leave, Nav has to decide if he wants to stay in the same town forever or go with her.


c.       Freeing the Witch is about Emaula, a witch and how she kinda finds herself as she’s falling in love with Porter. He’s a wolf in Nav’s pack, super-beta and almost as shy as Emaula is, but with a deep distrust for witches, because of his creators.


d.      I have planned at least two more books to talk about the other members of the pack.

Emaula Whispel thought she’d be happy if she could live outside her mother’s magical stone tower, but when Emaula starts working as a chef at her friend's trading post, she becomes smitten with Porter, her co-cook. Now Emuala’s magic is obsessed with possessing this quiet, charming wolf, and the budding witch has to fight to control her powers and her lust, to prevent her new friend from becoming her accidental victim.

Porter was created to serve witches by opening doors into their dreams, and he is neither surprised by nor afraid of Emaula’s magic. What startles him is that this powerful witch genuinely seems to care for something as lowly as a wolf. Now all Porter has to do is prove his love for her is not an enchantment, before her mother takes away everything Emaula holds dear.


WHERE TO BUY
Evernight Publishing
Smashwords

Time was strange in the dreams. Minutes could be hours. Hours could pass in seconds.

And somewhere someone was trying to reach him. Someone wanted him and had taken measures to have him. Was is the little girl? The Munawn’s daughter. She’d be all grown-up now and remember him fondly. She must have extraordinary power to reach him.

A light came on under a door, hemming the edges with a low purple light and filling the room with that melancholic tint. The one who had shaved her hair and wore black gemstones that glowed purple. Porter knew her name, but he refused to think it. He wanted nothing to do with them. He had been turned out. He wasn’t allowed to think of them anymore. He didn’t have too.

The door creaked open, and Porter winced. Whether he wanted them or not, one of them was coming through. He didn’t have much choice. Or at least, he wouldn’t when he saw her.

The light poured into the room, flooded it with the scents of spring, vanilla, and lavender and bluebells. Intoxicating, lulling. The smell of a beautiful woman who wanted him. The fragrance of an herb sachet dropped into cold water on a hot day and stirred.

“Oh, Emaula.” Porter hadn’t smelled any magic in the tea he’d sipped as a sign of good faith. Just like him to misread a person and get bespelled. He wished Sock had come down with him. Sock wouldn’t make that mistake.

Porter struggled against the weight of her dream world and lifted himself slowly on one arm. She hadn’t fully opened the door, yet. Was just peering through, shyly.

Emaula was not a woman; she was the moon. The shadows of the world curled around and concealed half her face, leaving only the paleness around her starlight blue eyes and the soft darkness of the purple light.

Now was the time to stop her. To say something mean. To beg her to stop. To remind her of her oath. Or to … to—

Emaula divested the darkness. Unveiled her lovely face. Freed her hair, such a fine pale gold that it shone in this dream world, illuminated her thin pink lips. Porter had forgotten how beautiful the witches could be. How the sight of them stole breath, sanity, free will.

The woman could swear there was no harm in her. How could he be harmed by her? When now all he ever wanted in the world was her.

She met his gaze and smiled timidly. She stepped into the sea of sheets and pillows, delicately moving through the luxurious silks toward his body. The black silk wound around him shimmered under the radiance of her body. His stiff cock suffocated and strained under the sleek material.

The witch would get what she wanted. He had enough experience with witches to know they always did. These women could be cruel. They could be unbelievably kind, as well. And he honestly didn’t know which was worse.

He did know there was no point in defying her. No point in not taking what pleasure he could. No point in being mean to the mistress. Had that been one of The Munawn’s mantras? Or another wolf’s good advice?

Emaula knelt beside him in the bed, her hands modestly on her knees, her eyes big and earnest. “Porter, is this all right?”

Was she asking permission? No witch did that. Had to be a trick.

He wasn’t sure what she was so embarrassed about, but she was damned cute when she was. She twisted her hands through the sheets as if she had to keep herself from touching him. “Is … is this all right?”

Was it all right? What the hell kind of question was that for a witch to ask a wolf? He wasn’t going to upset her by saying no.

The witch stroked his thigh through the sheet. His cock, already damningly stiff, pulsed at the nearness of her hand. That ought to answer her question.

He didn’t even think he wanted to say no, but how could he know the truth here? When she controlled the world? When just watching her come into the room had reduced him to nothing but a hard cock and the inner monologue of a scared puppy?

“Porter. Will you say something, please?”

L.J. is a queer author, a feminist, and a geek with an MFA in writing Popular Fiction. L.J. has an annoying tendency to ship everyone, disappear if no-one is supervising, and struggles with everything except making up stories.