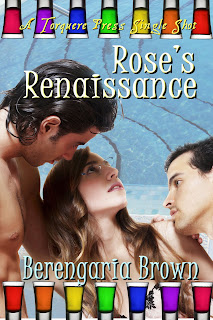 Thank you for inviting me over today, Beth. My latest release is called “Rose’s Renaissance” and it is a two men/one woman menage.

Blurb: “Rose’s Renaissance”
Rose is at the swimming pool, unhappily completing physiotherapy after breaking her leg, when she meets up with a very attractive man she saw at rehab, Oliver. Unfortunately Oliver is in a gay partnership with Kieran, an equally attractive man. Oliver and Kieran take a liking to Rose, do their swimming pool exercises together, and then go out for dinner. Dinner leads them back to Oliver and Kieran’s house where the evening ends very satisfactorily for all of them, in bed.

But Rose’s leg is not healing properly and extra measures—measures she sincerely dislikes—have to be taken. And what will happen about her growing romance with the two men?

Just for you today, here is what happens before the story opens, an outtake from the book:

Rose eyed her huge, old, white refrigerator. She rested her mop in the bucket of sudsy water and pushed her glasses up her nose.
“Well, I guess the only way to clean the floor is to move you out a bit, you big lug!”
Rose, braced both her arms against the refrigerator and pushed. It moved about an inch.
“Being stubborn are you?”
She leaned her hip against its solid white side as well as her arms and shoved again. This time it slid a foot or so out from the wall.
“Awesome,” she puffed, collecting her mop and sliding in behind it. But she couldn’t get enough room to clean the floor properly, so squeezed her way out again.
“You may be big and tough, but you won’t defeat me,” she said to the refrigerator wagging her finger at it sternly. “You may as well give up and move so I can wash the floor.”
Rose leaned against the cold enamel and shoved with all the strength in her arms and hips. The refrigerator teetered and fell pushing her body and knocking her to the floor.
Rose landed on the tiles with a crash, the refrigerator coming to rest across her left leg with the force of a ton of bricks.
“Holy shit!”
Rose tried to sit up, but the pain in her leg made her head swim and for a moment she thought her breakfast was about to reappear.
Taking a big breath, she told herself, “Come on, it’s only a piece of equipment, get up!”
Gritting her teeth she managed to sort-of sit up, leaning on an elbow, but the pain was intense and the refrigerator wasn’t moving off her leg.
“Come on woman, use your brains!” she urged herself.
Rose wiggled her upper body sideways until she could reach her mop, then pushed the head of it under the piece of solid steel and heaved. Nothing happened.
“You’re an accountant. You know math. The mop is a lever. ‘If I had a long enough lever I could move the world.’* Who said that? Someone famous.”
Rose’s head was getting fuzzy from the pain but she managed to move a little farther from the refrigerator, making the mop a longer lever, and finally she was able to pull her leg out from under it.
Her purse was sitting on the kitchen bench, her cell phone inside it. It was only half a dozen feet away but it seemed like a million miles. Half crawling, half dragging her leg, Rose reached the counter and her phone, then punched 9-1-1 for the paramedics.
Then she relaxed, lying on the floor, waiting for the sirens and help.

Just a reminder to mark it on your calendar.....

Berengaria Brown is guest blogging with me on MONDAY, Jan 31st! A talented author, she is published with some of the best, including Ellora’s Cave, Siren, Aspen Mountain and Evernight! She is promoting her newest release, Rose’s Renaissance, available now through Torquere Books! So mark it on your calendar, this Monday, and stop by again!!!

February is the month of Romance…and I have a plethora of Romance Writers for you blogging on my site!

And make sure to come back in March where we have “Reader Questions” month, asked by Readers and answered by Authors!

A Man After Midnight is released!

My novella with Loose Id, titled A Man After Midnight, has been released today! Available in ebook format, head on over and check it out! I'll be running a contest this weekend to win a free copy, so check back to see what the trivia will be!

"When a friend invites her for a weekend vacation in New York City, Caroline Grace jumps at the chance. She meets the handsome and sensual Wren Calder, and is immediately swept off her feet by the powerful attraction she feels toward him. She doesn’t hesitate to indulge in a one-night-stand, but Wren has other ideas. He proposes a no-strings weekend fling and Caroline decides it’s just what she needs to get over her divorce. By night, Wren slowly frees her inhibitions, opening her to a sexuality Caroline has long denied herself. He shows her a world of voyeurism, the thrill of sex in public, and how she loves to be dominated.

Overshadowed by the mistake she made in the past, Caroline leaves at the end of the weekend vowing to forget him. But she soon comes to the conclusion that getting over Wren is going to be a little more difficult than she thought, because she realizes just how much she’s fallen in love."
Posted by Beth D. Carter at 6:02 AM No comments: