The Red Wolves Motorcycle Club has lived by the outlaw code, until now.  When a human trafficking ring moves into their territory, they will stop at nothing to defend their women. The Red Wolves protect what’s theirs, but now they’re fighting the war with justice, and finding love along the way. 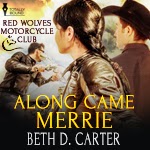 But before she can figure out if they can share a happily ever after, she has to survive the biker who’s found out where she is.  Because even if she doesn’t know what she witnessed, he sure the hell does.  And he wants her silent.


North Tabion and Givon Halloran have been friends for all their lives.  Each has survived an abusive father, only to end up on opposite sides of the law as adults.  Givon is the town Sheriff while North is the leader of the Red Wolves outlaw motorcycle club.  But they’ve managed to maintain a friendship that means everything to them.

Allison Evening is on the run, hiding out from an ex bent on vengeance and tending bar when she’s kidnapped to be sold into human trafficking.  In a desperate attempt to free herself, she runs, only to be shot down and left for dead.

North and Givon are in the right place at the right time.  They save Allis and as they nurse her back to health, the three find a bright, burning love.  But when her past catches up with her, the only way to save herself and her new found love is if she, North, and Givon can follow love’s true path.

Cade wants more than anything to tell Draven that he wasn’t the one who killed his cousin, but he can’t reveal the truth so he has to live with Draven’s hate.  When the two men find a woman half dead and bound with zip ties, they both feel a need to protect her.

Dove Aldrin is a sensitive young woman who had been abducted and held prisoner for a long time.  When she escapes, she falls into the path of two men determined to help her and find the man responsible.  What she didn’t count on was falling for both of them.  How can she pick one over the other, especially when they can’t stand each other?

Lily has almost given up believing she can escape from the clutches of the Master, the man who holds her as a sex slave in his mansion of degradation.  When she's given an opportunity to flee, she races into the night with the crippling fear that she could be found at any time.

Branch Barrigan, the enforcer of the Red Wolves MC, and Deputy Charlie Earenflight are two men who might be on opposite sides of the law, but don't hesitate to punish those hurting women.  They make a pact to hunt down the head of the human trafficking organization.  When they find Lily, they are unaware she is the link that will tumble down the walls of their mission.

Unbeknownst to him, Romeo Barrigan has someone watching his every move.  Chloe Matsumoto’s favorite pastime is studying the president of the Men of Hell MC. She’d become fascinated with him ever since he helped rescue her deaf cousin from the hands of a vicious human trafficking ring, and now wonders how she can repay him.


Daxton Squire is the Enforcer of the Men of Hell.  He’s filled with self loathing over not recognizing the threat from the former president.  When he spots someone tailing Romeo, he vows to protect him at any cost.  Only he didn't expect to be so attracted to the little stalker.

Violence sweeps through the small town of Bair, Nebraska, threatening the town and the club.  Romeo has a lot on his plate.  Not only does he have to figure out who’s after his club, he’s got to figure out how the hell he ended up in a ménage relationship, as well as keeping those he loves safe from the menace.

How can she face the danger when she can't hear it coming?


Kaiya Hanazawa lost her hearing as a child, and her family wrapped her up in a cocoon of protection.  As an adult, she was saved from a human trafficking ring, and her grandfather put her behind walls so high they became her prison.  Now, she’s free and ready to prove the angel isn't quite so innocent.

Gordon “Gabby” Dixon doesn't say a word, until he meets Kaiya.  Knowing sign language helps bridge the attraction between them, 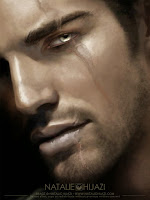 but he’d never have her without his best friend Boone Tempest there to keep the nightmares at bay.

She travels with Boone and Gabby to uncover a mystery left by the previous club accountant. Little do the three of them realize they’re being followed by a man bent on revenge.  Passion flares between them at night, but just before they’re able to reach for the happy ever after, a hailstorm of violence threatens to sweep them away.