I received this novella by Ms. Monroe herself when I won a contest.  I’d never read any of her books and while many of her titles caught my attention, this one looked too good to pass up.  And I’m so glad I didn’t because this story rocked!

As with any novella, they are short and to the point so everything that has to be conveyed is done very fast.  We start out in the middle of a Zombie attack and Vet Dr. Coralee Bradley is trying to determine how she’s going to survive.  The military had already come through and they got their asses whipped.

In comes sexy Sergeant Jordan Parks, looking for some bandages when he’s hurt fighting.  (He’s not bitten, thank goodness!)  But the horde has overrun his who unit and now it’s just Cora and him.  Sparks fly, of course, and when the Zombies turn to the vet building, they have to run to a large storage closet to hide.  Thinking they’re going to die, Cora and Jordan let lust run its course.

I won’t tell you how it ends but it’s a great set up for another book…thank goodness!  I loved this short little story but I would have been disappointed if Ms. Monroe would have stopped there.  Luckily, she’s informed me that another book is coming out later this year.

A lot of times in novellas, the characters aren’t fully fleshed out and the writing is choppy.  Not so here.  Even though it was short, and even though I wished it had gone further, this story sets up nicely as a prequel (as I’m thinking of it now).  I’m a fan of The Walking Dead and it brought to mind that story line, except with very hot sex scenes.  If you’re a fan of Zombies, or just a fan of something different, then this is the one for you! 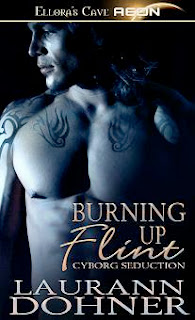 This book review isn’t for just one book, it’s for all seven.  Because I assure you, if you read the fist one you won’t stop until you’ve read them all.  I have a long list of books I’m working through so that’s the reason why I’m just now getting to review these books.  And had I known they were this good, I would have read them a lot sooner!

Book One is titled “Burning Up Flint” and like any first book in a series, it’s pivotal for setting up the tone of the forth coming books.  This book was good, not my favorite, but I’ll get to that in a bit.  Flint is a cyborg and in my opinion they just don’t make enough erotica romance books about cyborgs.

Ms. Dohner sets up a great world.  Far in the future, Earth scientists created one step above and beyond androids when they took human DNA and grew these massive warriors in cryo tubes.  Stick a few microcomputers in their heads, add a few enhanced things like strength and healing and you got yourself a breathing sentient person who demands basic human rights.  And what do the human do when they realize they can’t control their creations?  They tried to terminate the whole race, of course.  Luckily many survived by fleeing Earth and settling up home on a new world.

Flint is a commander and on a raid to steel parts and items, his ship commandeers a vessel holding Mira.  Immediately, Flint takes Mira as “his” and brands her.  Many misunderstandings later, the two finally admit their love and all ends well...with a few bumps along the way.  Now I know I summarized this into a very short couple of sentences, but I want to comment about the series as a whole, and not just this book.

Like I said earlier, this wasn’t my favorite in the series but it was interesting enough to keep me reading the next one.  And I’m glad because by the time I rolled into the third, I was in love!  My favorites have started from the third on because I think by this time Ms. Dohner really discovered this world she created and went with the flow.  I loved Iron and Coal, in particular, and the women who is able to fall in love with these two cyborg men.

Now, here’s what sets this series apart from the others.  In many series, the voice of the author never goes away.  So you read one, you’ve basically read them all, just substitute some names and bam…a finished book.  But each character in this series is unique and not cookie cutter.  Even though the cyborgs maintain a certain robotic intensity, they are written distinctly, as are the women they fall in love with.  For example, in book one Flint is in a breeding pact and must serve women to make sure children are produced.  Mira would rather die than witness that.  But in book four Ice has produced something like twenty-eight children.  In book two the female, Rena is an insurance claim investigator and in book five Jill hasn’t even finished school.  There are so many flavors in these books that there’s something for everyone.

I'm not sure if Ms. Dohner is planning to write any more, but based on this series I'm going to look in her others, notably the New Speices.

You can read more about all the books at Laurann’s website: http://www.lauranndohner.com/cyborg-seduction-series.php
Posted by Beth D. Carter at 8:20 PM No comments:

I want to give a big round of thanks to Jennifer Labelle for visiting with me this weekend!  She his here to promote Meant To Be, which is free on Amazon (June 7-9th).  To get to know Jennifer and her books better, I drew up some questions so we can get to know her a little better.


1) I read the blurb for Meant To Be and it sounds so intriguing!  Can you tell us a little more about it?
Absolutely,

Jenna Baker’s life is near perfect. She’s got an adoring husband, a beautiful son, and a wonderful family, but everything changes in an instant when a trip to pick up her son from his grandparents ends in a horrible car accident, scarring her.
Suddenly, the reality she once had takes an unexpected turn when the husband she thought was dead re-appears. Tough decisions will have to be made when deceit is uncovered and Jenna has to choose between the life she thought she had, and the new one she may have no choice but to accept…


2) I have one child & I grumble a lot about not having enough time!  How do you stay focused on writing with three?
LOL, this is such a great question. :)
As you know, being a mother yourself, my number one job is being a mom, but writing is my passion and now that all three of them are in school I try to write then, or at night once I've got them all sleeping.

3) I read that you have an education in addictions work.  Have you ever been inspired by anything in your work with addicts?

My degree in Addictions Work began for personal reasons that I don't regret, but no, it hasn't inspired my work as of yet. But you never know...


#4) What made you decide to do this fabulous give-a-way for Meant To Be?

Well, it was my birthday this past Tuesday June 4th, and I thought what better way to help celebrate my 33rd than to give my readers a FREEBIE. It's also a great opportunity to meet new people and draw more interest too. So it's a win/win. :)

#5) Ebooks have really reshaped how we find authors and books we read.  How do you reach your audience?

Thank you, Jennifer, for visiting Written Butterfly!  I can’t wait to get my hands on Meant To Be!  You can download it for free at Amazon...here is the direct link through Amazon:
http://www.amazon.com/Meant-To-Be-ebook/dp/B004OYTSHE/ref=sr_1_1?ie=UTF8&m=AZC9TZ4UC9CFC&s=digital-text&qid=1298595348&sr=1-1

I'd like to thank everyone for joining me today. Please enjoy this excerpt below, and grab your copy of Meant To Be as soon as you can. Please feel free to SHARE, SHARE, and share some more too!

Excerpt:
He smiled again, taking the last plate from her to dry and shook off the extra suds. Drips of water and soap suds flew through the air getting her wet in the process, and he laughed at her shocked expression.
“Oh, really,” she said in the mood to play. Taking the sprayer hose from the faucet, she turned it on and gave him a squirt. She laughed, and it was his turn to pause in shock.

She could tell by his expression that this meant war and made a run for it, laughing the whole way. She made it into the living room before he extended his arm to catch her, swooping her up as if she was feather light.

“Got ye.”
They both laughed, but when she turned to face him, he became serious suddenly. She knew then that the games were over. He brushed a strand of hair from her face and pulled her towards him. Slowly moving his face closer, his eyes sparkled and completely absorbed hers.
The kiss started out slow, and she wanted him to take his time with it. She held back a groan when his mouth pulled away and pulled him tighter against her. Her adrenaline pumped faster, and she could feel the warmth coursing throughout her body. There was no thinking twice about it; her desire consumed her.
Pushing him against the wall, she kissed him hard, wanting him in that moment more than she’d ever wanted anything. She liked where this was going, liked being in control, needed it in that moment.

Placing her hands on his chest, she slowly moved them down his beautifully sculptured abs. “Stay,” she whispered, taking a step back so that he could watch as she unzipped her dress. It slowly slid to the floor exposing her bare breasts and the sexy black thong she wore. She kicked it out of the way, pulled his shirt off, and pressed herself against him again, flesh against flesh.