March and A New Beginning 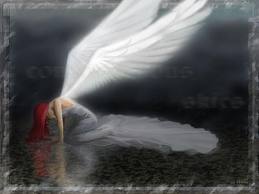 My father died on February 27th, 2012, and it was absolutely horrible watching his body implode on itself.  I had to fly from Southern California to Springfield, Missouri where I was told my father was at Mercy Hospital in ICU.  He had had emergency surgery the day before because there was a "mass" on his esophagus, which turned out to be a lump of food that escaped from a perforation in the esophagus lining.  The food collected, growing, and eventually turned his esophagus necrotic, and because the tissue was friable, they couldn't reconnect it to his stomach.

He was on a feeding tube, on a J-tube (which takes away the "waste"), on a ventilator, and had tubes coming out everywhere to help drain all the fluids that were backing up in his system.  It's a horrible thing, to see your father like this.  A man who had always been big and strong and larger than life.  I came late to his life, being 45 when I was born, so there was this disconnect with him.  I was a typical teenage daughter and he was old school.  And now, being older and wiser, I regret not being able to talk to my father on that level.  I was fortunate to have a few days to talk to my dad, to say all I needed to say.  And though he couldn't talk to me he was able to look at me as well as squeeze my hand.

I was lucky.  I had closure.  And also lucky for me, my father took certain issues out of my hand.  I didn't have to make the decision to keep him on life support, my father had already made out a living will with a DNR.  All I had to do was agree with the doctor.  So on Monday, February 27, his ventilator was removed at 10am, along with all the medications that were keeping him alive.  My father lasted four hours and when he died I was holding one hand and my step mother was holding the other.  None of my siblings were there, none of them had the guts or the balls to watch him die.  Truth is, neither did I, but I refused to let my father leave this life not surrounded by love.