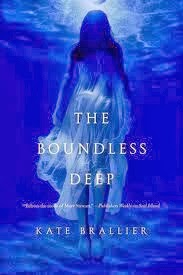 The Boundless Deep by Kate Brallier

Every once in a while I read a book that just captivates me and stays with me lost past THE END.  These types of books I wish never ended because they are so wonderfully written, and The Boundless Deep is just such a book.

I read this book several years ago and I have it in my personal library.  For those of you who've read my past reviews, this is a high honor indeed because paper books now-a-days are damned expensive, so I only buy the ones that are truly magical.

This is a love story that crosses the division of death into the realm of reincarnation.  Set amidst the era of whaling in Nantucket, it is told superbly in first person narrative.  I happen to love first person because it immediately puts me into the character's shoes and I love becoming the heroine of the novel.  Now, this review might have a bit of spoilers in it but I'll try not to give too much away.
Liza has had dreams of whaling her whole life, despite never having been to the ocean.  So she jumps at the chance to spend the summer working in Nantucket with her roommate and friend.  She has the idea that somehow she can disprove how accurate her dreams are, but quite the opposite happens.  Not only can she spout facts about sailing, she can identify even the most obscure piece of equipment.  Her dreams have revved up a notch as well.  Every night she dreams of Obidah Young, a whaling captain from the 1840’s accused of murdering his wife.
Liza’s summer in Nantucket is filled with work and romance.  She meets Adam, a museum guide, who has his doubts about her reincarnation theory.  There is also Lucian, who uses his sharp tongue to defuse the sexual tension between him and Liza.  The book is filled with memorable characters that help Liza solve the mystery of her dreams of who she used to be. There is a twist to the story, one I won't reveal, but it had me guessing up till the end.
Ms. Brallier does a terrific job of differentiating between Liza of 1840 and present day by changing how she “talks” in the dreams, from very formal to modern day slang.  But beyond how well this story is brought together, what really captures the reader is Nantucket itself.  The author really did her research on bringing to life the city of old.  It's made me put Nantucket on my wish list of places to visit, to find all the spots she wrote about and pointed out in the novel.

Fans of paranormal romance won't be disappointed this one, even though it doesn't have vampires and werewolves.  I've always been fascinated about past lives so the mystery surrounding Obidah and Liza really packs a powerful one two.  This is one of those books that beautifully blends a mystery, a romance, a historical and a paranormal all in one.

**Also, this book is a companion to Ms. Brallier's first novel, Seal Island.  The main characters from that novel make a cute appearance in this one.


Grad student Liza has long been plagued by vivid dreams of whaling. Offered the chance to trade her land-locked existence for a summer on Nantucket, the well-preserved heart of New England’s whaling trade, Liza jumps at the chance, eager to see how well her dreams mesh with historical reality.
The answer is: all too well. Liza’s dreams become highly sexual; her visions of ship’s captain Obadiah Young grow increasingly intense. At times the past and present mix before her eyes, with automobiles replaced by horse-drawn carriages.
Though skeptical of Liza’s claims of a past life, whaling museum curator Adam is drawn to Liza’s intense desire to know the truth—about herself, and about Obadiah, accused of murdering his beautiful, young wife.  But Adam isn’t the only man with an interest in Liza—handsome Lucian, whose home Liza is sharing for the season, has designs on her as well.
In a single summer, Liza must answer the riddle of her dreams, reunite lovers separated by death, solve a hundred-year-old murder . . . and figure out her heart’s desire.