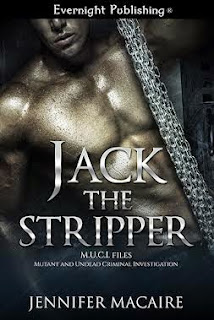 I was at a book conference in Germany and a bunch of us were talking about zombies. One of the people was a male model who was regaling us with tales of his stripping debuts, and we were howling with laughter. Somehow strippers and zombies got mixed up in the conversation, and Kris Alice, a friend of mine, told me I absolutely had to write the story. After that, it was all downhill – or uphill? At any rate, it took off from there!

The series is called M.U.C.I., or Mutant and Undead Criminal Investigation. It's ultra secret, so everyone knows about it, especially the people living in the huge trailer park right next to it. In this parallel universe, in a city reminiscent of New Orleans, mutants and undead live alongside humans. Rare and discreet, they are nonetheless required to register with the Mutant and Undead Branch of Interpol to get passports and social security, (pink cards for vamps, yellow cards for shifters, and purple cards for zombies...).  At MUCI (or moosie as it's fondly called), a dedicated bunch of humans, undead and mutants work hard to keep everything running smoothly and keeping everyone more or less within the law.

I'm lucky, I don't have to dream about that - right now I'm in the middle of brainstorming with a good writer friend, Brandon Rucker. We've been in contact for many years now, starting with the old Zoetrope online writing workshop! We've decided to do a project together, and so, for now, we are tossing ideas back and forth like tennis balls all the while trying to juggle our jobs, our families and our writing – honestly, there are not enough hours in a day!

Well, my immediate goal is to finish the third book in the M.U.C.I. series, and also to finish a YA book I started called the Road to Eternity, hopefully it won't be an eternity before it's finished. Brandon and I are also keen on doing a book together (or several books) but for now, the story is still in the outline stage, and we're still arguing about who gets to start it, - lol. I usually have three or four ideas simmering, and I always have a book in hand or in my purse (I carry my e-book reader with me everywhere) because I am a voracious reader. Reading good books is one of my best inspirations for writing!

JACK THE STRIPPER by Jennifer Macaire

Thank you having me here! I’m so excited to be sharing my book JACK THE STRIPPER with you!
Jack's back from the dead. His mission? Catch the Heart Taker, a mutant terrifying human and undead alike. Jack teams up with his ex-girlfriend Brianna and a hot zombie named May to catch the killer – but he has to hurry, the Heart Taker has chosen Brianna as his next victim.

Welcome to The Purple Dee. Pull up a chair and get settled in, the show will start soon!

Our featured performer tonight is Jack the Stripper. He's Jack Severn, newly back from the dead. He's magical, he's hot, but evil he's not!

Jim Ling-Li, Necromancer extraordinaire, brought him back to life, gave him some extra features, and, as you'll see, made him irresistible --

Especially to Jack's ex-girlfriend Brianna. Jack's sexier than ever, and they're better together. But she doesn't want to risk her heart, not again, and definitely not with a zombie.

Jack also has a mission. He's back to catch the Heart Taker, the mutant that's been terrifying human and undead alike. His current obsession's none other than Jack's Brianna.

So give a big hand for Jack...he's going to need all the support he can get to catch his own murderer.

*Jack the Stripper was origianally published by Loose Id as "Zombie Jack". It has been re-edited and re-issued by Evernight Publishing.

Excerpt:
His arm fell off again. The first time it happened, he’d been holding a heavy suitcase. A woman noticed and let out a horrified scream. He looked down. The suitcase lay on the ground, his hand still gripping it.
“Ahhhh!” he screamed too. Suddenly everyone in the bus station was either screaming or running. Panicked, he grabbed his arm, first having to pry his fingers off the suitcase, and fled.
With the bus station far behind him, he slowed down and tried to take stock of his situation. He was lost. His arm had fallen off. Well, it could be worse. At least he hadn’t lost it. He took his shirt halfway off and popped his arm back into its socket—getting it backwards the first time.
It was so bizarre. His arm was like part of a toy that popped in and out of its socket. A strange, magnetic, magical effect held it together. At least he didn’t feel any pain and it wasn’t too gross once you got used to seeing bare bone and muscle. No blood. No pain. No suitcase—he’d left it in the bus station. No clean clothes. A raindrop landed on his nose. Then the sky opened up and let down a deluge. Great.
Hunching his shoulders against the rain, he hurried down the street. A sort of whispered tingle ran through his body, urging him this way and that. It was the same sort of tingling pull that made him go to the bus station. It had led him this far—he might as well follow it to see where he’d end up. The mysterious force coursing through his body tugged him along, and then spun him around and pushed him into a dark, narrow alleyway.
He looked around. At one end of the alley was a dumpster. At the other end was the quiet street where he’d arrived. He knew where he was. Things were starting to fall into place.
He waited a few minutes, but no one had followed him. He sighed, and went to the green door. He tried the handle, but it was locked, and when he pulled it, his arm fell off again.
Depression and dismay rolled over him. He bent down, picked up his arm, and put it back in place. Nothing was going right. He kept hoping he’d wake up from the nightmare he found himself in, but it wasn’t happening. He was dead, and he had no place to go except here. Timidly, he rapped on the green door. No one answered, so he knocked harder, and then, when the door remained shut, he made a fist and pounded with all his might.
After a few moments it opened and a man with long blond hair down to his waist peered out at him. The man rubbed bloodshot blue eyes, yawned, and then said, “You’re too early for the audition. It won’t be for another couple hours.” With that, he shut the door in Jack’s face.
Audition? Jack blinked, backed up, and looked more carefully at the green door. Taped to the door was a sign. “Auditions. All day Sunday.”
He rapped on the door again, and the blond man opened it. He looked cross. “Look man, it says starting at 2 p.m.”
“It says all day Sunday,” said Jack. “Is today Sunday?”
“Of course.” The blond man looked perplexed. “All day Sunday? Let me see that.” He stepped out and examined the sign. “Right.” He looked at Jack. “Wait a minute.” He went inside. A minute later he was back with a felt-tipped pen. Carefully, he blacked out the “All day” and wrote, “Starting at 2 p.m.”. Putting the top back on the pen he nodded. “Better.”
“Could I wait inside?” Jack asked. “It’s raining.”
The blond man had been about to shut the door. He scratched his head then shrugged. “All right. You can wait in the lounge. Follow me.”
Gratefully, Jack entered the building where he was pretty sure he’d been killed.

Review:
"...The story is really enjoyable as Ms Macaire deliciously brings on the zany dark humor in a manner that really appeals to the fan of the macabre in me. The humor is not too overpowering or too farcical

- just enough to keep me laughing. There is already a beautiful kind of poetry in the premise, what with a hero who lacks a heart, but is in love, and who is supposed to be dead but ends up a hero instead. The story doesn't disappoint in delivering a fun Tim Burton kind of romantic adventure where I am concerned."

Jennifer Macaire lives in France with her husband, three children, & various dogs & horses. She loves cooking, eating French chocolate, growing herbs and flowering plants on her balcony, and playing golf. She grew up in upstate New York, Samoa, and the Virgin Islands. She graduated from St. Peter and Paul high school in St. Thomas and moved to NYC where she modeled for five years for Elite. She went to France and met her husband at the polo club. All that is true. But she mostly likes to make up stories.

Find Jennifer on the Web:
Website – email
Posted by Beth D. Carter at 6:58 AM