Ravenna Tate talks about her series The Weathermen! 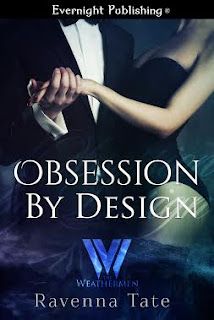 Emmett Radcliffe is one of the Weathermen and we met him book one – An Appetite For Blackmail. Liane is a new employee of his, and I wanted the dynamics to be explosive and possessive on Emmett’s side, but unsure on Liane’s. Both characters lost something from people they loved. Emmett never had his parents’ approval, and Liane lost her husband and infant daughter before everyone was forced to move underground. Each one needs to come to terms with those losses before they can love one another.

Oh yes! This is book two of The Weathermen. The year is 2124 and something has gone terribly wrong with The Madeline Project. Designed to control weather, the computer program is now functioning on its own, thanks to a virus called Tommy Twister. Earth’s surface is bombarded with unpredictable, spontaneous severe storms. If you’re not underground, you have little chance of survival.

Several teams of storm chasers from all over the planet risk their lives trying to collect data during the storms, in the hopes it will help researchers shut down the program. Meanwhile, a group of men work behind the scenes controlling all of Earth’s communications systems. They have the power and the money to keep the Storm Troopers supplied with equipment and the latest technology, and they will stop at nothing to find the hackers responsible for sending The Madeline Project rogue.

Ruthless, greedy, and powerful, these men were at the top of the communications industry when The Madeline Project turned into a nightmare, and they still run their empires. Living underground hasn’t changed anything for them. It’s only increased their supremacy and reputation. They call themselves The Weathermen…

Nearly everyone I’ve ever known has made it into the personality of a character, at least in part. Otherwise, most of what I write has never happened to me, but some of it has happened to people I know.

There are twelve books in The Weathermen series, and I’m currently finishing up book four. I have a free read planned for submission to Evernight that is a follow up to Snowbound, and I have two series in outline form. One is a contemporary series and the other is a paranormal series.

On her first day working for Emmett Radcliffe, President of Radcliffe Software and Web Design, Liane Peyton learns that Emmett hired her not only for her design skills, but for her coding abilities. Liane finds herself building a secret database for Emmett and his friends, but saving the planet isn’t Emmett’s only obsession. He has his sights set on Liane, and he will stop at nothing to have her.

Emmett is part of a group of friends financing the efforts to put a stop to The Madeline Project. The program now has a mind of its own, thanks to a virus called Tommy Twister. These men have power, resources, and money, but they’re as ruthless and possessive as the storms ravaging Earth.

She pushed her hips against his erection and moved her tongue over his, imitating his movements. She needed this man inside her right now or she was going to die from desire. Was that possible? It had to be, because she’d never felt such intense longing.

His mouth still on hers, he backed her up against the sideboard and then released the kiss. “Turn around.”

Once again, she obeyed without hesitation. Emmett leaned her over the furniture. He tugged her hair until her head was back, and then he licked her neck. “I’m going to fuck you, Liane. And you’re going to take it.”

She cried out in pleasure as he moved his other hand over her ass, giving each cheek a couple of hard smacks. The dress wasn’t thick, and it stung, but she absolutely adored it. He let go of her hair and pushed the dress up, revealing her ass. “Oh yes. I knew you had a nice one.” His hands caressed her cheeks, moving down the backs of her thighs and up her lower back. “You are exquisite.”

Liane didn’t answer him. She couldn’t. All she could do was close her eyes and absorb the sensations. Never had she been taken like this. This was heady and raw. It sent her emotions spiraling out of control and her arousal to places it had never gone.

He told her to spread her legs a bit, and then he slipped a finger into her ass crack and underneath to her throbbing clit, over and over, until she pushed back against him and writhed against his touch. “Please…” she whispered.

His lips grazed her neck. “Please what?”

Emmett slid a finger between her moist folds and Liane cried out again as fresh desire raced through her. “You are soaking wet.”

Her exhale came out in a shudder, and when he pushed his other hand into the opening at the front of the dress and placed it over her left breast, she began to whimper. He rolled her nipple between his thumb and forefinger while she shook her head back and forth, silently begging for release.

“I wonder how these taste.”

“Tell me what you want, Liane. In detail. Or I won’t do anything more than I’m doing right now for the entire night.”

How the hell did he have this kind of control? Was he human?

He chuckled, and shivers ran up and down her spine. Emmett gave her nipple a squeeze, and the tiny jolt of electricity it sent straight to her clit forced a loud moan from her. “You’re going to have to do better than that, gorgeous. Come on. Use your imagination.”

Shit. He was going to torture her with sex. “Okay. I want you to lick that.”

Another squeeze, this one tighter. She cried out again. “That what? Use real names. Come on, Liane. You’re a grown women with a lush body. Own it. Tell me what you want me to do to every square inch of it.”

“Spank me more. I loved that. And lick my nipples. And suck them. Please.”

“Good girl.” His hand moved to the other breast, where he proceeded to tease it in the same way. Then he slipped a long finger into her pussy, slowly, while she let out a long moan. “Don’t stop. Tell me more. What else do you want me to do to you?”

“Fuck me. With your tongue, your fingers, and your dick.”

“Good girl. Very good.” He moved his finger in and out gently, and the movement sent shock waves straight to her clit. She was going to come. No doubt about it.

He kissed her neck. “Yes you can.”

“You mentioned tying me to your bed.”

“Yes, I did.” That voice! It washed over her until no other sound existed. “Tell me about that. What do you picture when you think about it?”

He moaned softly as he continued playing with her nipple and her pussy. “Is that true? Tell me about them. Please, Liane.”

The realization this was turning him on just as much sent her excitement level through the roof. “I want you to tie me down and spank me, and then fuck me silly. Fuck me until neither one of us can breathe.”

“Oh my God. You shall have your wish, beautiful lady. But first, if I don’t get inside that hot, wet pussy I’m going to come in my pants.”


***CLICK THE IMAGE BELOW TO MEET ALL THE WEATHERMEN***