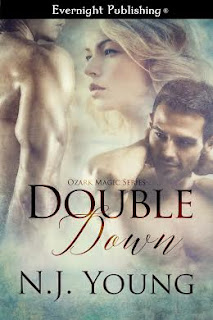 Hello!  Thank you so much for visiting Written Butterfly with me today!
Thank you for having me on your blog today! I appreciate the opportunity to introduce myself to your readers and talk about my new release, Double Down! Double Down is the first title in my Ozark Magic series. In the first book, you will meet many of the interesting characters that live in the lake resort town of Magic, Missouri. Magic is full of love, adventure, super hot guys, and the occasional murder…

Q) How did you dream up the dynamics of your characters?
The first four books in the series are based on four best friends. I thought it would be fun to explore the personalities and lives of four women who are extremely close, yet very different. I love being able to explore different personalities and present women who have different types of strengths. And for the romance aspect… well, I love to read ménage, so that is just a favorite fantasy of mine to incorporate. I love the idea of presenting unconventional love stories.

Q) Is this book part of a series?  If so, can you tell us about it?
Yes! Double Down is the first book in my Ozark Magic series. The setting is Magic, Missouri, which is in the Lake of the Ozarks area. Magic is a small lake resort town, which is home to all kinds of crazy characters whom you will meet throughout the series! Even though Magic is a small town, there is still room for tons of drama, lots of super hot ménage sex, and the occasional murder…

Q) Can you give a fun or interesting fact about your book?
The first four books in the Ozark Magic series are based on four best friends – Izzy, Andrea, Tessa, and Jillian. The personalities of these four women are based on myself and my three best friends from college, but I won’t tell you which is which. ;-)

Q) What gave you the inspiration for your book?
I absolutely love romantic suspense, and my mind is always spinning stories. The Lake of the Ozarks area is one of my favorite places. It’s so beautiful down there and so romantic! With it being a resort area, there are many different businesses, activities, events, etc. There are just so many different settings in this one town for all kinds of different stories to take place.

Q) Do you have any habits that get you in the writing frame of mind?
I have to have background noise to be able to write. I cannot concentrate if it’s silent, so I always have music on. But it has to be something that’s more like white noise. If it’s music I’m really interested in, then it will distract me. (My husband finds this habit very odd.) J

Also, if I’m writing a sex scene, I play love songs, read some great love scenes from some of my favorite books, and sometimes look at some suggestive photos and videos on Tumblr to get in the mood.

Q) Do you plan all your characters out before you start a story or do they develop as you write?
I do plan out the major characters in advance. I write a brief backstory for my major characters, and I write an outline before each book so I know where I’m going and the important points I need to make sure I hit. I have the first four books planned out in my head, so I am throwing in a few things now and introducing characters who will come into play later in the series.

Q) What are your upcoming projects?
I have the second book in the Ozark Magic series about half-written. My goal is to have it submitted to Evernight by the end of the year. It is the story of Andrea, Theo, and Flynn—all of whom you meet in Double Down. And here is a scoop for you… the title of the second book is In Too Deep!

Blurb
Izzy Craig might live in a town called Magic, but her life is anything but. After nursing her beloved grandfather, he has passed away, leaving her to manage a busy lake resort and an unrequited crush on the town’s sheriff, Graham Nolan. Things start to look up when Graham’s estranged brother Chris comes to town. If she can’t have one handsome Nolan man, maybe his twin will do.

Graham’s feelings for Izzy have always been complicated . . . and intense. When he realizes that his brother has encroached on his territory, he’s not sure if he can deal. They’ve tried sharing a woman before, and that ended in heartache for everyone. But when Izzy’s sketchy uncle enters the picture, Graham’s cop senses go on high alert. He may very well have to trust his brother, Izzy, and himself, if he wants to keep the woman he loves safe.

Excerpt
Her soft lips pressed against his mouth, causing Graham’s eyes to widen in surprise. He’d sensed her unease, so her sudden aggressiveness took him aback for a moment. She wanted them? Was that what she was saying with this kiss?

Stepping forward, Izzy pressed her body against his and he groaned at the feel of her firm breasts pressed against his chest. When her tongue hesitantly probed through his parted lips, he would have lost control if it weren’t for Chris standing behind her dramatically clearing his throat.

Grasping her shoulders, it took every ounce of strength in Graham to push Izzy away and plant her back on her feet. Her lips were slightly swollen, and her blue eyes had darkened. Before he could catch his breath to speak, a stunned look crossed her pretty face.

“I – I’m sorry. You said this wasn’t the right time. Obviously you don’t want to – I – I shouldn’t have. . .” She trailed off, trying to step away, but both of them reached for her at the same time. Dammit, he hadn’t meant to upset her.

Looking to his brother for help, Graham was relieved when Chris leaned into Izzy without hesitation, easing her worry.

“You have to tell us, baby,” Chris murmured against her ear. “Trust me, we want nothing more than to kiss your pretty lips until your head swims, but you have to tell us what you want first.”

“I don’t want to guess wrong,” Graham agreed, reaching for her hand and entwining his fingers with hers. “It would be easy for us to just take you, toss you on the bed, make you come over and over.” He stepped closer to her as her eyes started to glaze at that statement. “And maybe that’s what you want. Us taking you without you having to actually make the decision.” He brushed her swollen lips with the pad of his finger. “But it doesn’t work that way, sweetheart. You have to tell us what you want.”

“But – but – I thought you liked to dominate.” Damn, that low, breathy voice did things to him.

He had to bite back a groan. The thought of dominating Izzy, tying her up, spanking that pretty round ass caused him to harden to the point of pain. “Baby, I need to know that you want us – together – as much as we want you. We need your consent, Iz. And once you do consent, you should know that we won’t go easy on you.”

Her jaw dropped open a bit as her eyes dilated, and Graham grinned as she tried to figure out what he meant. Behind her, Chris gave him a sly smile.

“I – I —” she stammered, and then bit her lip and took a shaky breath.

“Deep breath, sweetheart,” Chris crooned, his lips finding her ear again. Graham shot him a warning look. If he didn’t quit kissing her, she wasn’t going to be able to form a thought, much less words.

“I – I want you.” Her breathy voice was barely audible, and he stepped close enough to press himself against her, sandwiching her in between himself and Chris.

Taking another long shaky breath, she tried again. “I want both of you – to – to make love to me.” The way her milky skin flushed led Graham to believe that she’d never actually said that to a man before, never asked for what she wanted.

Her words empowered him. She wanted them. She was theirs. He leaned forward to take her lips, cupping her face in his large hands so he could tilt her head how he wanted. His tongue traced the line of her lips until they parted, allowing him access. He swallowed her light whimper as his tongue delved deeper. And she kissed him back. Oh how she kissed him back. When her hands clutched at his arms, he eased back, gently nipping her bottom lip.

“Chris,” Graham spoke to his brother without looking away from Izzy. “Undress her. I want her naked.”

Her breath caught in her throat, and she jerked her head back to look at Chris who smiled wickedly. “With pleasure.”

As Graham backed up to allow his brother room, Chris walked around to stand in front of Izzy. He jokingly rolled his eyes at Graham. “He can be a little bossy,” he said to her with a wink.

Graham watched as his brother ran his hands lightly down her arms, before lifting her arms over her head. He quickly stripped off her black blouse before tugging off the khaki pants she wore.

When Chris stepped back, he darted a glance at his twin, and Graham could see that his eyes were as molten as he felt inside.

Izzy stood before both of them in only her black bra and panties, looking from one man to the other as their steel gazes swept up and down her body, ravenously consuming every inch of her. When a shiver went through her, Graham reached out to envelop her in his arms. “Are we making you nervous, sweetheart?”

She shook her head, a little smile playing at her mouth.

Chris reached out, needing to touch her, and Graham passed her off to his brother. “Are you sure? I know we can be a little overwhelming.”

“What, baby? What’s wrong?” Graham asked. When her gaze slid away, he lifted her chin up. “Look at me, Iz. What’s wrong? You need to be honest with us or I will smack that pretty ass right now.”

The brief flaring of her eyes told Graham she would enjoy a spanking, his hand pounding her ass. Now, there was some fun they could have later.

About N.J. Young
N.J. Young has been a writer since she was old enough to hold a pencil. After realizing the trials of corporate America weren’t for her, she decided to leave that world behind and pursue her true dream of writing.

Instead of spending her days writing sexy texts to her husband and engaging in “that’s what she said” jokes, she took that energy and poured it into her books. Sprinkle in a couple of hot guys, a little suspense, and a few sexual fantasies, and her first book was born. She now spends her days drinking coffee at her computer, while diving into the adventures of the imaginary friends who live in her novels.

N.J. Young was born and raised in the Midwest, and currently resides in the Kansas City area with her husband, two children, and a menagerie of animals. When she’s not writing, she enjoys horror movies, live music, cooking, and telling her kids why they can’t read mommy’s books.

Stalk N.J. Young all over the Web 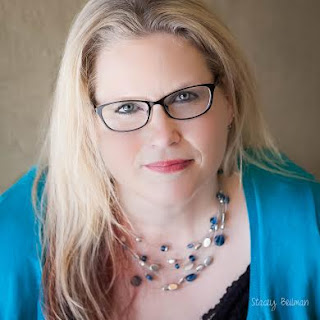