WELCOME JACEY HOLBRAND & ELIZABETH MONVEY! I'm extremely thrilled to have both of these Evernight authors on my blog today, who write a very unique twist in M/M erotica sci-fi romance. Their stories are of male pregnancy, or Mpreg, which is a hot trend right now that not many authors are delving into.  First up is Elizabeth, who was kind enough to answer some questions, and then Jacey talks about how she and Elizabeth collaborated on ideas.

Q) How did you dream up the dynamics of writing Mpreg?

Actually, the senior editor at Evernight suggested it me, and then one day at coffee, I brought it up with Jacey, who had similar ideas about the concept.  From there, my first Mpreg story, My Pregnant Boyfriend, grew.

Yes!  My Pregnant Boyfriend was part of the My Boyfriend Is…series, and the current books I’m writing now are called the Divergent Species series.  The first book, The Bear’s True Mate, leads us into a world were genetic manipulation between shifters are possible.

I’ve had to plan out the Divergent Species books because the last book ties into my short story, Outlaw Wolf, in the Bad Alpha: Manlove anthology edition.

Q) What drew you to this unusual genre?

I like that it’s a subject that hasn’t really been explored yet.  There aren’t that many authors writing it, so it was a challange.  For me, though, I have to make it believable so I had to come up with a logical, scientific explanation on how a man might become pregnant.  With the first book, I simply used the “nature finds a way” method.  With The Bear’s True Mate and Declawed, I wanted to explore how in nature, some males can give birth, or some genders can switch when needed.  The research was fascinating.

Jacey and I might write the same genre, but we use completely different concepts on how to achieve the male pregnancy.  If you’ve not read The Agency books, I highly suggest you do so.  They are spooky, and scary, and whisk you into that place where the boogeyman hides.  I LOVE her books! 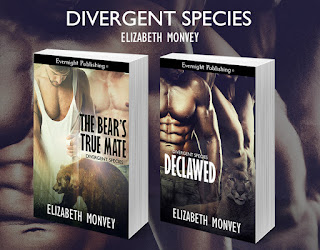 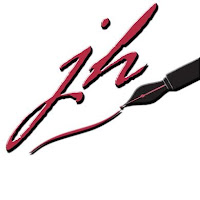 Hi everyone! Big thanks to Beth D. Carter for having me on her blog today to talk about my male pregnancy stories and how they came about. :)
In the fall of 2014, my friend, Elizabeth Monvey, and I had been talking about the stories we planned on writing and trying to figure out what the “next big thing” would be and what readers would find different and interesting to read. As the conversation ensued, the subject of male pregnancy came up. We both thought the topic had possibilities, but how would we make men get pregnant in our stories?

I’d already started a series called The Agency with the male-male, sci-fi story, ‘The Encounter’.

I’d planned on doing a mix of paranormal and science fiction stories for this particular series, but after talking with Elizabeth, I decided The Agency would lean more toward sci-fi. My muse came up with the idea of alien scientific experimentation in which the aliens make men pregnant.

With each story, I’m trying to create different ways the aliens impregnate the men to keep things interesting. Also, in changing up how the series would be, another alien race came into the picture along with a conspiracy theory one of the characters is trying to solve. So far the books are as follows: ‘The Encounter’ where readers are introduced to the alien race through Evan’s abduction; ‘Breeding Seth’ where we discover how Seth is taken and impregnated; and ‘Cooper’s Condition’ in which Cooper is snatched and winds up pregnant. I’ve had a rough year writing wise with a lot of personal stuff that’d cropped up, but I’ve been pecking away at the fourth story in The Agency when I can. Hopefully I’ll be wrapping up ‘Mason’s Mijos’ and submitting it soon. It’s a male ménage with a few paranormal aspects on top of the science fiction stuff. ‘Mason’s Mijos’ will reveal the other alien race and delve more into the conspiracy aspect as well as have some more mpreg goodness. Then it’ll be onto the last book in The Agency where everything will be wrapped up. After that, I’m thinking of doing a spin-off series involving the alien races and the earth/star children, but we’ll see how time tells. ;)
And, to think, all this came about from having a cup of coffee with a good friend. Thanks, Elizabeth! :)
Big thanks to you too, dear readers, for taking time to read our stories and wanting more.
Love & blessings to all, Jacey

For more buy links, visit Jacey’s website: https://jaceyholbrand.wordpress.com/
Also find her on Twitter at https://twitter.com/JaceyHolbrand
Bio: Jacey Holbrand believes life and love comes in all forms and should be celebrated. She’s committed to her muse and writing so she can share her stories with readers. Hot days. Sexy nights. Come play in her world. Jacey loves to hear from readers! eMail her: JaceyHolbrand@gmail.com
Posted by Beth D. Carter at 8:28 PM