Q & A with Elodie Parkes on her new release Deep Dream! 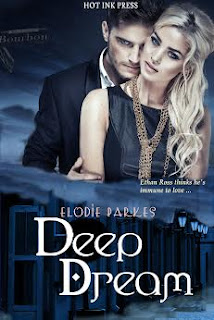 Ethan Ross, my hero in Deep Dream was so immediately real to me as I had the story idea that the dynamics between him and my heroine Anna Prideaux just fell into place.
He’s as immediately drawn to her as she is to him, but he’s fighting the attraction as hard as he can. That’s what leads to how he misbehaves and how Anna gives up on him and falls for Remy Dubois’s charms.

I originally thought I’d write more StarZ club stories, but then in Deep Dream I gave characters happy endings and I think, if there’s another story, it will move away from StarZ, the rock club.

When I originally designed the cover, I had a base scene in mind of a New Orleans street. However when I came to buy the graphic the photograph had been categorized as editorial, meaning I couldn’t use it for commercial purposes. So, I bought another street scene and other graphics to make the base of the cover look almost the same as the one I’d wanted and then hunted down my couple to smoke into the scene, giving a dreamy effect. I hope. (Smiles)

I’m always getting inspiration from just odd things. Ethan my vampire character inspired the whole story when I saw a 1920’s flapper dress covered in fringes and so pretty, I associated it with his turning point in life and the lover who’d abandoned him all those years ago.

None at all. I’m always desperate to write. I never have enough time for everything because I work such weird ‘day job’ hours and so after a few days when I haven’t had time to write I start being depressed.

I don’t actually … my characters are suddenly just with me as is most of the story. I’ll see something, a road sign (Swoop on Love), a decorative door (The Black Lion), a building (A Dom for Patti), a paddock full of horses (Night of the Horse) and bam I have a story. I once had a story fall into my mind from a strange misty white patch that showed up on the outside of my patio doors. It inspired, Forever Blue. Stories are just there and then its hell for me until I write them because they nag me. (Laughs)

Sex scenes have some real life stuff in them. Scenery, places and emotions , they’re ofetn composite of what I’ve seen in real life.

I‘m writing Tom Venn’s story, The Venn Pack in Love 4 for Siren and that has to take precedence soon.

I have a Sci-Fi/fantasy romance that I’m desperate to finish and a couple of other projects sitting in folders on my computer with a couple of chapters written and no time yet to write them.

This story concept was originally formed for a proposed series. Now it has been completed revised, lengthened, and re-edited for Hot Ink Press.

Ethan Ross, the vampire hero, has been in New Orleans since his girlfriend and sire, dumped him in 1922. He's used to the weird undercurrents of the city and now works in StarZ that caters to the supernatural folks. His band, Deep Dream, play there. He's tasked with taking care of the 'ordinary humans' that arrive in the club and he does this happily ...

With a broken heart to heal Ethan swore off love long ago ... that is until starry eyed Anna Prideaux wanders into his life.
Then sparks start to fly ...

She watched him disappear into the gloom. Anna stood and scooped her phone from the counter. She glanced around to check who might be watching her. When it looked like no one was, she quickly followed Marcus. She quickened her pace as she lost sight of him in the swirling mist at the back of the club’s main room. Marcus disappeared.

When she reached where she’d last seen him a shiver spiked up her back. The mist was freezing cold, the air thick with potent. Anna turned away as a weird fear gripped her. She practically ran back to the bar, weaving through the groups of patrons, and muttering, “Sorry,” as she knocked into one, splashed the drink from the glass of another, until she stood in front of Ethan.

His gaze mesmerized her. She wasn’t even sure she actually heard his voice, but somehow he soothed her.

“Anna, it’s time you went home now. You want to go home. You have work to do transcribing the interview with the band. Everything’s fine.”

She smiled at him. “I’m off now. Thank you for answering my questions. Thank Marcus for me. He left.” She gestured toward where she’d run from. A flutter of fear rose in her stomach and then Ethan was leaning forward, his blue eyes capturing her so that she dreamily froze to soak up his low voiced words.

About Elodie
I’m a writer who is in love with happy endings. Currently based in the UK but thinking about joining the next flock of birds I see heading south for the winter.
I love: music, art, flowers, trees, the ocean...
I work with antiques by day and words by night.
Like a vampire, darkness is my friend, that’s when the silence is only broken by an occasional hoot of owls in the woodlands opposite my current home, and I write.
Find me:
Blog Facebook FB2 Twitter Tsu Tumblr ManicReaders
Google + G+ Pinterest YouTube Amazon USA Amazon UK 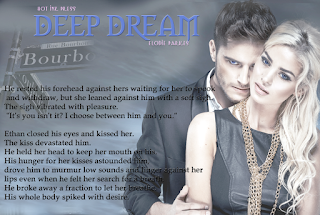