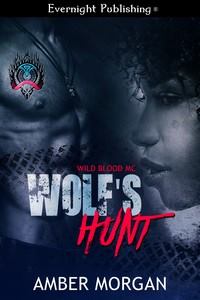 Thank you for having me!

Yes, this is book two in my Wild Blood MC series. Book one was Tanner's War (http://tinyurl.com/ztpns44). In that, I introduced my gang of bikers and the conflicts and loyalties that shape their lives. In Wolf's Hunt, I've hopefully given a deeper insight into the guys, as well as set up some future plots! I'm enjoying writing the books so much, and don't want to stop any time soon! The relationships (both between the men and their women, and between the MC members themselves) are really compelling to me, and hopefully will be to readers too.

Hmm, why not both? Interesting fact – Wolf's Hunt ended up being over twice as long as Tanner's War, which caught me off-guard! Fun fact – New Orleans, where the  bulk of the book is set, is my dream holiday destination. I would love to visit there one day, and it was very cool researching it for the book.

I'm a total pantser. I have a rough idea of how the characters and stories will develop, but I'm always surprised by something along the way! There are two side characters in particular in Wolf's Hunt who are now crying out for their own stories, and that was definitely not the plan!

I have plans for several more books in the Wild Blood series, and hope to start book 3 soon. I've also got a couple of short stories in the works unrelated to this series (one paranormal, one NA/contemporary). I also write urban fantasy under another name, so I always have a couple of projects on the go! The hard part is usually deciding which one to work on next...


Three years ago Wolf fled New Orleans, leaving heartache and violence in his wake. Now he's got one chance to win back the woman he left behind, Clea Allary. There's just one thing standing in his way—the deadly President of the Voodoo Kin MC, a man who will stop at nothing to finish Wolf and claim Clea for himself. Whether she likes it or not.

Clea's been staying one step ahead of the Voodoo Kin ever since Wolf broke her heart and disappeared. But it's getting harder to cope and there's no way out that she can see. When Wolf crashes back into her life, he offers her a dangerously tempting escape route. But how can she ever trust him again?

He didn't wait for her to change her mind. Lust and longing surged through him and he stood, pulling her up into his arms. She fell against him with a cry that ignited Wolf's fiercest feelings. He didn't just want to kiss her. He wanted her. Wanted to claim her, wanted to make it plain to everyone and anyone that Clea Allary was his, still, now, and always.
He took her mouth roughly, running his hands down her back to cup her ass and pull her in hard against him. She clutched at his t-shirt, grabbing handfuls of it as if it was the only thing holding her up, and she whimpered his name against his lips. It drove him wild. That little sound was like a jolt of adrenaline, and it traveled directly to his cock, hardening him almost to the point of pain.
Their kiss was hard, desperate, almost a battle of wills, as if Clea was eager to stamp her ownership on him too. She shoved her hands under his t-shirt, raked her nails down his back. Wolf hivered in pleasure and squeezed her ass in answer. She writhed against him, nibbling at his lips. The feel of her hands on his bare skin was too much for Wolf. He tried to push his hands down the back of her jeans, but they were skin-tight and he broke away from the kiss with a curse. Clea laughed at him.
"Giving up already?" Her eyes sparkled with amusement and desire.
Wolf brushed her hair back from her face, drinking in that look. His heart swelled and his entire body ached with need for her. He'd never thought he'd get that look from her again. "Never again. Not when it comes to you." He reinforced his words with another kiss, then gave her a gentle push, forcing her to sit back down on the bed.
Once again he knelt before her, hands gliding up and down her thighs as he studied her face. Her cheeks were flushed, her lips invitingly swollen from his kisses. Her breasts heaved under the t-shirt he'd given as she caught her breath. He didn't plan to let her recover so soon, but he wanted to be sure before he did anything else that she knew there was no turning back now.
"Tell me you want this," he said. "I can't walk out of here, do what I have to do, without taking a piece of you with me."
She licked her lips, a nervous gesture, and he wondered if she'd still do it if she knew it made him want to jump on her. For a second he thought she'd turn him away – and he would have gone, but damn, it would have been agony to do it. Then she smiled coyly...

Amber is the secret identity of a writer who normally pens urban fantasy, but feels like stretching her wings. Amber loves darker romance, anti-heroes, good red wine, and expensive chocolate (sometimes all at once). She's based in the UK and lives in an adorable cottage with her dream man and an adorable cat.