Shari Elder Stops by to Chat about Sci-Fi Romance....

­­Hello Shari!  Thank you so much for visiting Written Butterfly with me today!  It’s such a pleasure to chat with you.  So tell me… 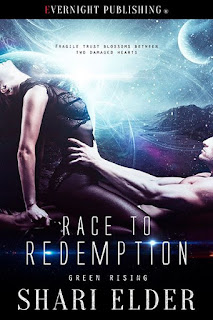 First, thanks so much for having me. I’m glad to be here. Race to Redemption is Book #1 of the science fiction romance series Green Rising. It is set in a world where corrupt corporations fund an equally corrupt intergalactic government. They all hoard resources, keeping the general populace poor and use 24/7 surveillance and a Cyborg Army to maintain control. Below the surface, a rebel coalition is emerging. I have seven romance novels planned, in which the opposition will take several steps forward, then get knocked back a few steps, until their alternative world finally takes hold. In this book, which gets it all started, our heroine, Elaina is very much part of the corporate world. Through her experience as a transport pilot for Erik, she discovers that there is another way to live.

Q) Can you give a fun or interesting fact about your book? And what gave you the inspiration for your book?

I am answering these together because a really fun fact is how this concept evolved. I wanted to write a story about heroes and heroines who had different careers. In the very first version, Elaina was a NASCAR driver, and Erik was a doctor on an outpost in North Africa, who ran a clinic as a cover story, but he was actually a special ops agent assigned to monitor bioterrorist activity.  As the idea developed, I found the issues so complicated, and the research so vague, that it morphed into a science fiction romance. In this way, I could play with the ideas with a greater degree of freedom.  Elaina became a storm racing pilot, and Erik a doctor-scientist monitoring biogenetic tampering.

I generally write at the same time every day, which is first thing in the morning and on the metro to work.  I think the persistence and regularity ‘trains’ the muse.  My life, like many of you, is hyper-busy, so by identifying a time and keeping it sacred to my writing, it keeps things moving along.

I just finished a draft of a paranormal novella entitled Unnatural Allies.  It picks up at the end of my previous Evernight Release, Shifter Trials. I am also about a quarter finished with the Scent of Memory, which is Green Rising Book #2. It will be a big win for the rebels.


Race to Redemption (Green Rising Book #1) is science fiction romance jam-packed with action, one panty-melting hero, sexy alien races, and a kickass heroine. In the story, a pilot and a doctor race across the desert to prevent a deadly plague while fighting the pull of their own hearts. 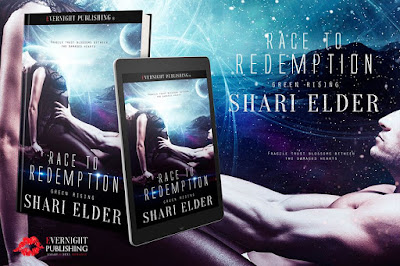 A woman who lost everything.
Intergalactic storm racing champion Elaina Carteret had it all – fame, wealth, men – until a horrific accident took it away. To get it back, she agrees to pose as Lainie Carter, medical transport pilot and corporate spy. Her risk-taking attitude infuriates Dr. Erik Johansen, who runs the outpost with an iron hand, a permanent scowl and the tightest bod on the planet.

A man desperate for redemption.
Unable to forgive himself for a past tragedy, Erik works himself into an early grave. He has no patience for the insubordinate Lainie Carter, who can’t take an order, disrupts routine and flames his body to ash.

A planet at risk.
When the outpost is attacked, they’re thrown together in a race across the desert to stop a deadly biogenetic weapon As a fragile trust blossoms between two damaged hearts, their pasts resurface and threaten their growing bond.

Hello, I'm Shari. By day, I crawl out of bed, mainline coffee, walk the dog, get my kid off to school, hop on the metro, and save cities within the four walls of my office. Usually by email.

At night, the other Shari emerges.  I take off the suit, curl up on the couch and let my imagination play, with words and images until stories take shape (while periodically checking on my teen-ager, hiding out in the bedroom and plotting world domination).  As my alter ego, I save cities in a cape and spangled tights, wander space and time on a surfboard, fly over the Himalayas on feathered wings, make six-toed footprints in indigo talc snow on the sixth planet in the Andromeda galaxy or eavesdrop on Olympian gods while pretending to whip up a bowl of ambrosia.

In all these wondrous worlds, romance and passion blossom. I can't resist a happy ending. And I am particularly prone to writing happy endings for those who have given up on ever getting one. That gives me immense satisfaction.

Join me on my journey. The best ideas emerge from team work.