Hello Faye!  Thank you so much for visiting Written Butterfly with me again!  It’s such a pleasure to chat with you.  So tell me… 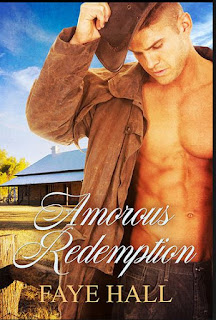 Phoebe Porter, the heroine of Amorous Redemption, is based on the stories I was told of my great grandmother.  Both women share the surname of Porter, but are also very strong women willing to defy society’s rules to survive.  Duncan MacAllester, the hero and bounty hunter sent in search of Phoebe, was a character that developed along the way.  I had originally thought to base him on my great grandfather but he ended up being an even stronger character, one willing to risk everything for the woman he loved.

An interesting fact about Amorous Redemption is the cattle station mentioned throughout – Inkerman Downs Station – was in fact owned and run by my great grandmother’s family.  There last name was Porter.  Until recently it still remained in the family.

I find music always helps get the ideas flowing and makes things easier to start writing.

I usually have a notepad with basic outline of characters in it – eye color, hair and so on.  There personalities for the most part though grow as the book does.

Every book I have written always has a few real life things in it.  Sometimes it’s just the names of some of the characters.  Other times its actual occupations of people from mine, or my husbands, family tree.

I have signed a contract for a book titled Heart of Stone.  I’m waiting for a cover and edits at the moment, but in short it tells the struggles of an Australian slave trader who falls in love with an Irish slave.

Phoebe Porter had run away from her family…from her fiancé…from her life.

Upon arriving in the dusty mining town of Ravenswood, Queensland, Australia, Phoebe was certain she was finally safe from all who wanted to rob her of everything she had…including her life.  That was until she felt herself being swept up in the strong arms of a stranger…a stranger she would soon be surrendering her body and heart too.

This was to be the last job for bounty hunter, Duncan MacAllester.  All he had to do was retrieve Phoebe Porter from Ravenswood and return her to her home of Inkerman Downs Station and to the fiancé awaiting her.  If he could survive this last hunt for this woman then he would finally have the money he needed to reclaim his cattle station and retrieve his life.
When Duncan pulled Phoebe safely from the midst of a bar brawl, never could he have imagined this would be the beginning of one of the most dangerous journeys he had ever made…or the most passionate.

Together Duncan and Phoebe must face not only the unforgiving humidity of the North Queensland outback, but also the men that were sent after them to kill them both.
When Phoebe is ripped from his grasp by the abusive hands of her fiancé, Duncan follows her back to her hometown knowing that he would do anything to protect this woman…even if it cost him his life.

EXCERPT
Duncan turned to her, obviously annoyed by her continued stubbornness.  “Damn it, Phoebe.  There are far worse men out there your family could send after you than me.”
“I don’t care,” she replied sternly.  “Either you keep me safe away from what awaits me at Inkerman Downs Station or I shall find a man who can.”
Phoebe stood firm watching as Duncan approached her, his steps measured.
“Have you any idea how dangerous it is for a woman such as yourself out here in the Australian bush?” Duncan asked her.  “We are miles away from civilization, and practically rubbing shoulders with creatures that either want to kill you or eat you.”
“I don’t care,” Phoebe said, her stubbornness continuing.  “I won’t go back there.”
“But why?” Duncan asked.  “I don’t understand your continued resistance.”
Phoebe felt her restraint crumbling under his continual questioning.  She wanted to appear only a figure of strength before this man, but Phoebe knew her fear would be her weakness.
“Have you any idea what it is like to live in fear each day not knowing what your family has planned for you?” Phoebe asked him, spitting the words at him like poison.  “Have you any idea what it is like being afraid of every man you meet, wondering if this is the man your family has sold you to?”
Phoebe took a steadying breath, feeling her tears threatening, knowing she had to reign back in some of her control.
“I won’t go back, Duncan...not to my family nor to Gordon.  I will not go back to be the wife of some monster to be beaten and raped and treated little better than the scum on the bottom of his boot!”
“But I don’t understand,” Duncan asked, his brow furrowed in confusion.  “If you were my fiancé-”
“But I am not your fiancé!” Phoebe yelled back at him.  “I am nothing more than your redemption!”
“My redemption?” Duncan asked.
Watching as Duncan’s face filled with clear annoyance at her choice of words, Phoebe began to wonder if she should have made that last remark about their relationship over the last few days.
“My redemption?” Duncan asked again.  “You think I’ve been sleeping with you for money?”
Feeling suddenly nervous at the stony cold tone in Duncan’s voice, Phoebe fidgeted with her fingers uncertainly.
“Why else would a man like you be so eager to crawl between my thighs?” Phoebe asked, her words far harsher than she had intended.
“Your family paid me to return you, sweetheart!” Duncan exclaimed in an angry tone unlike any she had heard before.  “They never paid me to sleep with you!”
Phoebe struggled to hold back her tears.  “My family would have paid you to do whatever you had to to get me to go back with you, Duncan...including seduce me.”
Phoebe wiped a tear away from her cheek in pure frustration that she should show such weakness in front of this man.
“You are no different to my fiancé,” Phoebe said angrily.  “I am nothing more to you than an exchange of goods for money.”
She couldn’t understand why but Duncan appeared pained upon hearing her words.
“Exchange of goods?” he asked, his words laced with more hurt then irritation now.  “You really think I was paid to seduce you?  You actually think I was paid to sleep with you...to take your purity?”
Phoebe nodded silently, not trusting herself to speak.
Walking up to her, Duncan stopped just inches from her, all harshness gone from his features.
“It was you who walked past me at the waterhole that day as naked as the day you were born.  When I went to you, you didn’t push me away, nor did you tell me to stop.  You welcomed me with open arms, Phoebe.”
Phoebe let out a steadying sigh, knowing what he said to be true.
“I had little choice.  I was scared of what you might to do me should I refuse you.”
Reaching his hand to behind her head, his fingers laced in her hair.  Pulling her to him, his lips embraced hers hard and painful.  Releasing her from his hold, Duncan took a single step back away from her.
“Your family was paying me extra to ensure I didn’t sleep with you, Phoebe.” Duncan spat the words at her.
With that Duncan turned away from her and walked back to the horse, swinging himself up into the saddle.