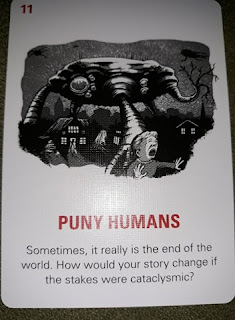 Recently I wrote an apocalyptic story that focused on biological warfare. Not the type to produce zombies, instead killing certain blood types. I targeted the blood type O, which would kill over 85% of the world's population. So to explore this world was interesting because I didn't know where my main character, Jo, would take me.

Every scenario and character must have flaws to be believable. Omnipotent power (eg: robots or gods) is boring as hell. Even magic must have limits. In one of my stories I had one rule for magic: "Only for the living and only in the now". Meaning, you couldn't bring the dead back to life, or time travel somewhere.

Sometimes, it really is the end of the world. How would your story change if the stakes were cataclysmic?

>A comet will smash into the Earth in 24 hours. What would your hero do?

> What if your hero was the invader? Consider the story if he was the conqueror rather than the conquered.

Looking at how your hero might respond to a major cataclysm- asteroid, plague, tsunami, robot uprising- can offer insights into her actions at a more human-level jeopardy. So start blowing things up. Knock down some national monuments. Smash, crash and see what you get.


What's import to your hero? Who would she save? Where would she go? And once there, would she lead the resistance, or keep her head down?


How would a cataclysm change your hero’s interaction with the antagonist? Would they still be on opposing sides? 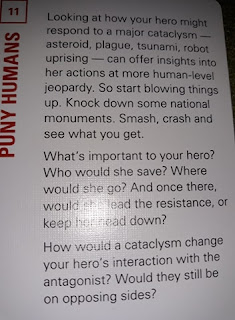