Hello!  Thank you so much for visiting Written Butterfly with me today!  It’s such a pleasure to chat with you.  So tell me… 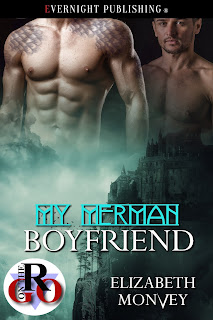 It is the 7th book in the My Boyfriend Is… series. I drew inspiration from Gothic Romances like Jane Eyre and the film Crimson Peak.

2)      Do you plan all your characters out before you start a story or do they develop as you write?


This book took a little bit of thought because there is a twist and I had to word it just right. I didn’t want to spoil anything with hints, so I definitely had to plan it out.

I don’t really have a ritual. I usually write on my couch as I have some mindless tv show on. I like noise because it forces me to focus on what I’m writing, thus preventing my brain from wandering off topic.

4)      What was your process for coming up with the title and character names?

The purpose of the My Boyfriend Is… series are taking short glimpse into a couple’s life and throwing in a bit of paranormal. All the couples in these books are committed to each other and the twist is having one partner find out there’s more to the world than what meets the eye. I have a list of characters for this series, so this time was about mermen. I once watched a “mockumentary” on mermaids and the thought stuck with me.

5)      Do you have anything you would like to say to your current readers or to those that haven't yet read your work(s)?

I am planning out a cyborg futuristic romance story set in the apocalypse. Hopefully I can do it justice.

BLURB
Rian wakes up in a hospital, unable to remember anything. Not even his boyfriend, Jarred.

He is whisked away to their castle, where secrets make him hesitant to trust all Jarred says. As he tries to uncover the secret of his injury, he stumbles across a hidden tunnel…and a vast treasure in lost shipwreck gold.

It isn’t until he follows Jarred down into the tunnel that he discovers his boyfriend is not completely human.

Jarred pulled out his cell phone and, with a few taps, brought up a classical piece of music. The haunting strings echoed in the room. He stood and held out his hand. With his heart beating quickly, Rian took hold and Jarred pulled him into his arms to sway in rhythm to the music.


“We danced like this the first night we made love,” Jarred whispered, resting his cheek against Rian’s head. “On the beach, in moonlight, with the gentle sound of the tide coming in as our opera.”


Rian closed his eyes and could picture the hypnotic moment that Jarred weaved. His blood heated, his cock hardening at the sensual sway between them. Jarred placed a small kiss against the sensitive skin behind his ear.


“I held you close, and our heartbeats pounded in sync,” Jarred continued. “I knew you were meant for me just as you knew I was meant for you.”


Jarred ran a hand down his back, until he reached Rian’s ass. Squeezing hard, bringing him in even closer. Their breaths mingled, desire chasing away any lingering doubts. All Rian wanted was to feel Jarred’s lips upon his. They melted into each other, with the first tentative kiss swiftly deepening. A memory drifted through Rian’s mind. He’d felt this before.


He’d tasted these lips before.


He tried to grasp the moment, tried to pull it out of the depths of blackness, but the more he concentrated on it, the faster it slipped away. With a groan of disappointment, he pulled back. Jarred’s eyes glowed with a spark of otherworldly passion that Rian couldn’t explain.


Jarred closed them and took a deep breath. When he opened them back up, the iridescent brilliance had gone. “Rian—”


Rian pulled away. “I remembered your kiss.”


Happiness lit up Jarred’s face. Rian held up a hand.


“I want my memory back before we proceed with anything,” he said. “I can’t sleep with you when you’re still a stranger to me.”


“But we’re not strangers,” Jarred whispered.


Rian thought about the kiss. “My body knows you’re not. My head is saying something different.”