My upcoming book, THE SCARLET DOVE, will be released Wednesday, April 25!  It is a MFM Western Historical: 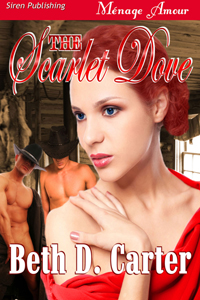 When Liza Trent decided to become a mail order bride out west, she never thought her fiancé would die before she arrived; sending her $500 in debt with the only way to pay off the money by auctioning off her virginity against her will.  When she's rescued by two handsome men, she mistakenly thinks they're assassins, and makes a pact with them: her body in unconditional surrender for their protection.

Only the two men, Apollo Beck and Blue Hawke, aren't assassins.  They're Rangers sent after a man who preys on women and their dangerous hunt has just brought Liza into the line of fire.
As they navigate a relationship built between three people, Liza has the difficult decision before her: commit to loving two men or commit to her burning desire to become a doctor…unless she's found and taken for revenge first.

***This is an interesting cover for me.  Liza isn't exactly how I wrote her to be.  In the story she has golden red hair, cornflower blue eyes and freckles everywhere.  I asked if the eyes could be changed and they agreed.  Still not the right color but at least they're blue!  Otherwise, I really love this cover! Her face has the right combination of unsure woman and steely resolve.  She's very mysterious, I think.  In the background, Apollo is the one taking his clothes off while Blue (Morgan) is simply waiting.  I love it!

Let me know what you think!  One winner will be chosen at random, will receive the free pdf ebook version on release day of April 25th!!  And make sure you check back on April 25th for the opportunity to win another free pdf ebook of your choice!