Welcome Jacey Holbrand!  Thank you so much for visiting Written Butterfly!  Congrats on your new release, The Encounter!  Can I say, your cover is super sexy??!! 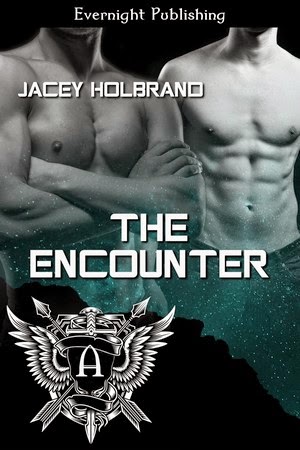 I’m so excited! My story The Encounter is now available!

The Encounter is the first book in a series I’ve started called: The Agency. An ‘advertisement’ for The Agency goes something like this: “Seen a ghost? Have issues with a poltergeist? Experienced a close encounter? If you’ve come across something odd and don’t know what your next step is, call The Agency. We’re here to help you regarding your supernatural needs.”

Cool, right? (: I’m currently at work on the next few stories in this series, but for now check out The Encounter available from Evernight Publishing.


A]  I originally wrote the story for an anthology call where an alpha boss was to be paired with an assistant. I figured a story in the anthology would be a good start for the series I’m writing and then ‘poof’ the characters were there in the forefront of my mind ready to be written.

A]  Going for a walk helps to clear my mind, get the blood and thoughts flowing, and give my muse a happy boost.

A]  As of answering this question, I’m waiting to hear on a submission for a steampunk series, I have more The Agency stories in the works and hope to get some shifter stories in another series going and out in an editor’s queue somewhere by the end of the year.

Blurb
The Agency, 1
Evan ‘Zen’ Zenas is the top agent at The Agency and is known for his brusque demeanor. He’s also known to be tough on trainees. Those who find themselves under his tutelage usually don’t last long. When he’s assigned a new assistant, Seth Trivos, Zen’s faced with questions about his past he’s not too keen on answering.
Seth Trivos knew Evan once upon a time, loved him even, but when Evan disappeared, he unknowingly broke Seth’s heart. Now, he’s in Evan’s world as the newest recruit at The Agency, and he’s looking for answers.
Will Zen chase away another new assistant because he doesn’t want to open up about a past encounter or will being forced on a case together make him face the demons he’s been trying to hide from?
Be Warned: m/m sex

Excerpt
Zen threw his arms around him in a tight hold and claimed his mouth with wild abandon. Seth’s head reeled. He couldn’t believe he and Zen were kissing. Granted, it wasn’t anything like the soft moments and slow love making he’d imagined over the years, but he’d take what he could get at the moment.
Zen moved his hands up and down Seth’s back. The heated touch under his jacket and over his shirt seared his skin in a delightful way. Zen’s lips pressed upon his almost too violently. He swept his tongue out, forcing Seth to open his mouth.
Seth adored the taste of him, salty and spicy, and his scent of leather and earth as well.
God, for so long he’d waited to have Zen in his arms, his body close. Zen’s lips trailed down his neck. Seth reached up and cupped the back of Zen’s head. Zen pulled at his shirt, tugging it from the confines of his pants without breaking the kiss. In the process of kissing him, somehow Zen was able to unbutton and unzip both their pants and free their cocks out of the openings.
Desire rushed through Seth, clawing at his insides. Zen clutched at him like a drowning man scrambling for purchase on any floating thing to save him from the watery depths. Hands traveled over his shoulders, up his shirt, feeling all the nuances of his chest and back down to his rock-hard cock. The man held their dicks against each other, and Seth sucked in a long stream of air. The feel of their two satiny lengths rubbing together was a heady sensation.
Zen turned their bodies and laid them down. He stretched over Seth. Seth loved feeling the weight and heat of Zen’s strong body atop his. Still, Zen continued to kiss him, and he continued to surrender to the demand of Zen’s mouth.

Author Bio
Jacey Holbrand believes love comes in all forms and should be celebrated. She’s committed to her muse and writing so she can share those kinds of stories with readers. Hot days. Sexy nights. Come play in her world.
Jacey loves to hear from readers! Click the link to eMail her: JaceyHolbrand@gmail.com