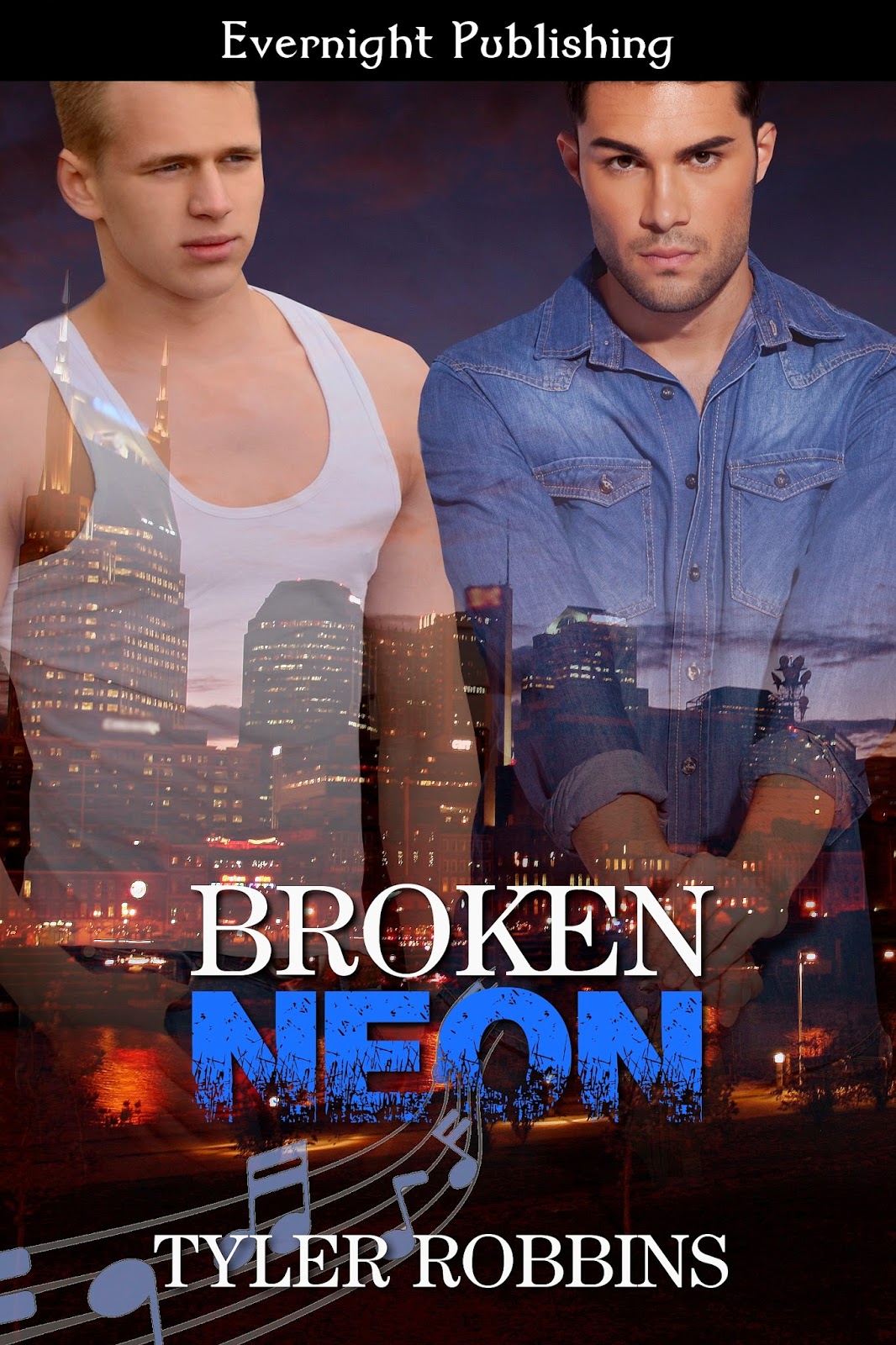 Hi Tyler!  Thank you so much for visiting Written Butterfly with me today! I'm so excited to hear about your new book "Broken Neon"!

I suppose, before answering that question, I should explain why I created the characters in the first place. As a fan of all music genres, and a lifelong Texan, country music has played a monumental role in my life. Country music is probably the most “stereotyped” genre in the industry. While depicting a love of Freedom, God and Country, perhaps it has inadvertently excluded or rejected a significant percentage of the population, whereas Pop and other music genres have embraced entertainers and fans from all walks of life much more openly, encouraging a tolerance of all people regardless of age, sex, race, creed or sexual orientation.The time has come for the acceptance of entertainers who reflect a true representation of all types of people, not just those who fit a certain mold. Each of my heroes are down to earth, “good ol’ country boys” with a strong sense of family and respectable convictions, much like the selection of people country music claims to cater to. However, what sets them apart is that these particular gentlemen just so happen to love each other rather than some sweet, southern belle. And that should be represented as well.

One thing I often require is silence. No distractions, no music, no TV, and no interruptions unless there’s an emergency. One bad habit I have, which is probably the unhealthiest, is snacking (especially when the writing is flowing best) and not getting enough exercise. My thighs and gluteus maximums are all the proof anyone needs that writing can be hazardous to your health. J

Currently, I am adding M/M novellas to my self-published series, the Blue Haven Boys while working on full length M/M novels to submit for publishing consideration. One huge project is my first ever MMF paranormal ménage. I am very excited and look forward to seeing how it all turns out.

Blurb:
Country music singer, Zane Alexander has struggled to keep his sexuality a secret, but hiding his attraction to their new guitarist, Finn Presswood, is damn near impossible. On the run from a dangerous ex-lover, Finn has secrets of his own, but his feelings for Zane isn’t one of them.

When the new song they co-wrote leads to a recording contract with a major Nashville label, it becomes clear that their lives are about to change. Unfortunately, secrets are harder to hide in the limelight, so Zane fake-dating a famous supermodel whose career is on the line as well, seems like the best solution for everyone.

Their dreams are finally within their grasp until Finn’s past catches up, and no matter how much the two men love each other, happiness is never guaranteed.
If good intentions pave the road to hell, then broken neon paves the road to Nashville.

Excerpt:
As he crossed the threshold, he tossed his hat onto the table and made a beeline to the mini-fridge. The door closed behind them, but Zane paid it little mind as he bent down to retrieve two cold beers. When he turned around, his heart skipped a beat.
Finn stood directly behind him, his shirt already unbuttoned and his jaw flexed taut. The hungry look in Finn’s eyes made Zane’s cock swell.
“Shit.” Zane let the bottles of beer fall to the floor as Finn moved in.
Their teeth clanked together from the voracious kiss, igniting the explosive passion that had been building between them. Tongues tangled, battling for domination, while clothes and boots flew about the room.
“I’ve wanted this…” Finn panted. “So fucking long.”
“Shut the hell up.” Zane shoved Finn back onto the bed and crawled up the length of him.
Zane felt Finn’s hardened cock jam into his side, and he reached down to stroke it without hesitation.
Finn pushed Zane’s hand away and flipped him over, then glared down into his eyes. “You better make this last.” Finn’s gravelly tone only added to the need pulsing through Zane’s cock.
He kissed Finn’s shoulder and chest as he dug his nails into Finn’s back.
Finn winced and kissed Zane even harder, rocking his groin against Zane’s thigh. Pre-cum seeped from Finn’s thick shaft, dampening Zane’s skin. He swallowed hard, wanting nothing more than to lick the crown clean. He gripped Finn’s cock, and stroked it, causing Finn to bite down on Zane’s bottom lip as they kissed.
Zane reciprocated by sucking Finn’s lip into his mouth, while his mind ventured to thoughts of what he’d rather be sucking. The desire surprised Zane a little. Usually, he was the one being pleasured, but this was different. Zane wanted to get Finn off so badly, he could taste it.
He pushed up on Finn’s shoulders and kissed his way down his chest.
Finn rolled off and lay on his back. He ran his fingers through Zane’s hair and moaned as Zane moved lower. The sound excited Zane even more. His own cock ached. His need for release intensified with each blood-surging pulse.
Zane gripped Finn’s shaft firmly then wrapped his tongue around the crown.
Finn shuddered.
Salty sweetness coated Zane’s taste-buds. He tongue fucked the slit, searching for every drop Finn had to offer.
“Feels so fucking good.” Finn writhed and pulled Zane’s hair.
Zane swallowed Finn’s shaft. His eyes and mouth watered as each bob of his head plunged deeper. He flattened his tongue along Finn’s cock and lapped his satiny flesh like an ice cream cone.
Finn groaned and grabbed Zane’s arm, tugging him upward until they were chest to chest once again. He peered down into Finn’s eyes as they hugged each other close. Zane had missed this feeling. This connection.
This sense of giving himself to someone. He hadn’t shared this kind of mutual intimacy since before he started singing professionally, and even that was nothing more than teenage infatuation.
Finn’s eyelids lowered to half-mast. “Don’t stop.”
The urgency in Finn’s tone fueled Zane’s resolve. He’d take his new lover all the way to the other side. Past the point of no return. All of Zane’s previous doubts faded fast. “Once I have you, I might not want to let you go.”
He’d tried so hard to deny himself this pleasure. Kept it hidden, only allowing a few stolen moments with someone he’d paid to deliver, but none of that compared to letting his guard down and really indulging.
“We’ll cross that bridge when we get there.”
Zane leaned in and kissed him tenderly, savoring the feel of Finn’s lips pressed to his. The taste of his tongue and the warmth of his body fused to his own. This was exactly what Zane had wanted for so long.
If Zane were ever able to offer a man everything, Finn Presswood could damn sure be the man he’d give it to.

Robin Badillo and her pseudonym, Tyler Robbins, is a down to earth mother of four, born and raised in a small Texas town where she still resides with her nearly grown kids and a pack of spoiled dogs.
A fan of paranormal and southern romance novels, Robin does her best to offer up a plethora of tasty morsels to satisfy her reader’s appetite. Whether mainstream and/or paranormal erotic romance or Tyler’s LGBT romance line, Robin strives to create characters who are endearing and relatable.
Adversity is Robin’s motivation, which explains why she’s a true believer that grey hair is simply God’s graffiti.