Q & A with Jorja Lovett! 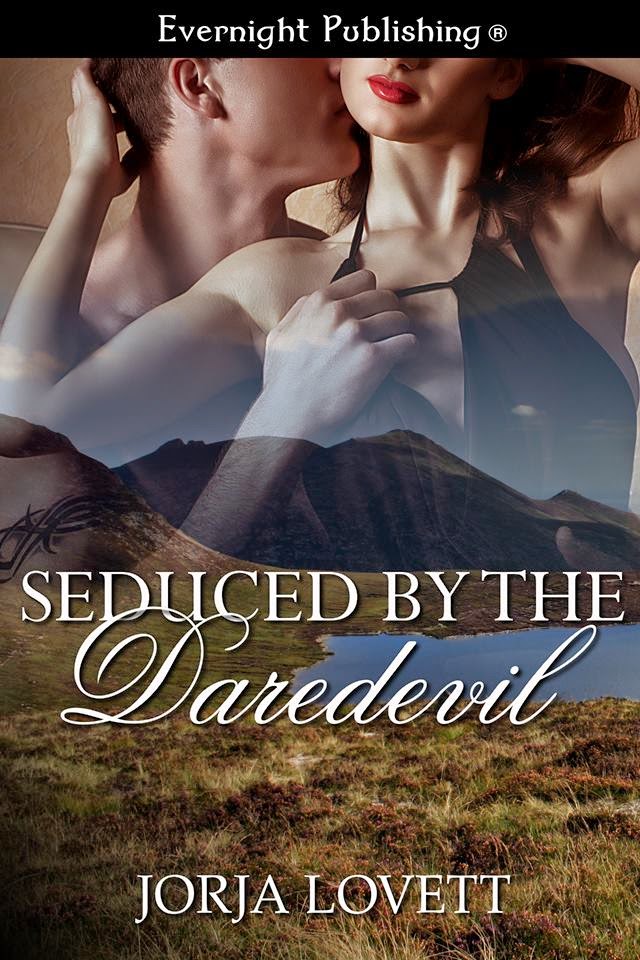 Hello Jorja!  Thank you so much for visiting Written Butterfly with me today!

Thanks for having me!

A) Andie came to me first, all buttoned up and seemingly incapable of having fun. I think there are elements of me in her. She's very misunderstood and beneath her tough shell she's a sweetheart. Of course, she needed someone to spar with, and who better than a hunk who lives life on the edge? Matt is full of mystery and it takes one determined lady to unravel the secrets which motivate his adrenaline-filled lifestyle.

A) I make sure I'm in my comfy clothes – yoga pants and sweatshirt - before I settle down to write. I have four important writing tools: notebook, pen, tea, and chocolate. And a quiet room away from two teenage boys is a must!

Seduced by the Daredevil – Jorja Lovett
Thanks for hosting me today, and sharing in the release new madness! Seduced by the Daredevil is available now and is a bit of a departure from my usual style. It started life as a medical romance, but there are definitely moments of rom com in there, as you can see from the excerpt…
Blurb
Sparks fly when 'Miss Stuffy Knickers' Andrea Bolan meets her match in daredevil Matt King. There's nothing quite like a passionate kiss to motivate a girl to jump off a building in the name of charity. With her inhibitions left far behind she begins to see the benefits of no-strings fun and sets her sights on her sexy abseiling instructor, but things don't go exactly to plan.

Adrenaline junkie Matt fights his demons by living his life on the edge and an uptight dietitian definitely isn't his usual type. But, when they're thrown together at work there's no denying the chemistry. Lust is easy for him to deal with, but he doesn't do commitment.

A sizzling affair catches them both by surprise but if they're not careful their pasts might just cost them any chance of future happiness.

Excerpt
Matt was eternally grateful he had bought the apartment close by, overlooking the River Lagan. He had enough trouble keeping his hands off Andrea for the duration of the five-minute journey. Small talk with a driver in no obvious hurry was the last thing he wanted, with seduction on his mind. He held it together until they pulled up outside the apartment block.

"Cheers, mate." He threw a few notes through the window and pulled a giggling Andrea from the passenger seat.

Lust fuelled their journey and they half-ran to the entrance of the exclusive new complex. The few steps leading to his front door were taken in such a frenzied rush to reach their destination that Andrea stumbled on those impossibly high heels.

"Are you okay?" On autopilot, he knelt down to her crumpled position on the step and carefully removed her shoe to check for any swelling.

"I'm fine." She giggled again and held up the broken heel of her shoe.

"Thank goodness that's the only casualty," he said, and swept her, and the broken stiletto, up into his arms to carry her the rest of the way. With one hand fiddling with the lock and the other cradling Andrea close to him, who said men couldn't multitask?

Once inside, he set her back onto her feet and closed the door shut with the force of his body pinning hers against it. He wanted her naked, and that damn sweater which had teased him all day needed to go. Andrea didn't resist when he lifted it to reveal the bounty beneath, but tugged at his T-shirt in response until pressing his naked skin to hers became as necessary as breathing. He impatiently hiked her top higher to strip her completely of it.

"Hold on a sec." Andrea's muffled voice came from the tangle of blue wool wedged around her head. He yanked until her head popped free, leaving that once-silky hair a veritable bird's nest.

He broke contact to get rid of the barrier, and those few seconds let him drink in the sight of her. In a white bra and jeans, hair mussed, and lips swollen from his tending, she was a far cry from the priss-miss he'd first encountered.

Man, what a turn-on.

The rapid rise and fall of her chest mesmerized him, but restrictive cotton denied him the full effect of her voluptuous cleavage. Eager to free her from all conservative binds, his fingers sought to unhook the fastening of her bra. A well-rehearsed tug and flick failed to open the catch, and he distracted her with a passionate kiss while he worked on it. First with one hand, then with two, he pushed and pulled to no avail.

Finally, he had to admit defeat. "I can't get this bloody thing open, Andie."

Resisting the urge to rip it off, Matt waited while she reached to undo it herself. She whipped her underwear off to release her pert breasts into view, and slung it in his direction. The bra catapulted directly into his face, the tail end popping him in the eye. Instinctively he clutched his eye and stifled a verbal wince.

"I'm sorry. I'm so sorry." Through a watery haze, he saw her hand fly to her mouth in horror.

"Don't worry, Andie. It's not your fault." He tried to blink back the watery sting to ease her guilt, but full apology mode had already kicked in.

"That was a stupid thing to do. I don't know what I was thinking."

His one good eye saw her bend to retrieve the makeshift weapon. She stood up and accidentally head-butted him between the legs, his groin suffering the next hit. His tongue nearly didn't make it either, he bit it so hard to stop from crying out. The crippling agony doubled him in two and he fought to breathe through it. When, oh when, had his tried and tested methods of seduction turned into a comedy of errors?

"Why don't we take this somewhere safer? Like the bedroom?" he asked in shallow bursts amid ragged breaths.

Andrea placed a self-conscious arm across her chest and limped to his bedroom, one foot shoeless and the other wobbling on a stiletto. He followed when the ache down below receded enough to allow movement.