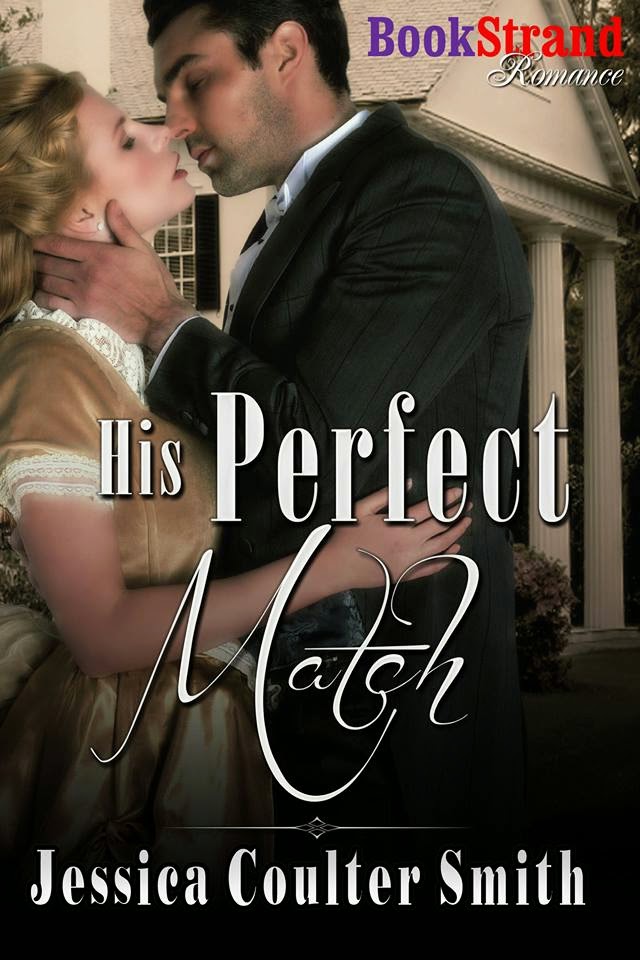 Hello Jessica!  Thank you so much for visiting Written Butterfly with me today! What a beautiful cover!

Kate’s character is based a little off me, actually. In the story, she’s so blind that she can barely see, to the point that glasses wouldn’t have helped her any. My vision, without my glasses, is exactly the same as Kate’s. Unless someone practically sticks their nose to mine, I can’t see their facial features if I’m not wearing my glasses. So I just imagined what it would be like to be in the 1890’s without a pair of glasses, left alone in a male dominated world where a woman’s only option was marriage.

Alec’s character kind of grew as the story progressed. I didn’t know much about him when I started out, other than he was an English lord visiting America with his family. I knew I needed to put him in a difficult position, between choosing his duty or choosing love, but the details didn’t really fall into place until I started writing.

I brew a pot of coffee, figure out which song (or songs) are speaking to me and loop them, then settle into my favorite corner of the sofa with my laptop. Usually Binx, my cat, is either sleeping on my chest (which makes typing interesting) or he’s stretched out beside me with his head in my lap. If I can’t find a song that’s talking to me, I’ll put on a romantic comedy to listen to in the background while I write. Although, I’ve found the TV to be rather distracting so I try not to do that too often.

Bits and pieces of either myself or the people around me, certain character traits mostly, find their way into my characters. Sometimes, I’ll overhear a story that’s hilarious or gets me thinking and it sparks an idea for a story, but so far none of my stories have been based off real life events. Just the people in my life.


Kate Witten has never believed in love at first sight, or in Kate’s case, love at first touch. But from the moment they touch, Kate Witten knows there's no other man for her than Alec Westbrooke, Earl of Lynox. How can she help but succumb to moment's passion when faced with such a man? But there are consequences for their one night of bliss, and Kate is determined to handle things on her own. When she disappears from Charlotte, NC, Alec tears the city apart, searching for the only woman to ever hold his heart. When he finds her, he finds more than he bargained for. Will his responsibilities to his family weigh heavy on him? Or will he give everything up for the woman he loves?


“I wanted you to myself for a while,” he said.
“Alec, I… I can’t imagine why you would want to spend time with me. There’s nothing special about me.”
He urged her to sit and then sat beside her. “I beg to differ. The moment I saw you, I knew you were special. Can’t you feel it? There’s something between us.”
“Please don’t say things like that.”
“Why not?”
“Because… you’re a lord and I’m…”
“My being a lord has nothing to do with this,” he interrupted. “There’s an attraction between us. You can’t deny it.”
“No,” she said softly. “I can’t deny it.”
He reached out and caressed her cheek. “How close does someone have to be before you can see them?”
Her lips tipped up in a smile. “Our noses would practically have to touch before I could see you clearly and, even then, I couldn’t make out as much detail as most people.”
He slowly moved closer, giving her time to pull away, but she didn’t want to. She knew that she should, but she found that she was fascinated by him. He came closer, close enough that she felt the warmth of his breath on her skin. Small details came into focus. She noticed his eyes were blue, laugh lines crinkling the corners. Lines bracketed his mouth, telling her that he smiled frequently. His lips were full and she wondered what they would feel like pressed against hers. A blush heated her cheeks as she stared into his eyes.
“You’re so beautiful,” he murmured.
“No, I’m not. I’m plain, ordinary.”
His thumb smoothed over her cheekbone. “Darling, you could never be plain.”
“Alec…” Before she could finish her sentence, he kissed her, his lips gently pressing against hers. It was the first time she’d ever been kissed, and it was everything she’d ever dreamed of. Her heart was racing as she slid her palms over his chest. Even through his shirt and jacket, she could feel his heart beating, nearly as fast as hers.
He placed his other hand at her waist and pulled her closer. Their bodies pressed together, she’d never felt so close to someone before. His lips moved softly against hers and she responded. It felt strange and yet so very right. Her body was warming from the inside out. She didn’t understand what she was feeling, but she wasn’t ready to stop kissing Alec.
“What is going on?” a voice demanded from the doorway.
She gasped and tried to pull away, but Alec held her tight.
“Nothing for you to concern yourself with, Charles,” Alec responded.
“Damn it, Alec. We talked about this.”
Alec kissed her forehead and rose. He walked across the room and faced his brother. “No, brother. You talked about this. I listened, but it doesn’t mean I agree with it. I’ll not marry someone just to line my pockets.”
So that was it, then. He had to marry for money. She had a decent monthly stipend, and her parents had set aside a small dowry for her, but it wouldn’t be near enough for a man who needed money. She’d known from the start not to look at any of Charles’s brothers, but she had hoped—the moment Alec’s lips had touched hers, she’d hoped that maybe things could work between them. But now it seemed that wasn’t to be.
She stood on shaky legs and walked toward them. “Please, don’t fight. Not over me. It… it won’t happen again, Charles. I’m sorry.”
Charles placed a hand on her shoulder. “You have nothing to be sorry for. I blame my brother, not you. He needs to find a wife with a hefty dowry, and well he knows it, and yet I find him toying with you.”
“I wasn’t toying with her!”
Kate slipped past them as they began to argue again. Hurrying down the hall, she escaped out the side door into the garden. Once outside, she breathed deeply, taking in the scents of roses, jasmine, and lilacs. The air was cleansing and made her feel a little better. Her senses were still reeling from the kiss she’d shared with Alec, but her thoughts were clouded by the argument he’d had with Charles. If he truly needed someone wealthy for a wife, then that left her out, no matter how magical their kiss might have been.
If she didn’t know better, she’d say that she was already falling for Alec, but that was ridiculous. They’d just met! But hadn’t that been how her parents had fallen in love? Her mother had once told her that she’d known the moment she saw Kate’s father that they were meant to be together. Kate didn’t have the benefit of sight, but she’d known from that first touch that there was something special about Alec.
She sat on a stone bench near a flowering bush and tilted her face toward the sun.


AUTHOR BIO
What happens when you get two artist romantics together? An impulsive marriage proprosal – and a woman who says yes (on the first date)!  While Jessica’s husband may not have intended for the words “marry me” to pop out on their first date, she surprised him even more by saying yes! That was over 14 years ago and they’re hoping for many more years together.

Jessica Coulter Smith began writing at an early age, but it wasn’t until 2008 that someone convinced her to have one of her stories published. When she received her acceptance letter in August 2008, it set her on an incredible journey, one she hopes will never end. In 2010, she decided to stay home with the kids and write full-time. It’s a decision she hasn’t regretted, and one that will hopefully result in many more stories to come.

Jessica loves to interact with her readers on Facebook and Twitter! But if you send her a friend request, be prepared for cute kitty pictures and kids getting into mischief, as well as updates on her writing.
Visit her website: http://www.jessicacoultersmith.com
Email her: jessicacoultersmith@yahoo.com