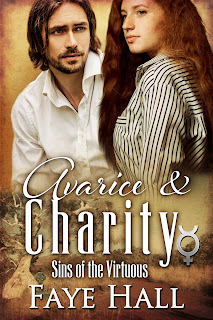 
Charity was not a hard character to create as I needed her to represent the true meaning of her name.  Avarice on the other hand was difficult as there is a fine line between gluttony – which the second book in the series – and greed.  Originally I thought I needed to make him be a greed driven man, changed by the love of a charitable woman but no matter what I did, he just wasn’t an appealing hero.  Eventually Avarice became a man who despised the greed driven man he was raised by instead, a character I felt was much easier to fall in love with.


Yes, Avarice & Charity is book number 3 in the Sins of the Virtuous series. The series itself explores the sins we are all tempted by and the virtues we aspire to portray.  Book 3 shows the sin of greed and how the person possessed by it will go to whatever lengths to satisfy it, including destroy the innocence of a charitable heart.


I don’t usually plan them too much, but for this book series I have had to so I could be sure they all represented either a sin or a virtue.  That sai, they do tend to change from my original plan as the story grows.


I’ve just been offered a contract for book 4 in the series, so I’ll be working on edits for that soon.  In the meantime I’m hoping to get back to finishing the rest of the series.


A small smile spread across her lips. “Yet you agreed to meet me here, and I assure you I don’t owe your father money. Nor did I have business on my mind when I made my invitation to you.”


Again silence fell between them, their hands still joined. Charity hadn’t lied. She hadn’t come here to meet Avarice for any form of business. She genuinely wanted to see him again. For a reason that was unclear to her, she found him intriguing, and she craved to know more about him.


“Where did you get your necklace?” he asked her, suddenly breaking their mutual silence.


Pulling her hand away from his, her fingers went to the metal pendant hanging from the chain around her neck.


“My father told me it once belonged to my mother. She died when I was still a young child. I’ve worn it ever since.”


Avarice sipped his brandy. “I feel your loss,” he commented quietly. “I was also a child when I lost my mother.”


Watching the pain filling his face, Charity wondered what could have taken his mother away that still caused him so much pain to this day.


“Did your father tell you anything about the meaning of the pendant?” he asked, changing the topic of conversation back away from their family members.


She shook her head. “I assumed it was Irish, but I know nothing else about it.”


His finger traced the rim of his cup momentarily before he lifted his sight back up to her. “It was called a triskele by the ancient Celts. It was very important to them and seen in many of their carvings. Of the things it can represent, the most significant is that the three spirals joined symbolizes the joining of life, death, and rebirth.”


Sipping her sherry, she placed the glass back on the table. “How does the son of an Italian immigrant know so much about Irish legends?”


He smiled at her. “I guess it does seem a little bizarre.” Suddenly, the smile disappeared from his face. “My mother was Irish. My father never speaks about her, and I have few memories of her. All I really know is what the townspeople have told me. When I was still at school, I figured out that if I couldn’t know who my mother was, at least I could study her people.”


She reached across the table and laid her hand on top of his. She could relate to Avarice’s pain, for she too never learned much about her mother, nor would her father speak of her.


Catching sight of her driver trying to get her attention through the crowd, she quickly retracted her hand and pushed her chair out to stand. “I do apologize, but it appears I must return home now.”


Avarice stood too, reaching out and taking her hand in his. “Do you no longer want to be seen with me?” he asked, clearly confused by her actions. “Have you perhaps again caught sight of your intended?”


She giggled. “I’ve caught sight of my driver, and nothing more. He’s telling me it’s time I return home before my father notices I’m gone.”


Seeing his embarrassment, she laced her fingers with his.


“You’re the only man I’ve wanted to see,” she tried to reassure him. “And if I had a choice, I would much rather spend the rest of this night with you.”


He walked with her toward her waiting driver and carriage, no sign of wanting to break their joined hands.


“I’ve never spent an entire night with a woman,” he confessed as they walked. “Nor have I ached to as I do now.”


She squeezed his hand, not knowing what to say to his confession. Having heard the slight uncertainty in his voice, she doubted he gave this same admission to many others. That he’d given it to her, filled her with elation.


Stopping by the carriage, she turned to face him. He looked so handsome in the moonlight. She didn’t want to leave him, but she knew she had to. Pulling her hand away from his, she stepped back.


“Thank you for the drink, Avarice,” she said politely.


She lingered for a moment, her gaze joined to his, her emotions yearning for something more than a simple goodbye from him. Closing the distance between them again, her hands went to his shoulders as she leaned into him, her lips touching his. Feeling his hands on her back, pushing her against him, she knew she had to leave now before she accepted any advances he made.


Breaking their embrace, she stepped back and walked over to the open door of the carriage. “Goodnight,” she said softly as she stepped inside her transport.

Would you protect the one you love from relentless greed?
Avarice Licciardi worked for his father, Antonio - a greedy, loveless man who destroyed everyone in his way.  When Avarice met Charity, a woman with fiery red hair and the touch of an angel, he discovered there was something he craved so much more than his father’s money.  What he wanted was this woman.
When Antonio ordered his son to get the hidden papers in Charity’s estate, Avarice refused.  That was until Antonio threatened to go get the papers himself.  Knowing the brutality of his father, Avarice went to Charity’s estate, ready to protect her at all cost.  When she invited him to stay with her, he hoped to find nights of endless passion.  What he found was a hidden tunnel with incriminating mysteries far greater than hidden papers.
Charity Bohdan lived up to her name, giving her herbal medicinal treatments freely.  What started off as patching up wounds soon took a very different direction when she was being called to treat young women who’d been brutally raped and left pregnant.  She knew the risks involved with treating and re-homing these women, but until she could find the monster attacking them, she could see no other choice.
When Charity was called to treat a drunk’s wounded hand, she expected to find some elderly station hand.  Who she met was Avarice.  As she treated his wound, she couldn’t ignore just how handsome he was, or the feelings he stirred in her when their skin touched.  The more time they spent together, talking of Irish legends and going on picnics, Charity could feel herself losing her heart to him.
Together Avarice and Charity are forced to uncover secrets from the past that sicken their souls as an evil, greedy man threatens to tear them apart in his search for the evidence hidden in the Bohdan estate. 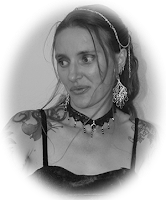 Come on a journey with me through 19th century North Queensland, Australia and explore the passions and hardships of unique characters.

There is corruption, deceit and murder, as well as cattle rustlers, slave traders and hell fire clubs. Explore townships of Jarvisfield and Inkerman, as well as Ravenswood and Bowen. One book even incorporates my great grandmothers cattle station 'Inkerman Downs Station'.