Bethcapeds- A Bug in the Ear is Worth.... 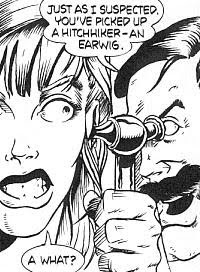 Ever wonder what it feels like to have a bug inside your ear, burrowing its way toward your eardrum? No? Me neither. Until this morning, that is. I was awoken around 430ish by a sharp pain inside my ear and what sounded like “swishing”. I felt something odd fluttering around inside so I woke Brian up and had him look in my ear.

Nada, he said. He saw nothing, and being still somewhat asleep, he quickly dismissed me and went back to . I sat on the couch with several Q-tips trying to dig whatever it was that was nesting in my ear out. To no avail, I must admit, though I was secretly hoping that I was completely bonkers in thinking that a bug had crawled inside my ear while I lay peacefully sleeping.

After flipping through absolutely nothing on the television, the squelching in my ear stopped as did the pain, so I decided I needed to get some more sleep. Because I just had to have imagined it, right???? I grabbed my pillow and warm blanket from the bedroom and settled down on the couch. Immediately, pain shot through my ear as well as the crawly sensation of something alive deep in my ear. (Again with the ew, yuck and gross)

And when I say pain, imagine someone with a large needle or pin playing VooDoo Doll with your eardrum. That’s when I woke Brian (again) and told him I was going to the ER. So after driving with my head titled to the side (like, did I think the bug would fall out via gravity?) I arrived at in . The one good thing about visiting the ER at on a Saturday morning is that you can find parking in front and there’s no wait! Of course, after I’m admitted and sitting in a triage room with a gown on does the damn bug decide to go toward the light (in this case, out of the ear canal) where I felt it wiggling it’s way up. I scooped him out with my nail just as the Doctor walked in. Great. He looked in my ear and said that there’s still a wing left behind.

Really? A wing? I had an insect wing in my ear! Ew. Yuck. Gross. A hundred bucks later I walk out of the ER, sans pain and creepy crawly things, thank goodness, but I decided to keep it. I should have the damn thing dipped in gold. The Good Doc said I did the right thing and that I was lucky…he’d seen stuff like full grown roaches in people’s ears. W…T…F? How do you not feel a huge roach going into your ear????

Now, I need a nap but paranoia is now my copilot. Damn bugs.