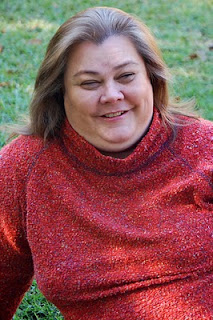 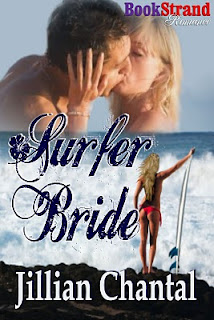 First, I want to thank Beth for having me here today. I read her blog a lot and am privileged to be part of it today. Let's have some fun and a give away.

My second book published with Book Strand Publishers is called Surfer Bride and was released on February 22, 2011. The name comes from one of the lines in the book. My heroine's a professional surfer. She's the world champion long board surfer caught up in a scandal. She picks up a newspaper one day and reads the headline- it refers to her as Surfer Bride and she immediately says, "What an awful title." So, I couldn't resist using it for the title of the book.

Speaking of the book and inspiration for the title reminds me of my inspiration for the hero, Finn. I'm a member of the Gulf Coast Chapter of the Romance Writer's of America. At the first meeting I ever attended, the fabulous Cynthia Eden bebopped over to my table and introduced herself to me. She and I hit it off immediately and became friends. She's a doll and such a fun person. One day last summer, we were talking about Mark Strong. He's an actor that usually plays villains or anti-heroes. We were talking about how hot and sexy we thought he was and bemoaning the fact that he was always the bad guy (he's so good at it). I said, "Someone needs to write a story where he's the hero." Cynthia looked at me and said, "You do it." So, I did. He's definitely the inspiration for the hero in this book. One error that almost got through the editing process was that I initially described him as brown eyed as Mark is in real life. Later in the book, I decided that green would be better due to something the heroine says. Neither I nor my editor caught it the first set of edits. The night after I sent in the first edits, at 3 am, I woke up in a panic- checked the manuscript, and sure enough, big boo-boo. I fixed it and went back to bed. I love the way the subconscious works but that's another blog post for another day.

Check out Mark Strong's filmography at http://www.imdb.com and check out his pictures. He's one fine man! Now, mind you, the hero of my book has hair, but Mark is sexy with or without the hair.

The book can be ordered here: http://www.bookstrand.com/jillian-chantal
To watch the book trailer http://www.youtube.com/watch?v=BVPI7QrsF0A

I'd like to give away a Live, Love, Surf magnet to one commenter- For a chance to win, leave me a comment on which bad boy actor you'd like to see become a hero. I'll have random.org pick a winner tomorrow at noon.
You can find me here: http://www.jillianchantal.wordpress.com and email me here: JillianChantal@gmail.com or tweet me http://twitter.com/JillianChantal
Posted by Beth D. Carter at 6:15 PM