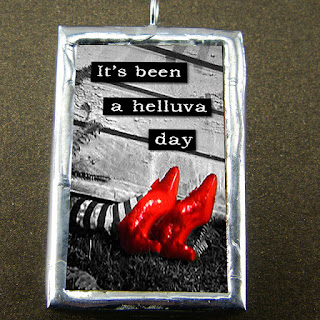 Let me give you a mental picture of how my son’s school is laid out.  It’s a small community elementary school nestled amid a nice development of older single homes.  Several streets are one way and so narrow that if a car is parked the least bit sideways then it makes it extremely difficult to drive down it.  So this morning, I turn down the street and get to this large delivery truck parked as far to the side as it can get and another car parked smack-dab in the center of the road, effectively blocking it.  And the car is turned off.  So I honk my horn.  Nothing.  I honk my horn again and this man saunters from in front of the delivery truck yelling “Stop honking lady.  It’s not gonna make me move my car any faster”.  And he proceeds to take his own sweet time to start and go.

About five minutes later I think about what I should have said: “Well, since you’re so near a school why don’t I call the officer that’s on patrol over and tell him what a disturbance you’re creating?”

Why do I always think of what to say minutes too late? 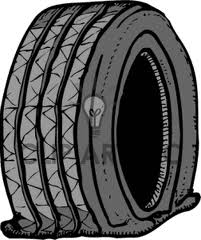 Afterwards I went to visit my mom in the convalescent home.  As I was coming home, I hit something large and heavy on the ramp driving onto the 405.  Immediately, my low tire pressure light came on.  CRAP!!  If there hadn’t been a major accident on the 405, I might have made it back before my tire totally deflated…unfortunately, I only made it to a little past LAX.  Now, for those of you who don’t know or can’t visualize the 405, think about having a sprained ankle and having to run across the Indy 500….with all cars racing.  Not fun!!!

Called Brian and he raced over, helped me put on the spare.  My tire was FLAT.  Flatter than Keira Knightly’s chest. (See below)  Hurried to pick up Hadrian.  Then raced to the tire place only to be told they don’t have my tire in, they have to order it.  They put on a temporary tire so I don’t have to drive around on a spare and I go back tomorrow AM to get my tire. 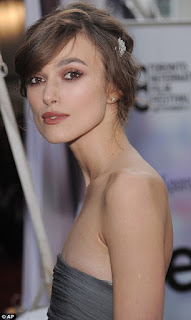 Then I have to go to Ralph’s and pick up groceries and some prescriptions.  In the check out line, this old white-haired woman behind me (who crowds me) says snidely “That’s a lot of soda”.  Bitch, what???  I bought two 8 pk of the small size Pepsi bottles, you the ones you drink in two gulps?  Why the fuck do you care how much soda I buy???  Yes, I give my kid soda and candy. And sometimes I throw in a cookie or two.  Deal with it.

Exactly seven minutes after that woman is when I thought of a good response.  “Well, seeing that you’re older than dirt, it’s probably too late to learn the concepts of personal space and none of your fucking business.”

I am home and I’m not going anywhere for the rest of the evening!  I’ve stocked up on steaks and mojitos…now I’m set.
Posted by Beth D. Carter at 4:46 PM