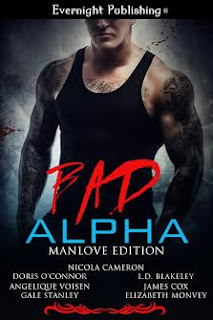 I love tying my stories together, so this book will tie into the last book of my Divergent Species series.

Most of my stories are completely from imagination.

Dekker ran away from his pack in an order to protect his lover and Alpha, Grey, when he overheard two higher ranked wolves talk about killing him.  When Grey finds him six months later, Dekker tries to convince the man he loves to go away.  But Grey won’t take no and as the two talk it out, their mutual attraction overwhelms them.

In desperation, Dekker renounces Grey as his Alpha.

But when another force tries to punish Dekker by silencing him forever, Grey must choose which stand he’ll take…being the alpha for all his pack, or being the man Dekker needs, even if it means breaking the rules. 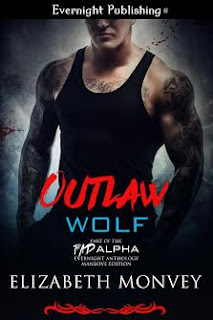 Awareness suddenly coursed through him, the same feeling just before lightning struck.  The anticipation of something momentous was just about to happen.  In slow motion, Dekker saw Grey stiffen.  Saw the biker raise his nose and sniff the air.  Like a deer caught in headlights, Dekker was unable to turn away as Grey scanned the room, and then their eyes met.  Locked.  The world disappeared around them.  He’d been a fool to think time and distance would’ve been enough to sever the bond that arched between them, in a mere instant the electrifying tangent that had always existed between them snapped tautly into place.
The second biker leaned into Grey, and Dekker dragged his gaze from Grey’s to glance at the other man.  Stones, the club’s enforcer, and the pack’s most vicious wolf.  He was older then them both by about twenty years, but Stones’ age had never been a liability.  He was the only person Dekker truly feared.
Grey shook his head sharply and walked away from Stones, heading directly toward him.  Dekker took a deep breath, unable to move or even look away.  Fury darkened Grey’s face, turning his golden eyes into cold flecks of amber.  The premature gray in his hair, responsible for his name, glowed in the dim lighting.  Dekker waited, gripping the broom handle tightly.  He couldn’t save himself.  There would be no turning and running away like last time.
Grey came to a stop in front of him, glaring at him from his superior height.  They’d known each other their whole lives, having grown up in the club and pack, and Grey had always been taller.  Stronger.  Bigger.  Dekker hadn’t minded.  That had been some of the things that had drawn him to Grey.
“You’ve been here all this time?” Grey demanded.
Dekker shrugged, unable to form words past the lump in his throat.
“No,” Grey said harshly.  “You don’t get to shrug this off.  We searched everywhere for you.  I wouldn’t give up even when they told me to.”
Dekker looked around, knowing that everyone was listening avidly.  The last thing he wanted was to air their past to gossip mongers, which was exactly what the small backwoods community was.  Small-town life seemed to thrive on swapping stories of what went on behind closed doors.
“Let’s not hash this out here, Grey,” Dekker said, leaning closer to keep his voice down.
Grey folded his arms.  “I’m not leaving.”
“Fine. Could you at least wait until after my shift?  I only have half an hour left.”
Indecision warred through Grey’s eyes, but finally, he gave a stiff nod.  “Fine.  But I’m not leaving this bar without you."