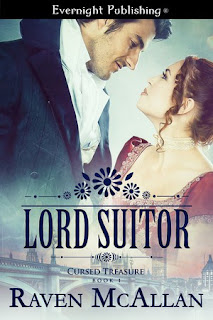 Thanks for inviting me over. I have cookies…gluten free, home made and tasty.

They shouted at me. I'm very much a pantster at the beginning and they tell me what to do and explain themselves to me. I have learned to ignore them at my peril. Sometimes, like in Lord Suitor they kindly give me a rough plot. Other times I wing it. Places I visit will sometimes give me an idea and it goes from there

The details about Devon are based on a village I love to visit for holidays. The whippet is based on my friend's whippet who visits and tries to push my lap top away and take its place. Also called Brodie.

Nope. I'm lucky that I can write anywhere at any time. I just open my laptop and block out what's going on. I swear one day I'm going to write a book called hotel bathroom floors I have sat on to write. I admit I travel quite a lot and they bathroom scenario is so I can write and not wake hubby up in the early hours.
Q) How much real life do you put into or influences your books?

I guess it depends on what you mean my real life. I do try to think how I, or people I know would rect in certain situations. I'm writing about 200 years ago  in my Regency ones so it's not real life as we know it. I do research extensively to make sure I get my facts as correct as I can.

In my present day ones there's quite a lot of my real life slips in. For instance there seems to be a lot of gluten intollerant or people who are coealiac in my present dy books, like myslef and another member of my family. Left handedness as well.

And in all my books, I often (okay most of the time) set my books in places I have either lived, live now, or visit a lot.

Where to start? I have another five books in this series, of which two more are written and three to be written. I have a Christmas contemporary short story to be published by Evernight, and have just had another Regency short accepted. My first of a two book series, The Scandalous Proposal of Lord Bennett is due out on September 9th, from Carina, and the second book as yet untitled in the New Year. Oh and I have two more books in my Diomhair series with Totally Bound to finish. Then there's the next in the Their Wives series and one more Dommissimma that's shouting loudly, both for Evernight, that I must write and the next challenge book for Siren. That doesn't include anything else that shouts at me and jumps the queue. And I really am slowing down. 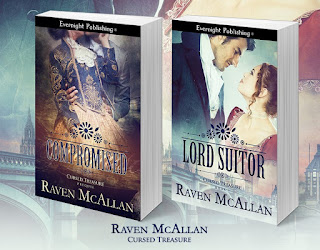 Thank you for inviting me onto your blog. I consider myself very lucky. I write what I love, Evernight publish it, and people buy it and (hopefully) read it. What more can I ask for?
I couldn't not write and I especially love to write Regency Romance. And oh yes, Evernight lets me. So we have the Cursed Treasure series.
A family whose fortune is cursed
A family whose fortune is almost gone, and have to manage very carefully.
A family whose grown up children decide to ignore the curse and make their fortune grow once more. They don't want to be a burden.
Strangely ( or not) this isn't a paranormal story. Only the treasure is said to be cursed. As the parchment with it says…
The heart of ye child be lifting the curse—dare ye risk it…

Lord Suitor is Tessa's story
A smuggler and an aristocrat. Who should Tessa chose?
Both professed their love for her, both intrigued her. How could she pick one over the other?
When Tessa was accosted by a smuggler her life took a turn for the better. Or so she thought. Until Nathaniel, Lord Fenniston indicated his interest in her. She had to marry to help her family, but her loyalties are torn.
Either man could be the one, but how can she decide? Torn between them, Tessa must think hard and fast.
Luckily, fate has it’s own way of deciding, and Tessa had no option but to do as it dictates.

Her one night of bliss, her initiation, as she thought of it, had given her a very definite opinion of what she wanted, expected, from any marriage. However, and there was the rub, how could she say to someone, I’ll only marry you if you satisfy me in the way my smuggler did? You need to make my skin tingle, my insides quiver, and my body react in a way I never thought possible, so I shout and scream my release and beg you for more? Oh and your body, when it gains its own satisfaction inside me, has to react in the same way? It was not something she could introduce into everyday conversation. It wasn't something most men would appreciate hearing. Men were such touchy creatures they wouldn't see it as a compliment on their prowess, just the opposite.
Tessa stirred uneasily in her chair. During those long hours of enforced darkness, her highwayman had taught her some very interesting ways to satisfy herself. After the first few fumbling—and embarrassed at her temerity—attempts, she was happy with how to touch and tease herself until she was panting and sated. However, it wasn't the same. It is not him.
Tonight though, she knew nothing she did would ease the ache deep inside her. The unexpected offer from Lord Fenniston had thrown her somewhat.
Why her? Oh, they were neighbors in Devon, but he had never shown any interest in her. In fact she hadn't noticed him singling her out in any way, exactly the opposite. One occasional country dance did not show a partiality for anyone. They'd never waltzed, he'd never asked for her hand into supper, and never solicited her company at a picnic or to the theater. No, if anything, she would have thought he preferred Lady Elizabeth Cantor or Frederica Stowe. Nor did Tessa think he chose to spend time with those ladies as a smokescreen for his desire to have her as a wife. They were both too much all woman for that, and she was well aware neither would put up with such cavalier behavior.
Nor would I.
Somehow, Tessa accepted, as she stirred the glowing coals back into flames, Nathaniel Fenniston was not the sort of man to dissemble in that way. It wouldn't be kind to either lady, and she didn't think he would ever be deliberately unkind. No, he was an honorable man, but did that mean he was the man for her? Somehow, she needed to find out. On that sobering and complicated thought, she put the fireguard in place and took herself to bed.
Yet again she dreamed of her smuggler. She felt his hands on her as he showed her how to please both him and herself. Heard his voice as he praised her efforts and moaned his appreciation. Recalled and recreated in her dreams how his body stiffened and he shouted out his completion as he spilled onto her skin. Shivered and writhed as his lips met her quim and sucked on the soft flesh there and then drew the hard nub into his mouth. She gasped as her juices gathered, ready to help her fall over the edge of sanity and reason.
Tessa woke with a gasp to see the thin light of dawn creep around her curtains, and to feel the warmth and dampness of her arousal slick her skin. Her body tingled with awareness. Should she?
A quick glance at the timepiece on the mantel told her she had time enough to assuage her needs.
Tessa stretched out to fumble in her nearby sewing basket, to retrieve something she had secreted there.
A few days after her encounter with the smuggler she'd found a package in her bedside cabinet. She had no idea where it had come from, or who had placed it where she would see it so readily. The outside wrapper merely had her name on, and the cryptic message "for your eyes only."
Puzzled she ripped the paper and unwrapped the fine lawn material that covered the contents. It was a smooth, wooden darning mushroom, with a note attached to it.
When she read the words, Tessa didn't know whether to laugh or cry. Inscribed in a very elegant hand it said: Close your eyes and run your fingers over this. Now imagine what it feels like and use it accordingly until we meet again.
Intrigued, Tessa had done as directed and discovered it was the perfect facsimile of a male staff. "Pego" her smuggler had called it as he taught her how to fondle and taste. At first she'd held it and stroked it, until her mind played games on her. A few nights later, her dreams included him, his pego, and his hands showing her how indeed a humble darning mushroom was the perfect substitute for a man. No, not perfect, she amended, adequate. 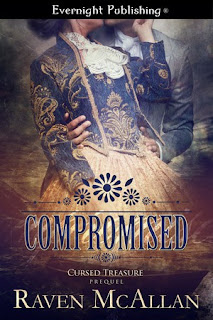 (the prequel, Compromised, tells how Mijo escapes from France with the treasure, it's a free read.)
www.evernightpublishing.com/compromised-by-raven-mcallan/

you can find me at www.ravenmcallan.com