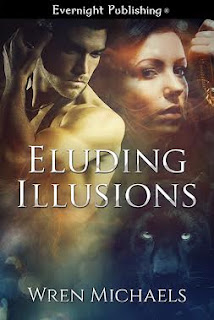 Well, I actually based Jake Griffin on Josh Groban. LOL I have been obsessed with that man forever and decided to put him in one of my stories. As for Emma, well I wanted to do something different in the paranormal world outside of vampires, witches, weres etc. So I went with old-world Gypsy magick and built it from there. Dragos kind of came out of nowhere and was the first shifter I ever wrote about.

Well this will be a spoiler. So AVERT THINE EYES if you don't want to be privy to info before you read it. But in the original version of ELUDING ILLUSIONS, I killed off Dragos completely. Only after my CP's gave me several lashings about it did I work him back into the story. So if you liked the Dragos character, thank my CP's, Jennifer and Sonia.

Music is my go-to muse. I try to use cultural based music for my diverse characters to help me channel the feel of the setting and people.

Well this one had a bit because of my love for Josh Groban. So a lot of Jake's nuances and comic relief are a result of Josh's funny personality.

Well I'm deep into the writing cave now, working on a couple different projects. I left my naughty fairy tales open for some follow up books, so I'll be tackling those soon!

Emma Banciu dreams about her novels taking on a life of their own. Thanks to a centuries old Gypsy curse, they tend to do just that. Writing with pen and paper she brings things to life, and hell hath no fury like an antagonist scorned. Now she's on the run from Kyrin, an evil demon warlord who surfaced from one of her first manuscripts. And the only way to get rid of him is to destroy the manuscript.

Enter JG1988, her long-time online friend. He knows nothing of the curse nor the magick Emma possesses. His only wish is to finally meet her in person and take their relationship to the next level. He reveals a surprise of his own when he shows up at Emma's door as international recording artist
Jake Griffin.

Destroying the manuscript will not only get rid of Kyrin, but also end her relationship with Jake. But keeping secrets from him may end up doing just that. In order to survive they'll resort to love, lies, and a little Gypsy magick.

Excerpt
Jake lead her into the adjoining room where a baby grand piano sat in the corner.
Turning the piano bench sideways, he sat back and motioned for her to sit in front of him. His arms slid alongside her shoulders as he reached out for the ivory bars, and he tightened his legs against her outer thighs. The heat radiating off him surrounded Emma like a blanket of safety. She snuggled up against his chest as his fingers tickled the keys.
Succumbing to the enchanting melody, her eyes fell closed. His chest pressed against her back, rising and falling as he sang out the verses he wrote just for her, simply titled, Emma's Song. The words took her breath away how he spoke so lovingly of her through song. Each refrain more passion filled than the one before, pouring his heart out with each note. The emotions welling up inside confused her, as she let herself become entranced by his baritone voice. Fear and happiness pooled in her eyes, releasing in tears that slid over her cheeks.
They met for the first time tonight in person yet it felt like they had known each other all their lives. Their electronic relationship manifesting into something real and tangible excited her, but also scared her to death.
The keys stopped dancing, and the room held a silence marred only by the heaving of Jake's breath. Reopening her eyes, Emma turned her head toward him. His fingertips pressed against her jaw line, guiding her head as he leaned in. Their lips met with a cautious tenderness. She swung her body around on the seat, raising her hands to encompass his neck. He pulled her closer, parting her lips as he swept his tongue over hers. An innate ache pulsed through her, taking over her self-control. His very touch tingled every nerve along the way.
She slipped her fingers through the back of his wavy hair, massaging his head in rhythm with their exploratory kisses. His breathing grew heavier, as he cradled her in his arms. A startling mixture of sharp chords rang out through the air as her back landed against the keys.
Soft laughter danced through their kiss as Jake picked her up by the hips off the bench and placed her on top of the baby grand. Her chest heaved in succession with the thumping of her heart. He stared at her with such intent she'd never seen. His intense eyes hypnotized her, holding her gaze.
“I've pictured this a thousand times, but nothing compares to the actual taste of your lips,” he whispered, as he laid her back, brushing the chestnut locks of hair from her face. Lush lips caressed her neck, kissing the delicate skin down the plunging neckline of her dress.
Words made no sense. They circulated in her head, jumbled by the emotions coursing through her. Her body ached for him to take her completely as his hands caressed the length of her body, exploring every inch of her, memorizing every curve.
She dreamed about this moment. He wanted her as much as she wanted him. Her head screamed no, she'd only hurt him. But her heart shouted louder as she let her fingers ride up the length of his forearms, pressing against the hard muscle.
“As breathtaking as you look sprawled across my piano, I have a better idea,” he whispered.
Pulling her to him, he slid her off the piano. She wrapped her arms and legs around him as he carried her to the sofa, laying her beneath him. Carefully, he slid the silken dress above her hips, exposing her stomach where he decorated her skin with the warmth of his tongue and lips. A shiver climbed her spine releasing itself in a vocal aching of want and need.

Wren Michaels hails from the frozen tundra of Wisconsin where beer and cheese are their own food groups. But a cowboy swept her off her feet, and carried her away below the Mason-Dixon line where she promptly lost all tolerance for snow and cold. They decided they'd make beautiful babies together and they got it right on the first try. Now Wren lives happily ever after in the real world and in the worlds of her making, where she creates book boyfriends for the masses to crave.