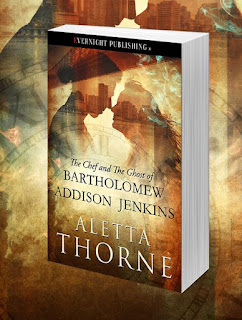 Hello Aletta!  Thank you so much for visiting Written Butterfly with me today!  It’s such a pleasure to chat with you.  So tell me…

I am a “pantser,” which is to say that I write by the seat of my pants.  I don’t plan.  I put my characters together and let them talk—and see where the conversations lead!  It’s funny how much that feels like watching something instead of creating something.  In the case of my main character Alma, I guess it’s not too surprising she’d WANT to have a handsome and courtly Colonial era gentleman haunting her apartment…but who the gentleman turned out to be and what he could and would do was quite a surprise even to me.  Bart  really is a talented fellow!

A lot of the ghostly stuff in this book is based on a ghost investigation that took place in my own house, which is haunted.  Well…maybe not all of it (insert bright red blush here).

What I just said: I live in a haunted house.  The ghost in my writing study tossed a brass floor lamp around this time of the year a few Halloweens back.  And I wanted to write a romance with a woman chef in it because back in my twenties and thirties, I cheffed.

Lots.  Some stuff just invents itself, but I use friends’ names, the general characters of old boyfriends, places I’ve been…The Hudson River is almost a character in this book, and it’s because I love it so much.  And all my books (I’ve written a bunch of YA under another name, but this is my first adult romance) are Hudson River Valley because I live here.  Plus—hey, if you’re writing a ghost story, there is no place spookier!

I had an idea for a romance about an older woman who is trying to live in a tiny house.  I’ve written a little of that.  I’m also a poet (under a different name) with third collection coming out in the spring. 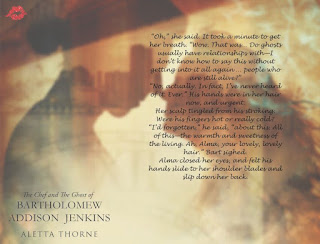 Halloween, 1982. MTV is new, poodle perms are the rage, and life just might be getting better for Alma Kobel.  Her ugly divorce is final at last. Her new job as chef at Bright Day School’s gorgeous old estate is actually fun.  But the place is haunted—and so is Alma’s apartment.

Bartholomew Addison Jenkins’ ghost has been invisibly watching Alma for months.  When he materializes one night, Alma discovers Bart—as he likes to be called--has talents she couldn’t have imagined…and a horrifying past.

Can you have a one-nighter with a ghost?  And what happens if you decide one night is all you want—and end up ghosting him?  Some spirits don’t like taking “no” for an answer.

Buy links are not up yet.  We’re still COMING SOON FROM EVERNIGHT, but should be out on Friday the 27th.

“You’ll turn over the record. Oh, because you…”
“I do like to keep up. Who poured you wine from the … refrigerator? Although, I don’t understand why people of your age prefer it so icy.”
Alma followed Bart into the living room, still wondering why things didn’t seem odder than they were. She remembered the Casper the Friendly Ghost cartoons she’d seen as a little girl. This ghost was acting—well, perhaps a bit more flirty than friendly. He only glowed a bit as they walked through the dim hallway that connected her rooms. You can hardly even tell he’s translucent. What had he seen of her, though? She was glad her frustrating night with Sid had been at his place.
As Bart bent over the turntable and flipped the record, the reading lamp by her couch highlighted the silver buttons of his coat. She curled up on the couch and put her wine glass on the glass-covered orange crate she’d turned into a coffee table.
Bart sat beside her, suspiciously close. He put an arm over the back of the couch, and Alma shook her head again. That’s the old sneaky-arm trick—like a high school kid. It’s kind of cute. She pulled her legs up under herself, and they quietly listened to the music.
“You’re right,” she said after a few minutes. “‘Fountains’ is really good, too. I almost never listen to that side.”
Bart made a quiet harrumphing noise.
Do ghosts clear their throats? Apparently so.
“Dear lady,” he said. “Although I do try not to snoop, as you would say, I have indeed observed your solitude. Let me assure you, your life will soon be happier.” He slid even closer to her.
Okay. Now the ghost is absolutely coming on to me. This is really happening. Oh, hell—why not? He’s not bad—for a dead guy.
“Um, Bart?” she said. His eyes really were a startling color—almost bronze… “You can’t actually be…”
Bart set his fingertips on her cheeks, looked into her eyes, and sighed. Then he smiled. “You think this is a ridiculous situation. It’s not ridiculous,” he said. “Not at all. Allow me to demonstrate … with your permission, m’lady.”
Somehow, that was funny, and Alma giggled. “Granted.”
Bart’s hands were impossibly soft and gentle—and his touch had some of the same fire-and-ice buzz that she’d felt before in the kitchen when he’d tried to get her attention. He guided her lips to his, and gave her what would have been a tiny peck—from anyone else. It shot a bolt of fire straight through her.
“Oh,” she said. It took a minute to get her breath. 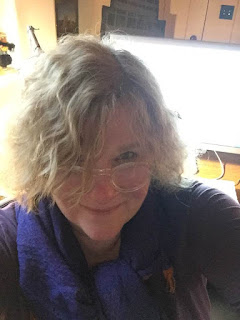 Aletta Thorne believes in ghosts.  In her non-writing life, she is a choral singer, a poet, a sometimes DJ, and a writer about things non-supernatural.  But she’s happiest in front of a glowing screen, giving voice to whoever it is that got her two cats all riled up at three AM.  Yes, her house is the oldest one on her street.  And of course, it’s quite seriously haunted (scared the ghost investigator who came to check it out).  She is named after a little girl in her family who died in the late nineteenth century, at the age of two.


My social media:
https://www.facebook.com/alettasghosts/
Posted by Beth D. Carter at 7:01 AM