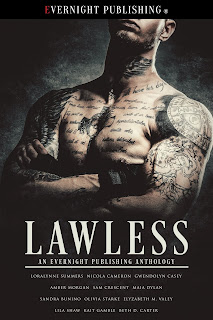 
Meet the hardcore heroes of LAWLESS! They’re fearless, dangerous, big on revenge, and defiantly walk on the wrong side of the law. Although their morals may be compromised, their loyalty to that one woman is never in question.

Our twelve hand-picked novellas are dark, dirty, and will make you see bad boys in a whole new light. From bikers to hitmen, these dangerous men won’t be satisfied until they have everything they came for—until they have her.


The King of South Side by Loralynne Summers
Gentleman Jackson by Nicola Cameron
Hungry Eyes (The Covenant) by Gwendolyn Casey
Vandal by Amber Morgan
Given to a Killer by Sam Crescent
Angel Mine by Maia Dylan
Kiss of Death (Dark Heart) by Sandra Bunino
Hitman's Seduction by Olivia Starke
Hitman's Angel by Elyzabeth M. VaLey
Eli Logan's Return by Lila Shaw
Trust by Kait Gamble
The Last DiLuca by Beth D. Carter 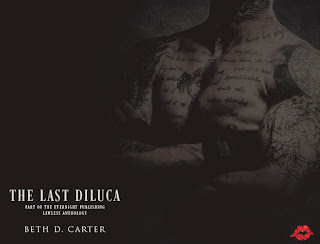 When Michael Slade , VP of The White Death MC, learns the DiLuca Borgata has been killed in one fell swoop, he’s devastated at the loss.  His estranged wife, Normandy, had been the only daughter of Tony DiLuca, and the only woman he ever loved. Needing answers, he rides to St. Louis in hopes of finding them.

Drowning his grief at their local bar seemed like the perfect answer until he gets a phone call from Normandy, telling him she’s in hiding. He rushes to her side, reunited with the only woman who would ever own his heart.

Only they have to now dodge the bullets from whoever wants them dead. Slade must figure out who’s after Normandy before the assassin finishes the job.

(This story is set within The Forgotten Rebels MC world)
Posted by Beth D. Carter at 10:05 AM