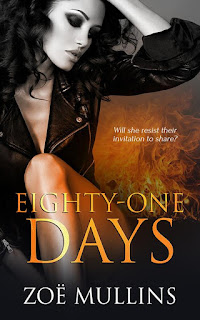 Hello Zoe!  Thank you so much for visiting Written Butterfly with me today!  It’s such a pleasure to chat with you.  So tell me…

Eighty-One Days is a novella but it actually started life off as a short story. I had developed first for an anthology. It was shortlisted but didn’t make the final cut. I was thankful for that because by then I had fallen in love with the characters. There was so much about their history that I didn’t have the chance to explore in the short story version, like Eric’s job as a forest fire fighter and why he had chosen such a high-risk profession.

I grew up in Northern Ontario, Canada. It’s an area of extreme beauty but also extreme danger. Forest fires are common each summer – even when it’s not a particularly dry summer. Whether man-made or nature-made, it’s a reality that you deal with in that area, and I’ve been in awe of the men and women who battle those blazes. So that’s where the ‘spark’ of creation for this story began. And even though I always meant it as a standalone novella, I introduced the rest of Eric’s team at the end of the story and I can see coming back to them one day to explore their stories.

I plan my characters more than I plan the plot of the book. I want to know not only what they look like but what may have shaped their experience. How did they grow up? Were their parents together or did they split up? How did that affect them? What were they like in school? Did they have a lot of friends? What did they want to be when they grew up and were they successful or did they have to change gears along the way and how did that change them?

Because when it comes to plot I basically fly by the seat of my pants, it’s important that I know my characters and can gauge their reactions to any given situation. Not that they don’t surprise me sometimes, and when that happens, I tend to let them take the lead even if that means we go in a direction I hadn’t planned.

I base my locations on real places or an amalgamation of many places. I moved a lot as a youngster and soaked up a lot of details about the cities and towns that we came to. I also met a lot of people – who we’d later lose touch with, but on whom, I’m sure, I’ve based some of my characters’ mannerisms or speech patterns on. But I can swear on a bible that no one currently in my life has made it into the books and while I’d love to claim some of the experiences of my heroines, I am content to live vicariously through them.

I always have a few projects in the works. Right now I am finishing off Playing it Cool, the second novella in the Men of Steele novella series. It will be out before Christmas. And I’m working on the final edits to the first in a paranormal romance series that I’m quite excited about.

Eric didn’t know Luke would be heartbroken when he left town to join a hotshot forest fire crew in Western Canada. They’d been best friends since kindergarten, had gone to school together, had bought their first car and a home together, and had shared their lovers. At some point, friendship had turned to love.

Luke didn’t expect that when he’d brought his crazy cat in for stitches that his heart that would be mended by the sassy new veterinarian. Jenna may have been new in town but she’d heard the rumors and she liked the carnal fantasies he spun for her in bed of he and his best friend sharing her.

Of course, that was before Eric’s job brought him home and back into their lives.

Jenna isn’t sure she can be what they need, but she’s not going give up without a fight. Even if that means inviting the sexy firefighter to share their bed. Surely there is enough love to go around.

Luke woke to the sound of the shower and lifted his head. Jenna was still curled into his side, but Eric was gone. He heard the shower turn off as he swung his legs over the side of the bed and grabbed his boxers. By the time he made it to the bathroom door, Eric was already pulling on his track pants.

“Did you sleep at all?” he asked, running a hand back through his unruly hair.

“Not nearly.” Luke hung back by the door. Now that the lustful haze of last night was over, he wasn’t sure where that left them. He knew where he wanted them to be. He sighed, closing his eyes and letting his head fall back against the doorframe. This had the potential to be a total clusterfuck.
Eric must have realized where his thoughts were going, and his worries. “Screw it,” Eric cursed. “Get over here and kiss me good morning.”

Luke dropped his jaw in surprise but he wasted no time complying. He cupped Eric’s jaw in his hands as he kissed him. Eric deepened the kiss, their tongues colliding, as he pushed Luke against the bathroom vanity, his thighs bracketing him in place. He wrapped his arms around his waist.

He had missed this, missed Eric’s roughness. Missed the way he always had to control the encounter.

Eric drew back a few inches to bite at Luke’s lips. “You still taste like Jenna. I like it.”

“And you taste of mint.”

“You can borrow my toothbrush,” he offered, smirking.

“I’d rather fuck you.” Eric squeezed his ass.

“You would?” Luke swallowed hard, his cock twitching at the thought. He knew Eric had fucked other guys, but he’d never even suggested that they try. “I told Jenna we weren’t lovers.”

“I take it you were quite narrow in your definition. For her sake or yours?”

“Both. We’ve never done that.” Luke hesitated. “I wasn’t sure you wanted to.”

It was a good thing the bathroom vanity was behind him because his legs went weak at the thought.

“You can’t just say shit like that,” he complained. “You don’t know what that does to me.”

“I have a good idea.” Eric ground his hips against Luke. “But first I need coffee, maybe the whole pot, while you shower. Then the three of us need to talk. We can’t put it off. Regardless of what we did last night.”

“Go to our place. We have more food,” Luke suggested. “And I don’t think the talk will be as hard as you imagine.”

“We’ll see.” Eric didn’t look convinced, but he didn’t know Jen the way Luke did. Jen wasn’t going to back down from something just because it was difficult.

A prolific writer, even in elementary school, Zoë was jotting down poems and stories whenever she had the chance - usually during math class.

After many years of working in corporate communications, Zoë decided in 2015 it was time to focus her energy on the kind of writing she loved – hot romances with strong, alpha heroes and quirky, independent heroines.

Zoë’s husband of 20+ years threw his full support behind her dream and loves to tell people his wife is a romance author. They live in Atlantic Canada with their two crazy collies. When not at her computer, you will find Zoë chasing after her muddy dogs, working in the garden or helping to renovate their money-pit of a house.

For more information visit www.zoemullins.ca or subscribe to her newsletter at http://eepurl.com/cjnKCn