Love at the End of the World - 2nd Story Profile! 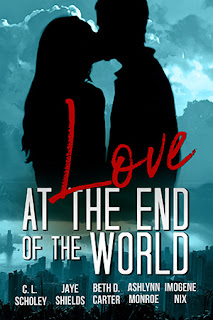 BLURB
The Reset by Imogene Nix


Elaine is just an ordinary woman, but when the apocalypse occurs, she must find a way to survive in an increasingly hostile world. Enter Liam, the policeman who saves her at their first meeting and provides assistance as they try to cope with the zombie outbreak brought about by an unknown infection that’s spreading out of control.


Together they form a community, trying to save as many lives as they can, a place where people can be safe. Even in the throes of disaster though, emotions creep up, taking both of them by surprise. Who knows? They might just get their happy ever after...if they can survive.


This is actually going to be the first story in a whole new series (I started writing it about a year ago, but haven’t finished it… I didn’t realise I’d need this story first!)


It was simple. My daughter wanted a zombie story and a friend kind of talked me into it…


I’d like to think I would. I’m resourceful enough to have thought up this scenario after all J

Imogene is published in a range of romance genres including Paranormal, Science Fiction and Contemporary. She is mainly published in the UK and USA due to the nature of her tales.

In 2011, Imogene Nix (the pen name not Imogene herself) was born. Imogene sat down and worked tirelessly for 3 months culminating in the books Starline, which became the first in a trilogy titled, "Warriors of the Elector."

Imogene has successfully been contracted for twenty-five titles.  She has also completed several others. In 2017 Imogene decided to self publish most of her further works - a plan which is in train.

Imogene is a member of a range of professional organisations world wide, and believes in the mantra of mentoring and paying it forward.
​
She loves to drink coffee, wine & eat chocolate and is parenting 2 spoiled dogs and a ferocious cat along with her husband and 2 human daughters.