Blast from the Past - Spotlighting "Second Time Love" 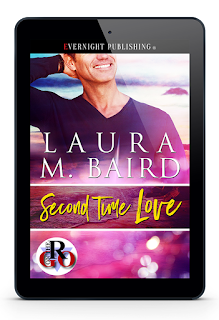 After thirty years of marriage, Grace becomes widowed at age fifty, and never thinks she’ll love again.  That is until she goes on a trip meant for her and her late husband, and meets sexy Cole.
She’s enchanted by him and the fun he’s having with his granddaughter on the beach.  Talk turns into more, and Grace is ready to open her heart to a second time love.

1.       Did you plot this book out or write wherever an idea took you?
It started with a small idea – a woman grieving after losing her husband.  Then it kind of took on a life of its own.

2.       What was your hardest scene to write in this book?
The beginning, when we feel Grace’s grief.  Putting myself in her ‘shoes’, relaying what it must feel like to lose your love.

4.       Since the publication, what would you say has improved in your writing?
Story development; writing what I want to convey – not what others think I should write.

5.       Did you leave out anything in this book that you wished you hadn’t?
Yes, looking back, I would have lengthened the get-to-know-you phase of Grace and Cole’s relationship; added more details.

6.       Do you believe a book cover plays an important role in the selling process?
Yes! I want covers to truly reflect the work, because books are judged by the covers! They need to catch attention, and be readable.

7.       Any advice you would like to give to your younger self?
My younger, younger self – take more chances!  As for my younger writer-self (having only been published less than a year) I’m a work-in-progress. I’ll continue to work on being a well-rounded author, putting out stories I can be proud of!

The calmness of the beach was like a balm on Grace’s soul, the beautifully clear ocean water hypnotic and inviting. She walked its edge, allowing the small surf to roll over her feet and ankles, and earning her a glimpse of shells and starfish along the way. When she had walked so far as to round the small peninsula and catch sight of another resort, she decided to turn around and make her way back.
The sound of laughter had her turning again. She saw a little girl in a pink bathing suit running her way, long, blonde hair billowing behind her. As well as a shirtless man who was giving chase. Grace watched as the man would get close enough to playfully swipe the girl’s behind, then feign fatigue before catching up to her again. Her antics of darting left and right, and the giggling brought a smile to Grace’s face. Before she realized she had remained rooted to her spot, watching the delightful scene, the little girl was suddenly in front of Grace, running around her like they were old friends.
She smiled down upon the girl who decided to clutch Grace’s legs and hide behind her.
“Don’t let him find me,” she whispered before giggling.
When Grace looked up, a strikingly handsome man stood before her. He wore only swim trunks that showed off his tanned and muscular body. His gaze was uncertain as it roamed her face, almost as if he’d been stunned. He opened his mouth, hesitated, and then finally spoke. “You, uh, you wouldn’t happen to have seen a little girl running around here? She’s about this high,” he continued, holding his hand close to his waist, “with long, blonde hair.”
Grace’s gaze was drawn to his defined abs and those delicious dips running toward his hips that his low-slung shorts revealed. She suddenly blushed when she realized where her concentration had been. As she peered back to his face, his eyes held such intrigue that something compelled her to play along.
“I’m sorry, but no little girls around here. Just me.” She smiled. And was rewarded with a knee-weakening smile in return. The man before her seemed about her age, with short, black hair that was graying at the temples and deep-blue eyes that held both maturity and mischief. Mostly black hair dusted his chest and limbs with perfection. He was absolutely swoon-worthy.
“Well, that’s a shame.” A playful pout formed on his lips. Full lips that would no doubt make a woman sigh when they landed on hers. “Because I promised that little girl a piggy-back ride to the lodge for ice cream. I guess if she’s not here I’ll have to eat ice cream all by myself.”
As he began to turn away, the little girl squealed, deciding ice cream was a far better option than playing hide-and-seek. She ran around Grace and squealed, “Grandpa! I’m right here!”
Grandpa?
“Oh my goodness, there you are!”
Grace couldn’t help but chuckle at the fun these two were having. The little girl flew at the man who scooped her up in his arms, swinging her onto his shoulders with ease. As they continued to laugh, the man’s gaze landed on Grace again.
“I’m sorry. We seemed to have corralled you into our little game. I hope we aren’t keeping you from anything?” “Oh no, I was just out for a walk by myself. You’re a pretty good runner there, missy,” Grace said to the little girl.
“I beat Grandpa every time!” She beamed, causing Grace to laugh.
“I’m Cole,” the man said. “And this little speed demon is my granddaughter, Eliza.”
“Nice to meet you both. I’m Grace.”
“That’s a pretty name,” Eliza said. “Would you like to have ice cream with us?” She wiggled atop the shoulders of her grandpa as she mussed his hair. “I’m going to get vanilla with chocolate sprinkles. What’s your favorite?”
Before Grace could answer, Cole spoke. “Eliza can get pretty excited about ice cream. We’ll, uh, we’ll let you continue with your walk. Sorry to have bothered you.”
When he started to take a step back and turn, Grace spoke out. “It was no bother, really.” She looked from Cole to Eliza. “And I like Neapolitan.” Why she felt the need to continue to engage, she had no idea, but she didn’t want to be finished with the delightful little girl and her stunning grandpa.
“Neapololitan,” Eliza tried to say.
“Close,” Cole said. “It’s the vanilla-strawberry-chocolate together, remember?”
“Yes! Like what we had for your birthday, Grandpa!”
Cole chuckled. “That’s right.” He looked at Grace. “It’s my favorite, too.”