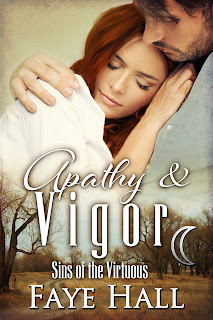 Welcome back, Faye!  Thank you so much for visiting Written Butterfly with me today!  It’s such a pleasure to chat with you.  So tell me…


In my newest release, I needed my characters to display both apathy and vigor for not only their life, but also for each other.  I also needed to give them a strength that could survive what they were being put through.  Of all my books, I found Tristen and Amalie from Apathy & Vigor the most challenging and also the most rewarding to write.

Yes, Apathy & Vigor is the fourth book from the Sins of the Virtuous series.  My aim in the series is to create characters that display both a seven deadly sin and its matching heavenly virtue all tied together in a passion driven tale.


The lawyer that is briefly mentioned in the book, Mathew Porter, also appears in the third book of the series, Avarice & Charity.


My weakest is easily writing a synopsis.  My strongest I think is trying to make my books authentically and uniquely Australian.


Q) Do you have any habits that get you in the writing frame of mind?


I watch a lot of musicals while I’m writing my drafts like Chess, and Phantom of the Opera.


I plan basic things like height and hair color and so on, but their personalities mostly develop as the book grows.


All my books have some part of real life events in them to some degree.  I use a lot of my husband’s traits in my heroes as well as use actual building  and place descriptions from my hometown.


I’m currently finishing up the next book for Sins of the Virtuous.  I still have a couple more to write in the series, but after that I’m hoping to write a few stand-alone titles.  There’s also thought being put towards releasing a short book of poems and other ditties I wrote at high school.

Apathy and Vigor by Faye Hall

Will the love of a woman save him from his own apathy?

Tristen Brone lived a carefree life of wealth and passion...until it all came crashing down around him. The night Tristen’s best friend died in a fire, Tristen tried to save him, but he failed. Not only did Jacob die, but Tristen is left with scars that make him feel like a monster. There are those in town who think Tristen is responsible for starting the fire, which includes Jacob’s sister, the woman Tristen is in love with. The once confident, handsome, young man is now on a downward spiral of sorrow and depression.

Soon after Amalie Fergus lost her brother in a fire, her father died and their family properties were repossessed. She had nothing left and no one to turn to. When she took a job as a maid for a wealthy gentleman she never expected that he would try to force himself on her, or that she would now be on the run for his murder.

Running from the scene of the crime, Amalie collides with a man from her past who offers to keep her safe from the police on one condition—she return to Tristen and steal some property papers from him.

When Amalie shows up at Tristen’s doorstep, begging him to take her in, he’s suspicious. Despite their passionate past, and the feelings he still has for her, all he can think about is how quickly she abandoned him. So why has she come back into his life after all these months?

With the two former lovers reunited, it becomes obvious that the passion between them is still smoldering, but can they overcome everything that stands in their way, and will they ever discover who is responsible for the fire that changed their lives forever?

“What are you doing here, Amalie?” he asked, his hands on his hips, looking every bit the commanding figure he was rumored to be.
She knew he would ask, but she didn’t think for it to be now.
“I’m not a fool,” he continued. “I haven’t heard from you nor seen you in almost a year, yet today you turn up on my doorstep. I can’t help but wonder why.”
Staring at him, she fought the urge to approach him. She wanted to hit him, hurt him as she had been by his desertion. The only thing stopping her from doing such a thing was the sorrowful look in his eyes. He looked as if he had already been hurt far more than she could ever imagine.
“If you have come here to punish me for some sin you think I have done you, I assure you, I’ve already suffered enough,” he added.
His words irritated her. Did he think he was the only one to have lost anything? Her gaze narrowed on him. “Suffered?” she asked. “What do you know about suffering? You still have your family home. You still have your businesses. I have nothing. You took everything from me.”
“I lost as much as you that night,” he said. “Surely you must know that.”
“You bastard! How dare you stand there and claim—”
Just then footsteps were heard behind him, heavy on the floorboards. “Fire!” they heard one of the station hands yell. “Fire!”
Tristen immediately turned his attention away from her. “What has happened, Robert?” he asked the gasping man hunched over just outside of the door.
She walked toward the two men, her gaze settling on the scared worker struggling to catch his breath.
“The hay shed is on fire,” Robert exclaimed. “The flames are heading toward the house!”
Tristen left at a run, the weary worker close on his heels. Amalie followed them, as if being drawn outside by the drama of it all. Her footsteps stopped on the dirt meters from the rear door. Before her, the fire was quickly engulfing the small building, the flames licking higher and higher into the sky. Seeing Tristen talking with a group of men, she cautiously forced herself to step toward them to see what was happening.
“How the hell did this happen?” Tristen demanded of his men.
Robert promptly directed the other workers to the buckets of water. “We need to get this fire out now, or else the whole station will be little more than a pile of ashes.”
Tristen grabbed at his shirt, stopping his retreat. “I want to know how this happened!” he yelled.
Robert pulled away. “Only way is if someone lit it,” he explained. “There could be no other way.”
Tristen let him go then. Amalie watched for a few moments until he joined his men. Fear filled her as she saw him reach for a hessian bag, and drenching it in the water barrel, he began to attack the flames as they directed themselves toward the house.
“Watch out!” Robert yelled as the creaks of the collapsing shed echoed through the night sky.
Still Tristen didn’t move, instead he continued fighting against the flames, looking almost desperate in his actions.
“Tristen!” she yelled as shrapnel from the falling building flew toward him.
She watched helplessly as Robert ran toward Tristen, dragging him to safety just as the burning pieces of wood landed where he’d once stood. Quickly getting to his feet, he turned instantly to face her.
“God dammit, Amalie, it’s too dangerous for you out here,” he yelled at her, running toward her. Stopping in front of her, he grabbed her elbow. “I’ll take you back to the house.”
She pulled back from him as if he were alight. She couldn’t go through this again. The last time there was a fire, she lost everything. “Get away from me!” she screamed, turning and running back toward the house. She couldn’t stay there.

About Faye…
Come on a journey with me through 19th century North Queensland, Australia and explore the passions and hardships of unique characters. There is corruption, deceit and murder, as well as cattle rustlers, slave traders and hell fire clubs. Explore townships of Jarvisfield and Inkerman, as well as Ravenswood and Bowen. One book even incorporates my great grandmothers cattle station 'Inkerman Downs Station'.

As well as an author, I am also the most spoilt wife in the world, and a very contented mother. Come and discover all the passion and drama of North Queensland history with me.