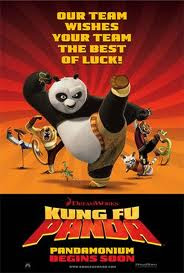 As a sequel, this movie was really good! I don't think that it would be as entertaining without seeing the first movie because this one takes off where that one ended. So that being said, if you haven't seen the first one then this review probably won't make much sense.

It was great to see that Po hadn't really changed from the first go round, at least all that much. He still craves food with an addiction that makes me sick. The first time we see him he's stuffing 40 steamy buns into his mouth!

The Furious Five have settled in and accepted him as a member of the team, even incorporating some fancy moves (from Crane) to help him along. Po, remember, can't run all that fast...or that far.

The action comes into play from the villian, Lord Chen (voiced by Gary Oldman), who "invents" cannons. He sees cannons as a way of taking control of China. He orders his wolf soldiers to gather up as much metal as possible, which bring the Furious Five and Po to defend the poor minstrals of a small town. It is here that Po sees a brand on the lead Wolf's armour that gives him a vision of a baby panda.

Shaken, confused, Po goes to his father, Mr. Ping, and asks where he has come from. Mr. Ping reluctanly tells the story of how a young baby Po came to him the week's vegetable delivery. Po comes to the conclusion that he was thrown away in the trash. Disheartened, he goes to Master Shifu for a Kung Fu lesson. The lesson is about finding inner peace, which has taken Master Shifu 50 years to find.

And then Lord Shen's plans are found out and the Furious Five plus Po go to defeat the cannons. There are many battles, lots of action, but underneath all of this is the story of how Po comes to find inner peace by making peace with his past.

The parts I really enjoyed were the flashbacks of his mother trying to save Po from the Wolf soldiers, hiding him with vegetables while she leads the pack away and, we assume, to die. As a mother, that really hit home with me. The artists did a wonderful job high-lighting the emotion of a mother leaving her child.

There was definitely a Greek tragedy feel to the story, since Lord Shen went about destroying all Pandas when a soothsayer fortold his demise by a warrior of black and white. Yes, the movie did borrow from a lot of different sources, but it came together nicely. I think one of the things that caught my attention was the great soundtrack.

I highly recommend seeing this movie in 3D. It really made the story all that more interesting, more alive. My son, who is 4 & 1/2 sat through the whole thing with his glasses on, glued to the big screen. He concluded the glasses made it into a Pop-Up movie.
Posted by Beth D. Carter at 6:48 AM