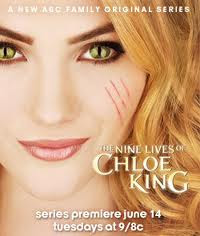 Have to admit, this is not a "movie" but I enjoyed this new television show so much I thought I would blog about it. It is on Wednesday's on ABC, but since I never really sit to watch tv, I catch it at hulu.com.

The show is about a girl, Chloe, who discovers she is a descendant of the Egyptian Goddess Bast, a protector of sorts. The show starts out with a normal sixteen year old girl decided to break the rules and enter a dance club via the back door. She meets a good looking guy, dances with him, and shares a quick good-bye kiss with him.

But strange things start happening to Chloe. She is almost hit by a car and jumps backward, high in the air to save herself. She is attacked by a homeless man and scratches him across the face with her cat-like nails. She falls out of window and lands on her feet.

There is a mystery, of course, and bad guys chasing her. One pushes her out of a tower and she falls to her death, only to come back alive a moment later. This miraculous feat seems to make her some type of "uniter" who has nine lives. The bad guys, for some reason, want the rest of her eight lives to be quick.

Along with the danger, the super-powers, and the ancient lineage, are cute boys, best friends, and handling school. I'm almost reminded of Buffy, in a non-demony way.

I hope the continuation of the show is as promising as the pilot. I'll be turning to hulu.com to check it out!
Posted by Beth D. Carter at 8:55 PM