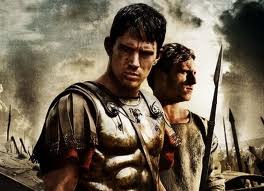 Having just finished watching one of my favorite movies, The Eagle, with Channing Tatum and Jamie Bell, I was inspired to blog about bromance.  I love a good bromance, two beautiful men who find each other due to whatever outside force is driving them together.  Originally, bromance was described as two heterosexual men who are friends, but come on…really?

There are the obvious bromances like Spock/Captain Kirk (both the old and new actors), Ben Affleck/Matt Damon and George Clooney/Brad Pitt.  Now, I don’t claim to be an expert at knowing every single bromance out there; I don’t watch a lot of television or see many films, but here are a list of my top five bromances of the television or film age.
1)      As mentioned before, Channing Tatum and Jamie Bell in The Eagle.  Why?  Two men,
epic adventure, ancient .  Need I say more?  Well, okay, how about the first time Channing’s
character, Marcus, lays eyes on Jamie’s, Esca.  Esca is fighting in a “gladiator” type of sporting event
because he’s a slave.  He refuses to play the game, defying the champion by daring to be killed instead of
fighting.  His actions of bravery earn Marcus’s admiration and Marcus votes “thumbs up” to save him.
When the two make eye contact…
wowser!  Of course, Esca is bought to become his slave and the 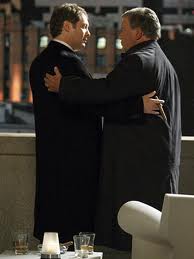 two head off to find a long lost Roman statue, bringing the two men closer together.  At the end they walk off into the sunset together.
It’s just lovely to see!
2)      Next is Denny Crane and , two characters from Boston Legal played by William Shatner and James Spader.  Why?  These two characters always finished the episode by sitting and drinking together after the end of a long day.  There was a love between them that defied age, gender and beliefs.  At the end of the series, they even marry so that Alan can take care of Denny in his old age as forgetfulness began to set in for him.  I adored the ending, perhaps the only tv ending that I really loved.

3)      Then there is Meriadoc Brandybuck and Peregrin Took from LOTR, a far better bromance than between Frodo and Sam, IMHO.  Why?  There is something special between two men who think up First Breakfast and Second Breakfast.  Their reunion is nothing short of tear jerking as Pippin frantically confirms that Merri is alive.  "I knew you'd find me.  You can't leave me," Merri says.  "No, I'm going to take care of you," Pippin answers. 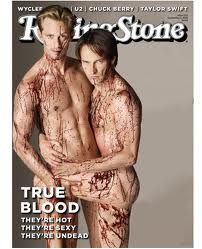 4)      Eric Northman and Bill Compton.  Really, do the names need any more introduction?  Okay, two vampires fighting over the same woman, but we all know vampires are very promiscuous so why don’t they all just get along?  So why?  In the books the two men hate each other but on the screen their chemistry lights up.  The fantasy Sookie has where all three of them are getting ready to oo la la was wow wow wow! 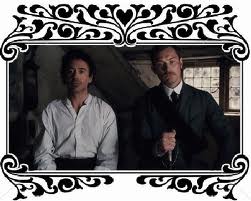 5)      And last, but not least, Holmes and Watson, as portrayed by Robert Downey Jr. and Jude Law.  Why?  The first movie is full of long suffering glances and pauses from Holmes each and every time Watson mentions his forthcoming marriage.  The two men gravitate toward each other in each scene they are in, as if a magnet is bringing them together.  Yes, each one has a woman but we all know that these men could never live their lives without one another.  I’ve not seen the second film yet, but I heard it’s really good!
As I said, there are many bromances I’m overlooking.  In LOTR alone there are about half a dozen!  And Yes, I didn't include Harry and Ron.  The ones I've mentioned are just five of my personal favorites.  They are men that when you think of one you can’t help but think of the other.  Sexy on screen, sexy in fan-ficiton!
Posted by Beth D. Carter at 4:17 PM