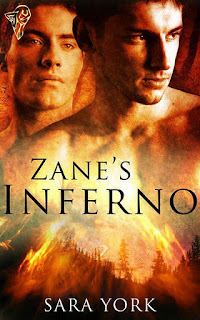 Hi I’m Sara York and I’m so happy that Beth invited me to her blog. I write mostly
Male/Male romance books with a few females thrown in for fun. On January 16th
Zane’s Inferno in His Hero Anthology releases. Zane is a gay firefighter in south
and he’s not out of the closet. When Zane is almost killed in a fire he finds out
that his secret isn’t a secret to everyone.
Zane's Inferno by Sara York
Zane's Inferno—when burning, hot lust ignites into raging love.
After being trapped in a fire, Zane Wilson is shocked by the heat directed his way
by Nick Dubois, the fire department's top paramedic. Nick comes on to Zane, kissing
him in the bunkroom and surprising the hell out of him. The next day, Nick shows
up at Zane's house and the fireworks really begin. The sex is rough and hot, not at all
like anything Zane has had before.
Their relationship began because of a fire then almost ends because of one. When
Zane is trapped in a forest fire and almost killed, Nick moves in and doesn't leave his
side. But a jealous ex is setting up Nick...and gunning for Zane. Will they survive they
survive the firestorm created by their relationship, or succumb to the flames?
Excerpt
Zane Wilson inched forwards, barely able to move. Heat from the fire was baking his brain through his helmet. They were going to call him back any second. The swirl of the fire and the intense heat meant only one thing—this building was about to collapse. The stairs were engulfed in flames, blocking access to the upper floors. This had to have been deliberately set.
“Portable One, this is Command. You copy?”
“Command, this is Portable One, Zane here.”
“Heat’s built up in the attic. Come out now. Over.”
“Portable One exiting the building. We’re coming out. Over.”
James, his hose man, slapped him on the back. They’d moved back three feet when he heard the loud crack over the roar of the fire. The three-storey mansion was coming down around them.
“Run!” James shouted over the intercom just before he slapped Zane again, this time on the shoulder.
Zane dropped the hose then turned to run. They both dashed for the door.  Zane saw a huge beam fall and he shoved James out of the way before he jumped back. A wall of fire surrounded him, blocking his exit. His oxygen tank alarm went off, signalling the end of his air supply. He would die in a few minutes if he didn’t escape the raging beast. Smoke seared his lungs, leaving him nauseous and dizzy. His tank should have lasted longer. Someone had given him an empty
one. His stomach turned as he fought to remember who had given it to him. The flames grew stronger so he forgot about the tank and searched for a way out.
The fire died down to his right for just a few seconds. He braced himself for the heat and leapt through the uneven wall of flames. The fire burned him but he kept going, pushing his way into the living room. The heat was less intense as he made his way through the smoke-filled room. On the far wall he saw a window.  He grabbed his hooligan tool and tried to smash out the glass. The bar bounced back, smacking his visor. Shit, Plexiglas.
Zane pulled the lock on the window and tried to shove the pane up, but it wouldn’t budge. The heat, maybe paint…something was making the window stick. He tried again as chunks of house dropped to the floor behind him like bombs on a battlefield. He reached up, grabbing the sides of the window frame. There was a security rod preventing the window from rising. He pulled out the metal rod then slid the window up. Oxygen rushed in, fuelling the fire. The blaze snaked its way across the ceiling, straight towards him.
The curtain around the window burst into flames. He jumped back. Pain seared his shoulder as a beam fell and crashed into him. This was his one chance. Zane jumped forward, diving through the smoke and fire, landing and rolling to his knees. He ignored the pain racing through his body as he crawled to a standing position.
Noise split the air as an explosion ripped through the house. Heat pushed him forward, and for a brief second he was airborne. He hit the ground with a solid thud. Fire and ash rained down around him.
Website http://sarayork.blogspot.com
Facebook https://www.facebook.com/sara.york1
Posted by Beth D. Carter at 5:25 PM