Contest to win IN A CHORD! 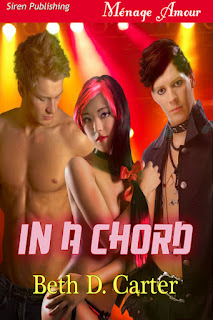 Keaton Gates and Ashland Lance are lovers and musicians in a band called Endymion. Keaton believes there is something missing, not only from the sound of their music, but also in their lives. When he hears Momo Willows singing Endymion’s signature song, he knows she’s the muse he’s been waiting for.
At first, Ash Lance is jealous of the new girl in Keaton’s life until he meets her. Momo is unlike anyone he’s ever met, and they soon discover that they connect on many levels. But he’s reluctant to take her away from Keaton, just as Momo refuses to come between them.
Keaton is quick to assure them he wants all three of them to learn to be in a ménage relationship, but as they learn how to live and love together, another threat is moving between them, threatening to take Momo away…forever.

**Release day is THURSDAY, May 31st!  Blog contest will start Friday with a winner's name drawn on Monday!  All you have to do is leave a comment (and don't forget to leave a way to contact you!).  One randome winner receives the PDF version of In A Chord!
Posted by Beth D. Carter at 6:15 PM