The End of Robin Hood 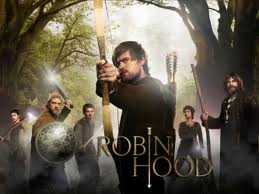 WARNING: THIS BLOG IS FULL OF SPOILERS!

Recently, I was able to finish watching the BBC show 'Robin Hood', thanks to Netflix streaming.  I had watched the first two series years ago (in Britain tv show seasons are called series) but had dropped Netflix before the 3rd & final series came out.

Truthfully, I wasn't sure if I wanted to watch the ending.  In the 2nd series finale, Marian is killed.  Run through with a sword and dies in Robin's arms just seconds after they marry.  I was totally in shock because 1) this is Robin Hood!  Marian can't die! & 2) I'm a romantic at heart so for true love to be ripped apart in such a manner is blasphemy to me. 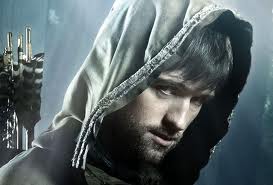 So I built up my nerve to watch Jonas Armstrong swashbuckle his way once more through Sherwood.  Let's face it, who wouldn't want to watch Jonas Armstrong do...well, anything!  The man is just divine!  But I digress, and believe me I can do a lot of digressing over JA.  Anyway, I watched the 13 episodes only to have him die by being cut with a poisoned dagger!  The only saving grace was the beautiful way Marian reappears. Robin takes her hand.  She pulls him up, embraces him.

He hugs her tightly and swings her around as light pours over them.  And then it flashes back to his hand and we see it fall away.  We hear his breathing stop.  He has joined Marian in heaven. 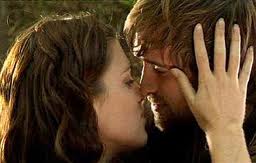 Okay, for the romantic in me that was potent stuff!

So why am I writing about a tv show that ended years ago?  Because viewers tune into a tv show because we fall in love with the characters.  We take their journey with them, wherever it may go, even if its only for a little bit.  And when a character we love dies, it's like losing a member of our family.  A piece of our heart dies too.  Yes, I know its all fantasy and make believe, but connecting with characters goes deeper than that.  We are able to live vicariously through them; a brief reprieve from our humdrum lives.

Characters who die onscreen stay with us for a long time.  Robin and Marian's love will remain in my memory each and every time I write a happy ever after.  Fictional they may be, that is why we watch television.  But after all, my world revolves around fiction and true love.

For me, nothing is greater.

***Next week, find out my thoughts about Xena's final episode.
Posted by Beth D. Carter at 5:10 PM