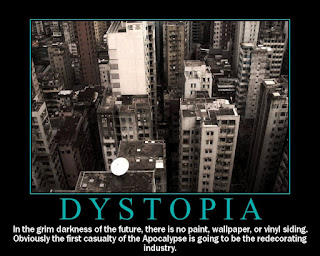 Though the idea of a dystopian society has been recorded differently in many novels, each tale presents a cold and unfeeling world, chilling to the bone and imagination.  And yet, we can’t get enough of them.  What is it that drives us to study these stories?  A direct contrast to the thoughts of a perfect utopia, we are made to read 1984 and Animal Farm in school, we write essays on Atlas Shrugged and The Handmaid’s Tale for college, learning about certain society behavior, and a bit of our own.  And we read it in popular bestsellers like The Hunger Games.

Movies about dystopian societies have tried coming to life from the pages of a book;  ‘Blade Runner’, from Do Androids Dream of Electric Sheep, and ‘The Running Man’, who was written under Stephen King’s alias of Richard Bachman.  Popular themes are dehumanization, totalitarian government, and post-apocalyptic society, some of my favorite films are 'Equilibrium', 'Logan's Run', 'Akira', 'Serenity', 'Mad Max Movies', 'The Running Man', and 'Total Recall'.

I’ve even tried my own version of such a world in my erotica romance novels, Spirals, and its sequel, Kismet.  I’ve enjoyed creating such a future so much I’m sure these won’t be my last venture into it.  I have written two strong females tested to their very brink of breaking.  I absolutely loved pushing, not only my characters, but my own limits as well.

But what draws into such grim glimpses into a future?  Is it the hope we never face it ourselves, or the thought we could be headed that way?  Do these stories make us happy to have the lives he have?  Or do we connect to the hero/heroine in a fundamental way?  Maybe it’s the fight of the human spirit that we enjoy the most, connecting with a hero or heroine and going on the journey with him or her.  Second guessing their decisions or trying to problem solve with them, as well as watching him or her over come almost impossible odds in an environment we hope never to find ourselves.

Some of my favorite dystopian romance stories are Countdown by Michelle Maddox and the Matched series by Ally Condie, Legend by Marie Lu, but there are a slew of others on my to read list.  Anyone have any suggestions for reading material?
Posted by Beth D. Carter at 8:08 PM