There isn’t any doubt that Zombies are the new IT monster.  We’ve had ghosts, vampires, and werewolves and now, finally, the Zombie is getting the respect it deserves.  Admittedly, Zombies are a harder sell.  They’ve gotten a bad rap over the countless depicts on screen as being mindless flesh eating creatures….and yes, they are, but I think there’s more to a Zombie than that.

Zombie themed love stories are starting to filter into Young Adult titles.  Books like Dearly Departed: A Zombie Novel by Lia Habel, Alice in Zombieland by Gena Showalter, and Chivalry is Undead (Just Another Zombie Love Story) by M.A. Rogers are starting to grace bookshelves.  It's a theme that's catching on, and not just in print.  Warm Bodies by Isaac Marion is an upcoming motion picture set to be released next year.
I have my own idea for a Zombie romance but since I’ve got a list of stories to write it might be a while before that story sees some life…no pun intended.

Now, I’m not a big horror fan, so I have to admit that I haven’t seen that many Zombie flicks.  My favorites are ones that have a little humor thrown in, so my #1 favorite flick is Shaun of the Dead.  #2 is Night of the Comet (though some will argue that this is not a Zombie movie). And finally, #3 Zombieland.

Zombie legends are steeped in the occult of African Voodoo to Haitian Vodou, and described as a person without consciousness or self-awareness.  The Oxford Dictionary states that the word “Zombie” first appeared in English when Robert Southey mentioned it in his book History of Brazil(1810).  Yet how the person is turned into a Zombie, either living or dead, has many different connections.  In modern day culture, we’ve taken it a step further by making it a disease, or a plague.  And with the way this world is going with biological warfare, it doesn’t stretch the imagination all that far, does it?

I guess what makes Zombies truly terrifying is the thought of someone possessing us, our life after death being controlled by either our curse or our desire to kill others.  Zombies don't get to be cool like Vampires or strong like Werewolves.  All they get is blood and gore and maggots wriggling out of eyeball sockets.

So are Zombies more science or science-fiction?  Are they truly scary, the stuff of horror best stayed in the dark to terrify those brave enough to enter their realm?  Or can they be given a chance to evolve, become more than just mindless creatures?  Die hard fans might be horrified at the notion that Zombies could be more but fans like me looks for an angle to make Zombies more…well, human.  I’ve never been much interested in monsters (including the human kind) that kill for no more reason that to “Eat...brains…” but finding the spark of humanity left intact, or finding how Zombies can bring humanity closer, to me that’s fascinating. 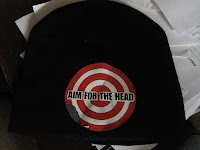 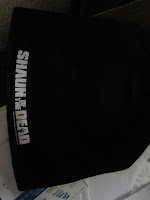 Up for one lucky winner is this pictured Shaun of the Dead hat (front & back).  It’s rare, I’ll tell you that!  And though not in perfect shape, it’s still awesome to add to any collection.  This cap is a promotional item someone gave me, and though I treasure it, it’s been stuck in a container in my closet.  It really needs to find a good home.  As you can see, some of the bullseye is starting to come off, but the cap is still pretty cool!.  So if you'd like it, all you have to do is leave a comment!  My trusty assistant…AKA: Son…will pick one name at random.  So make sure to leave an email so I can contact you!  Thanks for visiting with me today and be sure to hit the other in the hop!
Posted by Beth D. Carter at 1:25 PM