Since Halloween is approaching, I decided to go with a passage from my novel “Otherworldly”.

She lay half draped over his waist, which allowed his one good hand to run down her back. She’d worn a tank top and tiny, frilly panties to sleep in. His fingers were just able to stroke the soft skin where her ass cheeks played peek-a-boo with the elastic, and her body shivered against him, and it wasn’t because she was cold. Knowing she was awake and knowing he had the power to make her shiver sent his libido into overdrive. Heat flooded through him, causing his dick to spring to life. He wanted her. Holy Christ, he wanted her. Would there ever be a time when he didn’t want her? 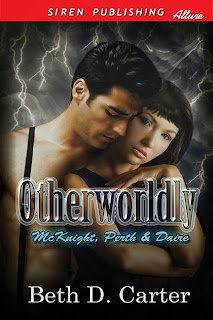 Ignoring the burn in his injured shoulder, he used his good hand and body to roll her only to her back. Her eyes looked up at him in the moonlight-infused room, and he could read the desire on her face like a neon sign.
Fuck! She was so beautiful.
“I want you,” she whispered, and there was a raw intensity in her voice he’d never heard before. “Now. Right now.”
She reached down and began wiggling her hips. It took him a moment to realize she was trying to get her panties off. He wasn’t much help with his bandaged arm, so he eased back enough so she could get the job done. To his surprise she pulled his pajama pants down as well, not off him completely but enough to allow his now throbbing cock to burst free.
++++++++++++++++++++++++++++++++++++++++

**Be sure to check out the others of Saturday After Dark!
J S Morbius: http://morbiussworld.blogspot.co.uk/
Pablo Michaels://www.pmmanmanromance.com
Ray Sostre: http://theafterdarkworld.blogspot.com/2013/09/saturdays-afterdark-moments-09282013.html?zx=272339e3bbb981a0
Posted by Beth D. Carter at 8:55 AM