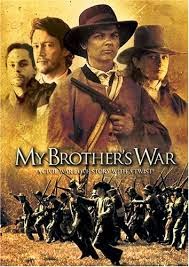 On the day of her engagement, Grace Kieler finds her family and fiancé divided on political matters. With her future husband off to join the Union army and her brother vowing loyalty to the Confederates, she is torn. She promises her father that she will protect and care for her brother. Upon her father's death Grace decides to cut her hair, don her brother's clothes, and take his name to join the ranks of the Rebel army. She must find him and keep him from getting killed. Along the way, she meets Virginia Klaising, a widow and mother grieving the death of her only son. Virginia begins to fall for this Rebel 'boy' as they travel the backwoods avoiding both armies trying to get back home. By the same turn, Henry (Grace) finds himself comforted by this unfortunate woman. Together they are able to mend the wounds that tear the underpinnings of the heart. As love blooms and the secret becomes harder to conceal, the two realize that they have something precious---an unspoken candor that reveals the soul. When Henry is shot and brought back from most certain death, the secret is revealed and yet the bond grows stronger. After living through such brutal loss and watching the carnality of war unfold before them, they realize they only have each other. And yet it is more than enough. It is the balm that soothes---the quiet whisper that comforts. Each becomes a beacon in a time of great darkness, though their journey is short-lived as each must reach a destination without the other.
-Synopsis from IMDB (Written by writer, director & actress Whitney Hamilton)
++++++++++++++++++++++++++++++++++++++++++++++++++++++

What drew me to this movie was the idea of a female fighting in the War Between the States.  I've read several documented cases, but I've never seen such a movie.  And then I found out that it was listed in the LGBT section, so I knew I had to watch it.

There are mostly bad things to say about this movie: bad editing, bad directing, bad filming.  The first twenty minutes of the film left me confused and wanting to stop watching.  The story lines were choppy and all over the place and I was really confused what was going on.  But something had me continuing on and so once I got to Grace's father dying, then the story became a little slower, more linear, and therefore, more bearable.

Really, why I kept watching was that I began to find Grace's metamorphosis into Henry fascinating.  Her brother has agreed to become a spy, so he hides his Confederate uniform.  Grace doesn't know about this so when she finds it, she dons it, cuts her hair, and takes off after him to find him and make sure he doesn't get killed.  As she wanders through the hills of Virginia, she stumbles into one battle after another. And when she meets Virginia, she clicks into being Henry.

What's also interesting about this story is the underlining arc of her brother's, the real Henry's, spying because the man sent to catch the spy is none other than Grace's ex-fiance.  There are several twists throughout that begin to cohere into an interesting ending because at the heart of it all is the relationship that develops between the two women.  Virginia had a plot of land that the Union confiscated.  She hid her son in a trunk in the house while she went to go to the commander, but he ordered her house burned to the ground...which her son was still inside.  That was heartbreaking.  Even when she discovers that Henry is a woman, the bond between the two just gets stronger.  The chemistry between them is palpable although they never do anything more than share one kiss.

So, while this movie had a horrible beginning, a rusty middle and a squeaking end, I was taken with the journey Henry(Grace) went on.  Would I recommend this film?  No.  Not unless you understand that it was a bad film with an interesting story.

**But let me point out, if you know anything of Civil War Battles, then don't be surprised this film gets it wrong too.  Ms. Hamilton used reenactors to get her war scenes and let's just say they're not the best historians.  That being said, I thought the women's clothing was pretty accurate.