Halloween is just around the corner and with it the fear of every bump in the night.  Emerging from the
shadows of vampires and werewolves are zombies.  Now, admittedly, zombies are not sexy, they aren't romantic, and they certainly aren't stuff dreams are made of (no matter what the film "Warm Bodies" would have you believe).

For me, zombie stories aren't about blood, gore and shock value.  They are about human stories of survival, how to cope with such a cataclysmic change.  So with that in mind, I envisioned such a world trying to exist in this bleak disease infested world and came up with Atticus and Kit's story. 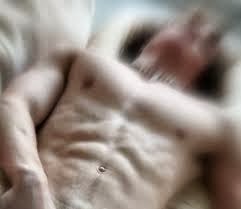 The man stretched and looked up at the sky that was beginning to lighten up. Streaks of violet were mixing with bands of gold. Then he bent and took something from his backpack and then began to strip. And for the life of him, Atticus could not tear his eyes away.
Off came the long-sleeve cotton shirt, revealing a much slimmer physique than Atticus had first thought the man possessed. Muscles were present, but they were streamlined and smooth on a body that either had no body hair or was so fine that the hair could hardly be seen. Next were the pants. The man wiggled his hips to shimmy them off, leaving him standing in a pair of body-hugging long johns that ended at his knees. Atticus figured the man wouldn’t take them off, but his jaw fell slightly when the man pulled them down as well.
He stood gloriously nude, and Atticus felt his dick harden in his pants.
The man’s cock was long and slender, curving elegantly upward instead of pointing out. He grabbed a rag and poured some water from a bottle onto it and gave himself a quick, old-fashioned bath. Atticus felt his mouth go dry as he watched the strip of material run down the man’s chest, caressing each dip and curve before tracing over a flat stomach and lean hips. When the man reached his cock and balls, he slowed down the impersonal wash. With his heart pounding, Atticus watched as the man cupped his balls with the cloth, squeezing them while he fisted his dick.
Please! Do it!
Atticus silently urged him on. Some vague, distant voice warned him that perhaps this wasn’t right, spying on the man like this, but Atticus didn’t listen. Right now he was following the direction of the little head that currently throbbed inside unforgiving denim. He unzipped his pants and slid his hand inside to palm himself, giving his shaft a little squeeze.
+++++++++++++++++++++++++++++++++++++++++++++++++++

The world has changed.  No one knows how the Z-disease happened, but no cure is available.  Humanity is a forgotten concept and to survive the scavengers and roaming plague scouts, one must blend in or become invisible.  And above all never trust anyone.

Atticus is a loner, avoiding human contact as much as possible.  Until he discovers a young man on his own in the deserted wasteland and he can’t help but be curious.  So he watches, content to admire from afar.  But when bounty hunters come for the young man, he makes the choice to step in and save him.

Kit escaped the brutal confines of imprisonment just before he was to be sold into being a sex slave.  But the slavers aren’t the only ones who want him.  The underground scientists have finally found him, and they want him because he’s the only person born immune to the plague.

Kit might be wary of the handsome loner but he realizes Atticus might just be the person he needs to stay safe, if only he didn’t feel so attracted to the man.


A Wanted Man will be available soon through Siren!
**Be sure to visit the others at Saturday After Dark http://theafterdarkworld.blogspot.com/