My boyfriend kept urging me to write a take on a fairy tale...so I did.  I took "Sleeping Beauty" and did my
own sci-fi version of the story...plus adding in a menage!  At first I was going to call it "Cold Beauty" because I worried that some might judge it because of Ann Rice's stories (The Claiming of Sleeping Beauty) but mine was completely different from hers, so I went with the title.


As he continued his downward path, he bypassed the apex of her thighs, where he could smell her musk beckoning him. God, he wanted nothing more than to sink his steel-hard cock into her wet cunt and pump her until they both splintered apart. But whatever sanity he had left raised a red flag. He couldn’t take her virginity here, in some dump heap station and he definitely couldn’t take her without Noah beside him. They were partners, in every sense of the word. And although he knew Noah had feelings for Alivia, they hadn’t gotten around to talking about the items they’d agreed to when they decided to become lovers.
One of those hard limits had been no other sexual partners. 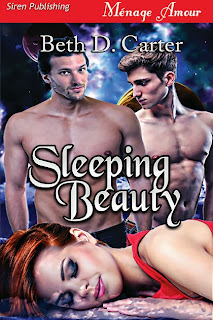 And he knew, technically, what he was about to do with Alivia was a violation of that agreement in an abstract way, but damned if he could keep the logistics straight. His higher brain functions fled. He was going to make damn sure she would turn all gooey at the thought of him, that she would invite him and Noah back into her arms and into her body very, very soon. Once her pants were off, he returned to where her thighs clenched together.
“Open for me, sweetheart,” he murmured enticingly.
Exerting a little pressure, she slowly relaxed and let her legs open. He got his first glimpse of her pretty pussy, all plump and swollen with her desire. Moisture glistened around the curls covering the hood. He ran a finger gently through them, barely brushing against her slit and a moan erupted from her lips.
“Fuck, you’re wet,” he murmured. Then he kissed her, right on the spot he’d just touched and her hips jerked up, bumping against him.
“Ronan,” she breathed. “Oh, Ronan.”
“You taste so damn sweet, honey.”
He pressed his tongue against her again, as far as it would stretch, dipping a little into the slit. She moaned again and the little sound took him over the edge. He had to fully taste her now.
“I’m going to stick my tongue in you now,” he told her. “I want you to come so I can lap up your cream. Let yourself go, baby, as many times as you can.”

Ronan Hark and Noah Kabot are deep space salvagers, partners in business as well as in life.  While investigating an old ship they discover a cryo chamber holding the frozen body of a beautiful woman who’s been asleep for thirty-one years.  Against Ronan’s better judgment, they take the chamber and wake her up.

Alivia Carian has spent her life living as a sheltered yet unloved princess, until the day she is forced into cryostasis.  It was only supposed to be for a short time, but somehow her ship crashed and she became nothing more than a memory.

But now everything has changed.  A hunter is after her and killing anyone who knows she’s alive.  As they race across the expanse of space, can Ronan and Noah keep her safe?  And what happens when she finally returns home to confront a life that forgot about her?


**Be sure to check out the other for Saturday After Dark at:
http://theafterdarkworld.blogspot.com/2013/09/saturdays-afterdark-moments-09282013.html
Posted by Beth D. Carter at 7:10 PM