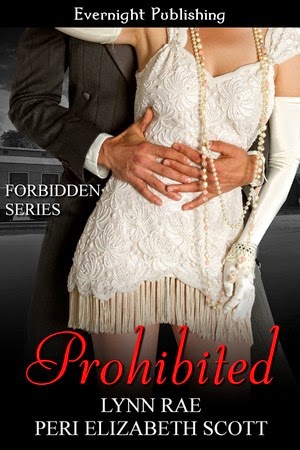 Thank you so much for visiting Written Butterfly to talk about your new release “Prohibited”!  I adore the Roaring Twenties so I wanted to get some information about your book.

Q:  Could you tell us a little about “Prohibited”?

Prohibited features a handsome owner of a speakeasy, when prohibition is a watch word. He hides another secret, one that could get him killed, given his public flaunting of societal conventions. When he meets a modern woman who disapproves of his career choice, their courtship is stormy, but it’s her innate sense of honor that saves him in the end.

Q:  How much research did you do for this book? Did you find any cool tidbits in your research?

Lynn Rae: I did a lot of research with period newspapers and some secondary sources, especially when it came to women’s reproductive health. In a former life I was an archivist and the Teens, Twenties, and Thirties were decades I had a lot of experience with, so I relied on my own familiarity as well. One interesting fact about the Twenties that plays a part in our book is during that decade, the Ku Klux Klan was very popular in Ohio and had ties to the Women’s Christian Temperance Union, the group that was instrumental in bringing about the twenty-first amendment to the U.S. constitution.

Q:  Since you wrote “Prohibited” together, how was that collaboration?  Is it hard to write with a partner?

Lynn Rae: I didn’t find it difficult at all, it was great getting to be creative with someone who ‘gets’ me. Writing is solitary work, and it was so nice to have that immediate give and take with someone. It was also great that we got a sexy book out of it too!

Q: I see that is this part of the “Forbidden Series”.  Is the next book set in the Roaring Twenties?  Can you give a little hint about what’s to come?

Peri Elizabeth Scott: The next book in the series is set later in the twenties, when things are a tad less roaring as the country edges toward the Great Depression. It features some of the characters from Prohibited, another unlikely couple who are another wonderful example of how love conquers all.


In the early 1920’s in Lima, Ohio, John MacDonald Adair hides his speakeasy from the law, and his mixed heritage from the KKK, mingling with the rich, piling up the cash and taking his pleasure within the ranks of the flappers who patronize his speak.

Lilly Townsend is a serious, modern woman, a suffragette and temperance advocate with nothing to hide and no patience for the frivolity of the times. And she doesn’t break the rules—yet.

Such disparate souls should never meet, but Fate conspires otherwise. Powerless against overwhelming chemistry, and something far deeper, Mac and Lilly must make some difficult choices and face down societal mores—together—to attain their happily ever after.

Author Bios:
Peri Elizabeth Scott lives in Manitoba, Canada. She and her husband have a wonderful son, and a house full of animals. She recently closed her part time private practice as a social worker and child play therapist to spend more time with her husband. Peribeth has written for years, mostly short stories and poetry, and reads everything she can lay her hands on. She has just begun to pen contemporary romance, although has published dark erotica under another pen name.

Lynn Rae makes her home in land-locked central Ohio after time spent in the former Great Black Swamp, beside the Ohio River, and along the Miami and Erie Canal.  With professional experience in fields ranging from contract archaeology to librarianship along with making donuts and teaching museum studies, Lynn enjoys incorporating her quirky sense of humor and real-life adventures into her writing (except the naughty bits).  She writes sci-fi, contemporary, and historical romances.