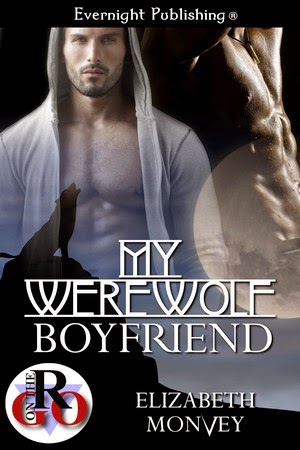 Hello Elizabeth!  Thank you so much for visiting Written Butterfly with me today!

I love shifter stories and paranormal in general.  I've read so many werewolf stories and I wanted to create my own spin on the genre.  The Syfy tv show "Bitten" was my inspiration of Tony and his family, and what that culture needs to do in order to maintain it's secrecy.  Aaron is a little too independent, a take matters into his own hands sort of guy, and exactly what Tony needs.

I listen to soothing music.  I once read that music helps calm the mind to get it focused, and I really think that's true.  When I put in my ear buds, I'm immediately ready to write.

Q) Can you tell us a little about your series?

I love paranormal stories and even though most of the books of written are contemporary, I had stories in me dying to come out.  I came up with the titles, My Werewolf Boyfriend, and though how easy it would be to switch out the name.  So I came up with "My Boyfriend Is..." series.  So far I have this one, My Vampire Boyfriend, and My Alien Boyfriend.  I've started on My Ghostly Boyfriend.

Aaron and Tony’s relationship is going strong after almost a year, except for once a month when Tony has to return home to check on his uncle.  Aaron feels slighted because he’s never included, so he decides to take matters into his own hand and follows Tony.

Tony Lykes can’t tell the love of his life that he’s descended from a long line of werewolves.  But when Aaron shows up in the middle of a werewolf battle, he’s sentenced to death in an effort to keep the werewolf pack a secret.

Now Tony, who is an enforcer of his pack, has to make the decision of upholding the werewolf law or defying protocol and customs to turn his very human mate.

“I want you naked,” he said, almost ordering Aaron to take his clothes off. His lover backed away and began a strip tease, taking way too long to remove his t-shirt. Tony hurried things along by letting his claws extend to rip Aaron’s pants and boxers off.
“Jesus!” Aaron cried, his eyes wide.
“Don’t be scared. I’d never hurt you.”
“I wasn’t scared. I was thinking that comes in handy, eh?” An eyebrow went up. “I suppose I’ll get those.”
“Shh,” Tony said and placed a normal finger on his lover’s lips. “Not now. Tomorrow we’ll revisit this supernatural madness.”
“Yes,” Aaron agreed. He lifted his head. “Kiss me, Tony. Fuck me.”
Tony groaned at the invitation and cupped Aaron’s head, tilting it slightly to fuse their mouths together. Right now he couldn’t take things nice and slow. He was beyond slow. Seeing his mate in danger tonight had fired his wolf up and what he needed now was to claim Aaron.
The werewolf way.
Their sex life had consisted of ordinary human sex. And yes, it was fucking hot, but his wolf wanted Aaron’s submission because he’d almost lost him. Tony broke the kiss and looked into Aaron’s passion filled eyes.
“Get on the bed, hands and knees, and bow your head down,” Tony ordered.