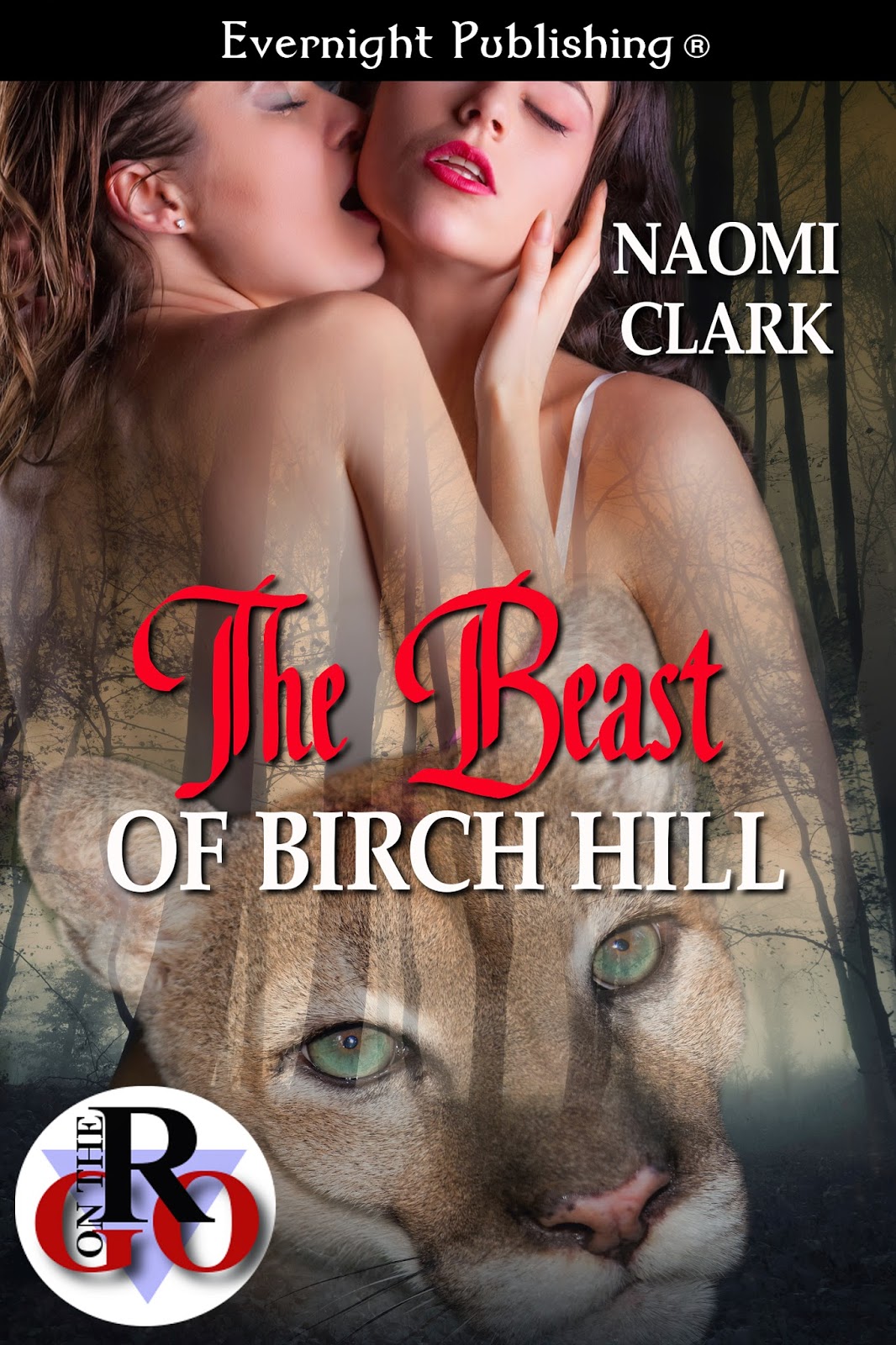 Hello Naomi!  Thank you so much for visiting Written Butterfly with me today!

Q) How did you come up the dynamics of your characters?

I always love it when strangers come into small towns – it just makes for so many possibilities. When I came up with the idea for The Beast of Birch Hill, it was almost necessary to play that dynamic, and have Emma be a newcomer with no clue about the people she was about to meet. And to have Abi be both her guide in this new environment, and part of it's mystery, just felt perfect.

I've recently become addicted to making mood boards on Pinterest. I like to have a soundtrack as well, a few songs that make me think of my characters or the overall theme of the story. For The Beast of Birch Hill, I spent a lot of time watching documentaries and listening to podcasts on cryptozoology and monster-hunting!

I have so many...My main focus at the moment is an urban fantasy novel which revisits the idea of a stranger coming to a small town with secrets, but it's going to be very different to this story. After that, I have about half a dozen short stories and novellas in various stages of completion. I'm leaning towards finishing the one about selkies...but who knows where I'll end up!

Blurb
Wildlife photographer and cryptozoology blogger Emma Jordan came to Birch Hill expecting to find another urban legend. The rumours of a big cat stalking the woods around this quiet town surely had to be just that - rumours. But when the evidence starts to pile up that Birch Hill really does have a killer cat on the loose, Emma finds herself caught in a confusing game of cat and mouse. And her blossoming relationship with Abi Blakely might just be pushing her further into danger.

A couple of hours later, showered, changed, and feeling human again, Emma headed back to Abigail's Bakes. She told herself she was just looking to grab a quick lunch and sit somewhere pleasant while she updated her blog. Privately she had to admit it would be nice to just look at Abi while she worked.
The place was much busier than it had been that morning; it was full of kids and families jostling for table space. Abi and a younger girl worked the counter with cheer and ease, and cafe was filled with chatter and laughter. Emma joined the queue, trying to catch Abi's eye. When Abi saw her, she waved and favored Emma with that infectious smile.
“How was your hike? Did you catch the Beast yet?” she asked Emma as she served her.
“Not yet. Maybe later.” Emma picked out a bacon and cheese strudel and a spiced apple muffin. “Do you have wifi in here? I need to get online.”
Abi passed her a slip of paper with a password on it along with her food. “Help yourself. Catch you later.”
Emma smiled, hoping the words weren't just a mere formality. She found a table tucked away in the corner and flipped open her netbook. Her main source of income was her photography, supplying stock images for websites and brochures, entering as many competitions as she could, and doing the occasional teaching course if she wasn't traveling. It was steady money, and a hefty inheritance from a grandparent she'd never met allowed her to live in comfort and indulge her other passion – the alien big cat stories. Her blog, After Dark All Cats Are Leopards, was one of the better-regarded in both the cryptid and sceptic communities and she had a steady following. When she'd announced last week that she was heading for Birch Hill, her views had skyrocketed, and even though she didn't have much news to add yet, it was probably a good idea to update now.
She plugged her digital camera into the netbook and uploaded the photos she'd taken, eating as she worked. The strudel and the muffin were both perfectly delicious, and she allowed herself a brief fantasy of kidnapping Abi and making her bake for her full-time.
She didn't notice Abi had joined her until the other woman pushed a cup of coffee to her. “Looks like thirsty work,” Abi remarked.
Emma jumped, then grinned. “Bloggers are powered entirely by caffeine. Thanks.”
“So I looked you up after you left,” Abi said. “Why big cats?” She leaned her elbows on the table and rested her head in her hands. Her dark curls framed her face perfectly, her expression attentive and interested. Emma squirmed a little under her keen gaze.
“When I was a kid I wanted to find Bigfoot,” Emma confessed. “My dad used to take me out hiking in the Rocky Mountains and tell me stories about Bigfoot and skinwalkers, all kinds of stuff. I just loved it. Then I grew up and decided there wasn't much chance of Bigfoot really being out there. But big cats? Definitely.”
“You're so sure? Even though nobody's found a breeding population of wild tigers anywhere?” Abi asked with a grin.
“America's a big country. There's plenty of space for wide-roaming animals to hide. And big cats are generally elusive in their natural territories anyway. Yeah, I'm sure. People brought lions and tigers over here with circuses in the nineteenth century and there are thousands of people keeping them illegally today. There are orphanages for abandoned exotic animals up and down the country. It's not completely ridiculous that some escape or are released into the wild. And cats are so adaptable. Even if we're not talking big breeding populations, I think it's more likely that there are non-native big cats out there than not.”
“You love this stuff, don't you?” Abi said, looking thoughtful.
Emma flushed. “Was I rambling?”
“No, it's interesting! I wish I could come out big cat hunting with you, but Jed probably wouldn't let me.” She stuck her tongue out as if she'd eaten something distasteful.
“Well, he's not coming either,” Emma said. “I take it he's more than just prickly with you?”
Abi shuffled Emma's empty plates around, looking embarrassed. “Oh, we just...clash. He's pretty conservative and I'm not. He thinks I lower the tone of the neighborhood.”
“Not a fan of baked goods?” Emma joked.
“Baked goods or lesbians,” Abi said with a shrug.
Emma's heart gave a little twist, but she kept her tone calm and amused as she replied. “Oh dear. I'd better not answer any personal questions he asks me then.”
Abi gave her a thoughtful look again that turned into a shy smile. “So what are you doing for the rest of the day? I'm off this afternoon.”
“I'm going back into the woods this evening but I'm free til then. Maybe...” Emma searched for something that didn't sound too forward but still made it plain she liked Abi. “Maybe we could hang out?” Ugh. Lame.
Abi didn't seem to notice. She flashed a dazzling smile. “How about a guided tour of Birch Hill? There's not much to see, but with the right company it has a certain charm.”
“It's a date.”
Abi stood, grabbing Emma's plates. “Give me an hour and we're on.”
Emma watched her sashay away with a flutter of excitement. If the Beast of Birch Hill didn't show up, Abi might prove just as exciting.

About the Author
Naomi likes writing, perfume, fancy tea, and unfathomable monsters from the dark spaces between the stars, not necessarily in that order. She has been writing stories ever since she learned how to write, but is still trying to master the art of biography writing. When she's not dealing with werewolves, demons, or sea monsters, she's hanging out with her cat and probably watching a documentary about Bigfoot. If the cat isn't available, she's with her fiancé watching cookery shows and silently plotting her next book.