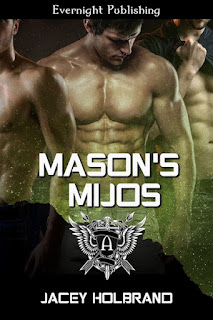 
It’s not exactly what Mason had expected.


Can he continue to love each of them while trying to survive the life changing events and all the revelations the weekend has in store?


The first story in the series (The Encounter) was meant for an anthology. It wasn’t accepted for that but was requested as a separate story. Breeding Seth is the second book in my “The Agency” series followed by Cooper’s Condition then Mason’s Mijos. Originally this series was supposed to be a bunch of different stories following different peoples’ dealings with paranormal and supernatural activities. But that idea changed with the writing of Breeding Seth. I guess you can say I wrote according to how the storyline unfolded along the way – romantic scifi with male pregnancies. So, the series follows Seth and his dealings with people who interact with The Agency and the conspiracy theory he comes upon. Mason happens works for The Agency and is filling in at a meeting for Seth when the story starts.


The ménage stuff because Mason and Flynn seemed to take front and center and Ryker came off a bit flighty. Trying to get the three of them in one spot took a bit of doing.


I tried to incorporate the research I did in such a way that it wasn’t blatant, so that might seem secret-like or discovering the info could be like finding an Easter Egg. To that effect, a little-known fact: Abductions are not always about "collecting DNA" or experimenting as many people think. Instead, it's often about creating incredible terror in abductees and harvesting the energy of that terror.(*) Which Zen learns first hand in the first book, The Encounter. (*: http://www.rense.com/general82/unpl.htm)


Have more faith and confidence in yourself. Contrary to some opinions (which that’s all they are) you are worthy and can do anything you put your mind to.


Flynn put down his drink and took Mason’s hands in his. “Haven’t I made that clear? I returned for you. I fought to come back because I love you.”


Mason kissed Flynn’s knuckles on one hand then the other. “And I love you. That’s what I decided. Who you are on the inside is what matters. Not where you come from or what you can do. I. Love. You. What can I do to help you with your mission? Find a woman for you to knock up? I’m sure my sister has some friends who’d be interested in you.”


“But if you don’t do what you need to, you’ll be sent home. Right?” Mason couldn’t imagine being without Flynn, never hearing his laugh or seeing his smile. He had to be able to do something to keep the love of his life on Earth.


“I know, and the thought of leaving you again just kills me.” Flynn appeared to think for a moment. “You know, I could transform my genitals long enough for you to impregnate me.”


Mason chuckled. A man, changing his boyish bits into girly parts so he could carry a baby? Given to him by his male lover? That’s one for the tabloids. “I gotta hand it to you. It’s an interesting idea, Flynn, but a gestation period will be much longer than a few minutes.”


“I realize that. I have a medication to speed up the process, so it’ll only take a few days to a week or so. I believe I can keep the small transformation of my reproductive system going until I deliver.”


“I don’t know, Flynn. As much as I always wanted a child with you, I don’t want to put you in danger. And what if it doesn’t work?”


“Trust me. I’ll do my best to keep myself safe and make it happen. If I have your child, I’ll have done my duty and given you the best gift in the world. If for some reason it doesn’t work, then I’ll have to bite the bullet and find an Earth woman to procreate with.” He squeezed Mason’s hands. “Please, Mason, say we can do this. Let me have your baby.”


If anyone ever had said he’d be having such a conversation in his life, he would have called them daft. Yet here he was. Talking with his partner about having a baby. Together. Without the medical intervention of surrogacy. Just him, Flynn, and nature taking its bizarre, in this case, course.